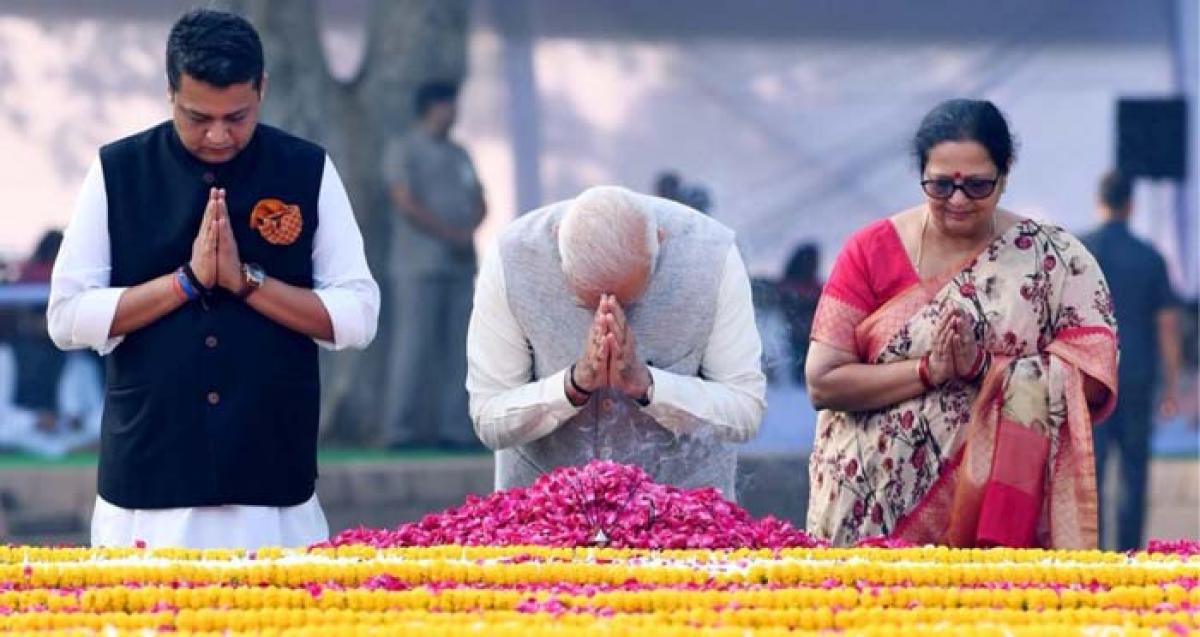 "Tribute to Bapu on the occasion of Gandhi Jayanti. Gandhiji's life was devoted to the ideals of peace, brotherhood and harmony. Today, there is an opportunity to replicate our allegiance and resolve towards these ideals. Mahatma Gandhi's teachings are relevant to the whole of humanity," Kovind tweeted early in the day.

Sharing his op-ed to national dailies on the occasion, the Prime Minister said: "From today we are entering Pujya Bapu's 150th anniversary year. It is a great opportunity for all of us to fulfill their dreams. #Gandhi150."

In his op-ed he said: "He (the Mahatma) remains a shining beacon of hope for millions of people across the world who seek a life of equality, dignity, inclusion and empowerment. The impact he left on human society has few parallels...

"Let us think about how our actions can contribute to a cleaner and greener environment for the future generations. Almost eight decades ago, when the threats of pollution were not as much, Gandhiji took to cycling...

Modi also tweeted on the "insightful op-ed" by Singapore's Prime Minister Lee Hsien Loong on "how India and Singapore are united in the pursuit of building a cleaner and better tomorrow for the coming generations".

Congress President Rahul Gandhi said truth and non-violence -- the two beacons of Mahatma Gandhi's life -- that he lived and died for, are India's foundation and true patriots must protect them.

"Gandhiji is not an immobile statue, he is a living set of ideas and values flowing through India. Truth and non-violence, which he lived for and was killed for are the foundation of our country. True patriots must protect them," Rahul Gandhi tweeted.