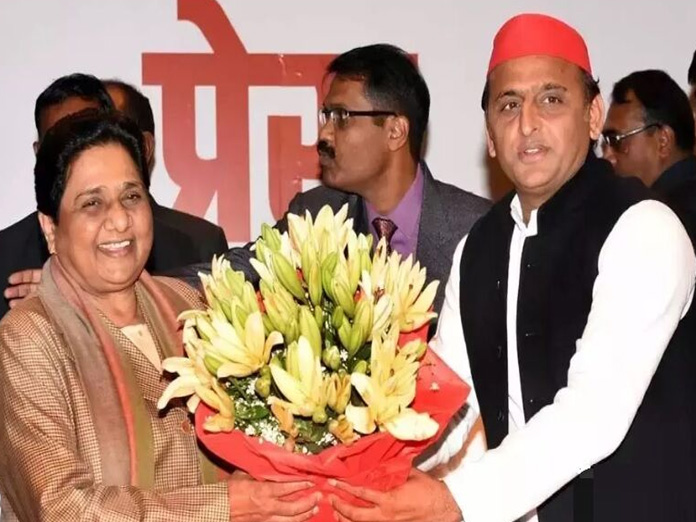 Both parties will be sharing 38 seats each out of the state’s 80 parliamentary constituencies. “We (BSP-SP) have decided to contest upcoming Lok Sabha elections together, this will lead to a new political revolution in the country,” Mayawati said. The parties, however, said they would not field candidates in Amethi and Rae Bareli, represented by Congress president Rahul Gandhi and UPA chairperson Sonia Gandhi.

Akhilesh Yadav said the alliance is necessary to “defeat the arrogance of BJP.” “It was necessary for BSP and SP to come together. BJP can go to any extent to create differences in our workers, we must be united and counter any such tactic,” he said.

"This...will rob 'guru-chela' -- Prime Minister Narendra Modi and BJP president Amit Shah -- of their sleep. I have full confidence that just as our alliance defeated the BJP in the Lok Sabha bypolls, we will crush the saffron party in the general election," Mayawati said, referring to the BJP's defeat in Phulpur, Gorakhpur and Kairana parliamentary bypolls.

In 2014, the BJP had won 71 seats in Uttar Pradesh while its ally Apna Dal bagged two. The Samajwadi Party won five seats and the Congress two, while the BSP drew a blank.

Explaining why the Congress was not included in the alliance, Mayawati said that during the Congress rule over the years, poverty, unemployment and corruption grew in the country and there had been scams in various defence deals. She also said that in case of a tie-up with the Congress in the past, the party did not gain. "In the past I have seen that our votes get transferred to the Congress, but not vice-versa.

We do not gain from alliance with Congress, whereas vote transfer is perfect in SP-BSP tie-up," Mayawati said. Drawing a parallel between the BJP and the Congress, Mayawati said the Congress had imposed the Emergency while the BJP is responsible for an undeclared Emergency.

The joint press conference was held at a posh hotel here after top leadership of both the parties had met in New Delhi recently to discuss broad parameters of the alliance to take on the BJP unitedly in the Lok Sabha elections.

To a question as to whether Mayawati could be the possible prime minister face of the alliance, Akhilesh said, "UP has given PM a number of times in the past and once again the next PM will be from UP." He did not, however, elaborate.