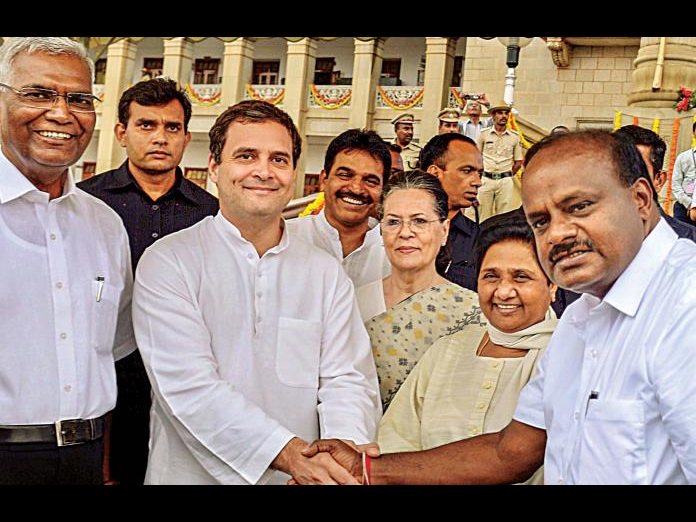 The CongressJDS ruling coalition in Karnataka on Monday held the second round of talks on the tricky issue of seat sharing for the upcoming Lok Sabha polls, with Congress saying they were moving in the right direction

Bengaluru: The Congress-JD(S) ruling coalition in Karnataka on Monday held the second round of talks on the tricky issue of seat sharing for the upcoming Lok Sabha polls, with Congress saying they were moving “in the right direction.”

The two parties had begun formal talks last week with the JDS insisting that 12 of the total 28 Lok Sabha seats be conceded to it, but party supremo and former prime minister H D Deve Gowda indicated on Sunday that they were ready to compromise.

The two allies, who had formed the government after striking a post-poll alliance as the May 2018 assembly elections threw up a hung verdict, had announced earlier that they would fight the Lok Sabha elections together.

JDS has put forth its demand with a list of candidates to contest for 12 seats. “We have not given a final shape to it. We will give it in the coming days,”

Siddaramaiah said. He added that the leaders were zeroing in on who can win and from where. Discussions have not been completed yet, but there was good progress, he said. “I hope that we will give a final shape in three-four days before March 10,” Siddaramaiah added.

The Mandya Lok Sabha seat has become a bone of contention between the two parties with JD(S) deciding to field Kumarasawmy's son and Deve Gowda's grandson Nikhil Kumaraswamy.

The JD(S) leadership, dominated by Vokkaligas, treats Mandya as its bastion, as the constituency has a substantial Vokkaliga population. On the other hand, multi-lingual film actor Sumalatha, widow of noted Kannada film star Ambarish, has also evinced interest in contesting from there on Congress ticket.

Asked about the JD(S) hinting that Nikhil Kumaraswamy would contest from Mandya even before the list got finalised, Siddaramaiah said, “Can we say no to a candidate who has winnability there?”

Ali said some more discussions were needed, but the final meeting would take place between Deve Gowda and Congress president Rahul Gandhi.

Seat sharing will be a major test for both parties as the JD(S), banking on two-third, one-third formula adopted in ministry formation and allocation of boards and corporations, has demanded 12 seats out of the total of 28.

The Congress is opposed to this, maintaining that sharing of seats will be based on “merit”. Also, there is pressure from within Congress not to cede too many seats to JD(S), especially the 10 seats where the party has sitting MPs.