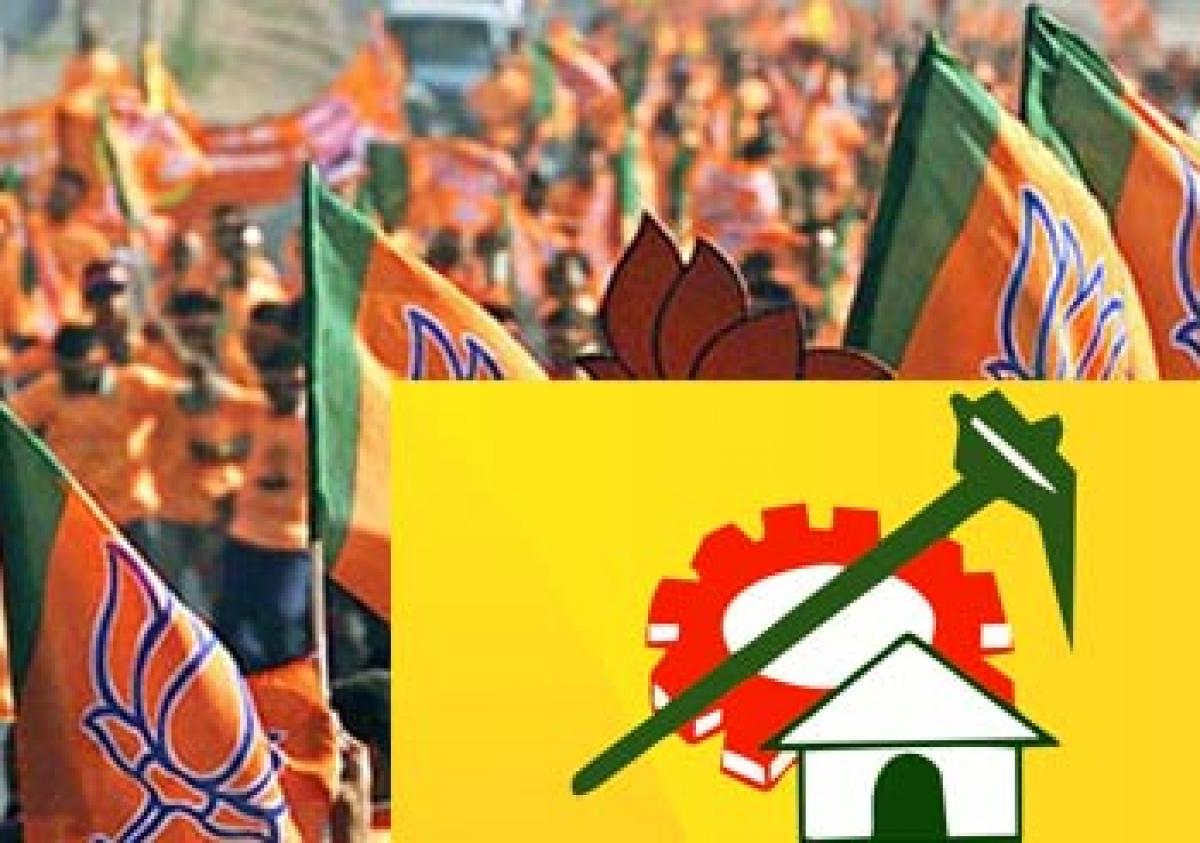 Now that the cat is out of the bag that there is going to be no special status, the TDP leaders feel that it is time to give up the practice of...

Now that the cat is out of the bag that there is going to be no special status, the TDP leaders feel that it is time to give up the practice of venting once in a while spleen on the Centre for going back on its promise and brace up for any possible break up with the BJP.

The party insiders say that the TDP had so far been making strategic moves to extract maximum benefit for the state by following the `alliance dharma’. But of late the yellow party had noticed some change in the attitude of its alliance partner. A section of the state BJP seems to be giving a wrong impression that it can emerge a real force to be reckoned with in Andhra Pradesh by 2019.

As far as TDP is concerned even now it wants to be an ally of the NDA government provided the Centre openly comes out with the kind of hand holding it would do for the state. The Centre should explain what alternative plans it has to help Andhra Pradesh and ensure that it would give equal benefit if not more than what it would have got if special status was accorded.

But what if New Delhi continues to play hide and seek is the mute question before the TDP. This issue will now be debated at the party Politburo meeting to be held on Tuesday. Senior TDP leaders say that the party has started bracing up for any eventuality. ‘Operation akarsh’ through which it had roped in about 16 YSRCP MLAs and is targeting another 20 or so is part of that exercise.

On the other hand it wants to build up momentum against the BJP on how it had failed to help the residuary state. If the BJP at the national level thinks that by 2019, it could join hands with YSRCP as some political observers predict then it would be committing political hara-kiri. So far Jagan has been attacking the Centre that it was not giving special status to AP and that TDP failed to put pressure on Centre.

If he joins hands with BJP how would he defend his act and what will he tell the people. In such an eventuality, TDP may not hesitate to have some understanding with the Janasena as well. All is fair in politics, TDP leaders say. They feel that if BJP joins hands with Jagan, it would only help the TDP to go hammer and tongs against both the BJP and YSRCP.

The statement of AP BJP floor leader P Vishunukumar Raju who is normally considered to be a balanced leader and supported the government when YSRCP MLAs like Bhuma Nagi Reddy and his daughter joined the TDP took a ‘U turn recently’ and said that those who quit YSRCP should resign and seek re-election has given further credence to the speculation that BJP was inching closer to YSRCP.

In the backdrop of this scenario, the yellow brigade has in fact already started a campaign that Jagan has been creating hurdles at the state level and has been giving negative reports against the government to the Centre that it was misusing Central grants and that the government was ridden with corruption.

Strengthening this argument YSRCP leaders who went to Delhi with Jagan claim that the Union ministers Rajnath Singh, Arun Jaitley and Dharmendra Pradhan had given an impression that they were not happy with TDP and that it was not giving due credit to the BJP for Centrally sponsored schemes being implemented in the state.

They further claim that the ministers showed much inquisitiveness when Jagan was making complaints against Naidu's rule in AP. This could also be a mind game by the main opposition party but if it is true then certainly the cracks seem to be getting more visible in the friendship between the yellow and the saffron party.

The audience which Jagan got from Central ministers has surely not been to the liking of the TDP. Deputy Chief Minister KE Krishnamurthy and Agriculture Minister Prathipati Pulla Rao openly expressed their displeasure over the way Jagan was allowed to meet the top ministers to "tarnish the image of Naidu." The TDP leaders argue that the necessity to see that the alliance continues was more for theBJP.

The BJP should realise that notwithstanding the latest survey it got done about popularity of the government, no new party was willing to join the NDA bandawagon. Secondly, the BJP had suffered set back in some of the recently held elections including Bihar and if it fails to retain its vote percentage and perform well in the upcoming UP Assembly elections then it would be like waving a red flag for BJP.

He also asserted that his party will not make Common Civil Code and slogan of ‘Bharat Mata ki Jai’ as election issues. “BJP will contest the election on the issue of development, failures of the Samajwadi Party government and law and order,” he said. If the BJP fails to achieve its goal to form the next government in UP then the political realignment would pick up greater momentum, TDP leaders claim.

The slow and steady way TDP ministers and MLAs have been raising their voice against the BJP is to send a clear message that their support cannot be taken for granted. In a strategic move, even Chandrababu Naidu has started raising his voice and is being more open in attacking the Centre for not extending a helping hand to the residuary state.

The sparks that flew between the Union Minister M Venkaiah Naidu and AP Chief Minister at a function recently is a clear indication that all is not well between the two allies. The TDP also wants to build up a momentum from now till the Mahanadu which would be held towards the end of May saying that the Centre was not lending a helping hand though the state is passing through severe financial crisis. Naidu would like to test the waters before opening up his mind on whether or not to continue with the alliance.

That is why he has left the task of criticising the Central government to some ministers and MLAs like Prathipati Pulla Rao, MLC Budda Venkanna and MLA Jaleel Khan. “We need financial help from the Centre to construct new capital city and finish other projects. But the BJP is not coming to the rescue of the state.

Special Status is our right and if need be we will not hesitate to come out of NDA," is the campaign that has been launched by these leaders. There is no doubt that the boat is rocking but it remains to be seen how Modi and the two Naidu’s Venkaiah and Chandrababu Naidu would handle the situation.