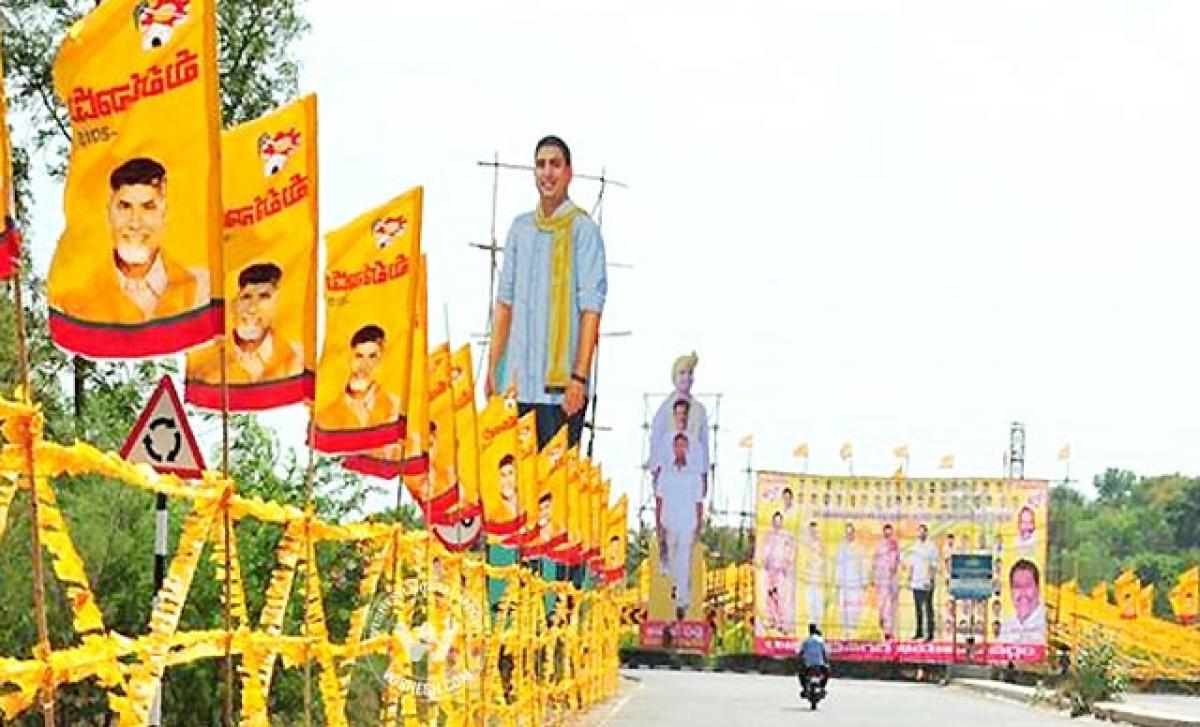 Telugu Desam party’s biennial conclave scheduled on May 27, 28 and 29 at Tirupati this year is going to be crucial for the party. It had never faced...

The Mahanadu which used to be a time for celebration for the rank and file and enjoy best of the cuisines, cultural programmes and go back with a calendar of events, this time will be a brain storming session. TDP is facing major challenges both as a ruling party in Andhra Pradesh and opposition party in Telangana.

The Mahanadu also assumes importance as the conclave is being held just couple days ahead of June 2 which the government proposes to observe as Rededication Day. Apart from coming up with clear action plan for better coordination between the government and the party.

Unlike in the past where it used to review its performance of the year that had gone by and come up with a calendar of activities, this time it has put tremendous responsibility on the party president N Chandrababu Naidu to give an entirely new direction to rank and file The ‘Dasa Disa’ of the party would depend on the outcome of the Mahanadu.

It will have to come up with two road maps. One to overcome the political problems within Andhra Pradesh, ensure that the infighting that has been witnessed in the last few days between the groups led by the TDP leaders who have been with the party for long and those who are lateral entries particularly from the YSRCP was put to an end and also see that there was better coordination between the party and the government.

The Mahanadu will also be laying emphasis on the promises made by the Centre, the quagmire faced by the government on issues like special status which has the potential to erode the party’s image. The party has to work out effective counter to deflect the attack by the Congress and YSRCP who have been alleging that the TDP had failed to put pressure on the Centre and it had in fact allowed it to avoid giving special status to the state.

Both the opposition parties are trying their best to use this as a stepping stone to revive their political fortunes. The party’s top think tank is clear in its mind that unless it can turn the tables on the opposition on various issues that are being raised by them and ensure that the rank and file stays close to the people, it would be an uphill task to win the next elections.

Another major problem for the party is to work out a road map to resurrect the party in Telangana where it is totally decimated and is facing a leadership crisis. It has been losing all the elections and there is no sign of gaining strength in the state.

In the backdrop of this situation, the top leadership of the party has been asked to prepare draft resolutions addressing all these problems. In all there are going to be 24 resolutions. About 15,000 to 20,000 members are expected to attend the conclave. Of this about 5,000 would be from Telangana state.

The think tank of the TDP is contemplating to come up with three types of political resolutions this time. One resolution will deal with national issues including the role of alliance partners in a coalition and two different political resolutions one for Andhra Pradesh and the other will be Telangana specific.

There is every possibility that the TDP may even resolve not to be a part of the government at the Centre in the future. TDP certainly would like to maintain its own political strategy at the national level. While it certainly is upset over the manner in which the Centre had failed to hold the hand of residuary state, it is not in a position to come out openly on such issues as the state is still struggling with several problems and it is not in a position to dictate terms to the Centre.

The BJP government which has ditched the state in regard to special status is also now unlikely to fulfill the promise of special railway zone though it is part of the AP State Reorganisation Act. The state leadership of BJP is causing embarrassment to the TDP day in and day out and is providing a stick to the opposition to beat the government.

The key elements of the political resolution at the national level would be expansion of the party base in neighbouring states like Karnataka and Tamil Nadu. It may also launch a blitzkrieg on the “successful implementation of welfare programmes, the measures the party and government had taken to put the residuary state back on the map of happening states.”

As far as Telangana is concerned, it will focus all its attention on rebuilding the party from scratch. It will reconstitute the various committees and will come up with a clear action plan to reactivate all its wings. Taking all these issues into consideration, Naidu chose Tirupati as the venue. Naidu holds Tirupati close to his heart and attaches great sentimental value to this place. “Lord Venkateswara will show a way out”, the party leadership appears to feel.

This is the third time that TDP is organising its mega event in Tirupati. The first time it was held in 2003, when Chandrababu Naidu was the chief minister for the combined state at Urban Haat (Silparamam) on the outskirts of the city. The second time, it was organised at Nehru Municipal School grounds, where the present Mahanadu is also scheduled to be held, when TDP was in the opposition in 2007.