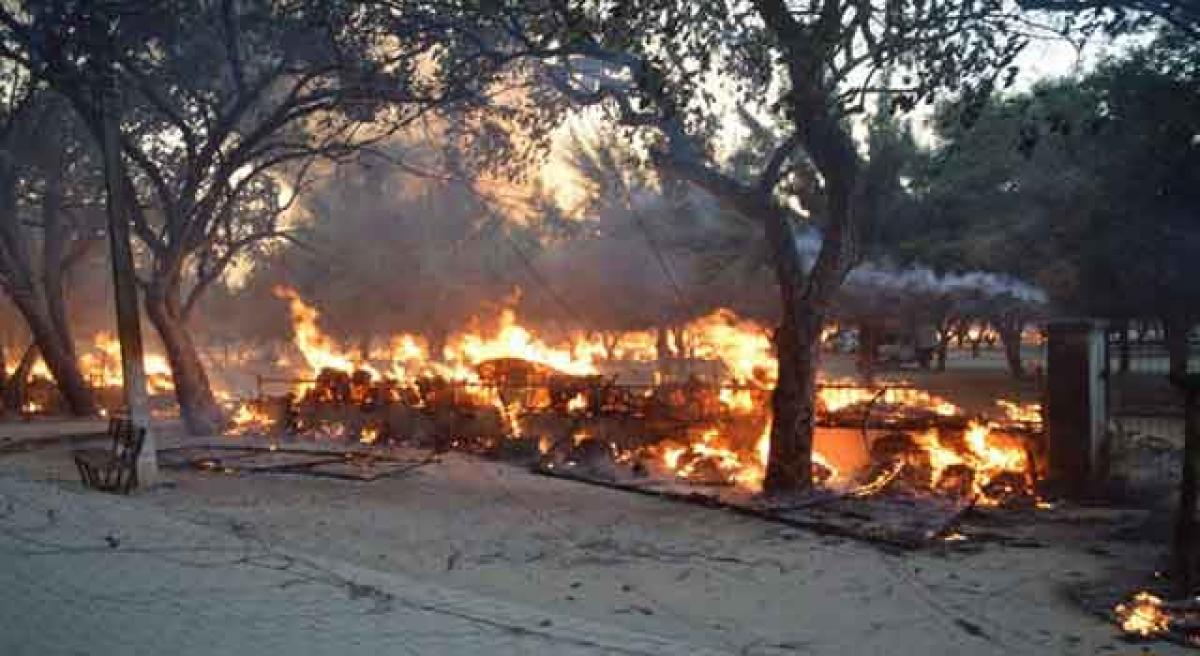 The violence in Mathura in which a score and more persons perished in clashes with police highlights a deep-rooted malice that has afflicted our...

The violence in Mathura in which a score and more persons perished in clashes with police highlights a deep-rooted malice that has afflicted our society. The relatively unknown Azad Bharat Vidhik Vaicharik Kranti Satyagrahi's rioting when the police asked them to vacate the occupied land of Jawahar Bagh in Mathura claimed the lives of at least two police officers, including the Superintendent of Police (SP) of Mathura city and a Station House Officer (SHO).

The violence erupted when the police were trying to evict the illegal occupants of Jawahar Bagh in the city on the orders of the Allahabad High Court. The activists of the organisation belonged to an outfit that claims allegiance to freedom fighter Subhash Chandra Bose.

Azad Bharat Vidhik Vaicharik Kranti Satyagrahi and Swadheen Bharat Subhash Sena are the two groups that have been protesting there for a very long time in the region demanding that all the documents related to freedom fighter Netaji Subhas Chandra Bose be made public.

What kind of Godmen are these and their followers? There is so much in common to these. Be it Asaram Bapu, Nityananda or the two mentioned above and all those whose Ashrams dot the highways in the country. Murder, sleaze, sexual exploitation and blackmail have become rampant in these if one goes by the allegations leveled and cases filed. Young girls drafted into the service of the Gurus never make it back to normal life. Indeed, spiritualism is a real good business in India

"These activists were followers of Baba Jai Gurudeo and have named their outfit as ‘Swadheen Bharat Vidhik Satyagrahi’. They have occupied hundreds of acres of land at Jawahar Bagh on the pretext of holding a ‘dharna’ since more than two years. Even after several notices were served to them, they were not ready to leave the premises,” Rajesh Kumar, District Magistrate, Mathura, was quoted as saying.

The violence in Mathura is allegedly linked to the dispute between supporters of a so-called spiritual guru Jai Gurudev whose empire is estimated to be worth over Rs 12,000 crore. Jai Gurudev's massive and opulent ashrams are situated on the Mathura-Delhi highway and in Etawah in Uttar Pradesh. His empire allegedly includes land worth Rs 4,000 crore, a massive fleet of cars including several Mercedes and Plymouths worth over Rs 150 crore, and more than Rs 100 crore in banks deposits, several newspapers reported.

Sources say the daily offerings made by his supporters at the ashrams are around Rs 10-12 lakh. Gurudev’s original name was Tulsidas Maharaj and he reportedly died in 2012. Over two years ago, Gurudev’s supporters occupied hundreds of acres of land of Jawahar Bagh in Mathura on the pretext of a dharna. Obviously, the effort was to take control of the land.

Around 3,000 encroachers pelted stones and later opened fire at the police team. They also allegedly used grenades and automatic weapons to attack the police force. Police have recovered a huge cache of arms from the area. The police action came following an order by the Allahabad High Court to clear the area.

Here is the twist to the story.
Ram Vriksha Yadav, the alleged leader of the outfit who has been absconding since his supporters clashed with the police on June 2, was a disciple of Mathura-based Baba Jai Gurudev. Media reports suggest that late Prime Minister Indira Gandhi, Samajwadi Party chief Mulayam Singh Yadav, former Chief Minister Narayan Dutt Tiwari and Rajnath Singh, former Governor Romesh Bhandari and UP PWD Minister Shivpal Yadav were among Gurudev's disciples.

"To me he was like God. Whatever I am today it is only due to blessings of Baba Jai Gurudev," said Shivpal Singh as saying when the spiritual leader passed away in 2012. Mathura administration says when the members of the current sect occupied the park, about 2,400 trees had been cut to facilitate their stay. How was this allowed? They continued to stay there illegally for two years, though they had permission to just hold a two-day protest. Who facilitated such a long stay?

The Allahabad High Court on May 20, 2015 directed the Principal Secretary (Home), District Magistrate of Mathura and Senior Superintendent of Police to take "all necessary steps and precautions" to ensure that a public park is "not allowed to be encroached upon in this manner."

In April 2016, a 48-hour ultimatum was issued by the district administration asking the encroachers to vacate the land. But, the impasse continued till the police force moved in June 2 to remove the encroachers. Why did the local administration and police take a year to execute the court direction is not a mystery. The group's demands were absurd.

Apart from pricing petrol and diesel at Rs 1 per litre, they want golden coins brought into circulation like in ancient and medieval periods, that the present currency notes be scrapped and the rule book of Indian National Army (Azad Hind Fauz) be made the new Constitution, banning of vegetarian food and stringent punishments to those who eat non-vegetarian and handing over the park for their ashram.

As per an estimate, Gurudev had land worth Rs 4,000 crore. There's a school and a petrol pump in Mathura in the name of the Jai Gurudev Trust. The Baba's fleet of luxury cars included Plymouths, Mercedes Benz, Skodas and BMWs. Doesn’t all this remind us of Godman Rampal's episode (of Hissar in Haryana)? A similar violence broke out when policemen in riot gear used teargas shells, batons and bulldozers to enter the self-styled Godman's sprawling Ashram as thousands of his supporters fought to prevent his arrest for a murder.

Cops in riot gear could not easily handle the situation here (in 2014) as the followers of Rampal had all kinds of weapons in their possession and were firing from rooftops. Policemen in riot gear used teargas shells, batons and bulldozers to try and enter self-styled Godman Rampal's sprawling ashram, as thousands of his supporters fought to prevent his arrest. In Rampal's case, it was only after the court's intervention that the police launched their action.

The spiritual leader has managed to avoid arrest for nearly two weeks despite three warrants, as a massive contingent of men, women and children have been sitting outside his ashram forming a human cordon. Rampal had skipped court 43 times in four years. Indeed spiritualism is a real good business. More so when one has the blessings of powerful politicians and governments, directly or discreet.

Let us pause for a moment here.
What kind of Godmen are these and their followers? There is so much in common to these. Be it Asaram Bapu, Nityananda or the two mentioned above and all those whose Ashrams dot the highways in the country. The riches of these Ashrams' are so vast and huge that the Gurus and their close confidants have virtually embarked on armed training for their cadres to control the devotees. Murder, sleaze, sexual exploitation and blackmail have become rampant in these if one goes by the allegations leveled and cases filed.

The long list of politicians and bureaucrats and powerful businessmen who visit these ashrams only add to the glitz and glamour of these Gurus and keeps them out of public glare and the scrutiny of law. There is yet another dimension to these Ashrams and gurus. Disciples find it difficult to get out of the clutches of the Ashrams. It is a common knowledge that young girls drafted into the service of the Gurus never make it back to normal life. When parents complain, police usually refuse to cooperate.

The mix of politics and spiritualism is indeed a powerful potion in this country!