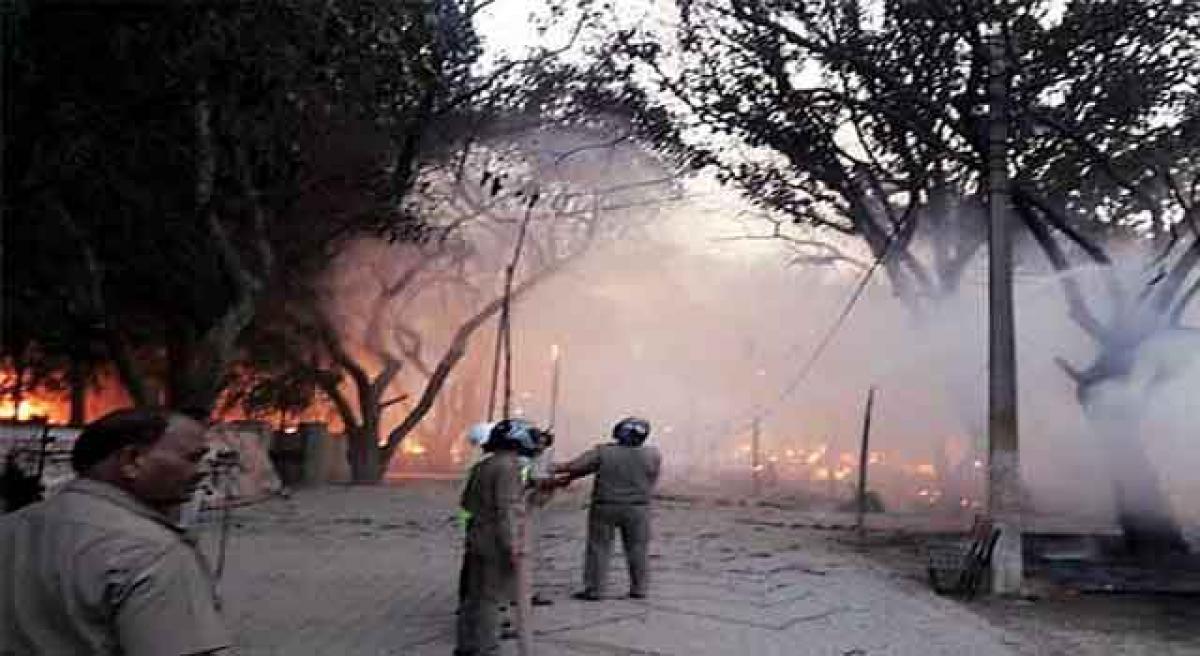 Having expressed my distress in this space at the way Uttar Pradesh, the country’s largest and politically powerful state, is being governed – and...

Having expressed my distress in this space at the way Uttar Pradesh, the country’s largest and politically powerful state, is being governed – and eyed by those who are aspiring to – there is an acute sense of déjà vu at the massacre in Mathura in which 24 people, including two senior police officers died. The line at the top and the bottom is that the State is “gearing up” for next year’s elections. So, expect the worst.

The irony is not lost on anyone. First, it is ruled by a family professing socialism, but the opposition Bharatiya Janata Party and its lawmakers and affiliate bodies are calling the shots. The Akhilesh Yadav Government is too busy issuing full-page advertisements singing its own praise.

Just about every party has recorded its views on the Mathura violence with each accusing the others of “playing politics over dead bodies.” This is by no means new, although the scale of violence and frequency is greater. What use is democracy and its functioning if elections are going to generate this kind of mayhem?

Delhi’s Sunday newspapers that carried gory details from Mathura also carried four pages of colourful ads. Each time a man-made catastrophe occurs, the State government shouts a novel defence: “intelligence failure.” It was the same in the report on the Muzaffarnagar violence that killed over 80. Politicians and officials are specifically absolved of any blame and responsibility.

The axe fell only on a few police officers. The case is closed, as it were. It was the same on the Dadri killing of a man for alleged beef-eating. It is a convenient way for political class to extricate itself and blame the police and bureaucracy.

Swadheen Bharat Subhas Sena (SBSS) has been in Mathura for over two years. The authorities cordoned the place and allegedly, choked the supply lines. Despite all this, the UP Police claims to have been taken by surprise, admit “intelligence failure.” And now they discover money, limousines and arms cache at the site. The consequence of this ‘failure’ has been the police being fired upon from tree tops and two senior police officers being killed.

The protestors – some 3,000 lathi-wielding men and women – belong to this organisation that clams to owe allegiance to Netaji Subhas Bose. The group’s founder Ram Vriksha Yadav, since found dead, had claimed in the Supreme Court that he would produce Netaji in front of people, and if he could not do so he should be hanged."

It is not surprising that the outfit spread the message that Netaji is very much alive and would give a ‘darshan’ after two months. And the gullible were geared up and armed to receive the man who would be 119 years old, if alive.

Netaji’s name is thoroughly misused, but those who have been milking his name and fame and are otherwise ultra-sensitive have yet to effectively disown the outfit and condemn the killings of 24 persons.

Jawahar Bagh is ostensibly named after the first Prime Minister. See another irony. Nehru was supposed to have hounded Bose to block any political challenge. This hounding, sought to be established on the basis of official leaks of papers including “intelligence reports,” has become part of the current political lore. Reams have been written to ‘discover’ Netaji, 61 years after he was supposed to have died.

Hema Malini, the BJP lawmaker from Mathura, protested against the violence and posted it on the social media. Her party criricised the Akhilesh Government for letting the violence occur. But it forced the actress-turned politician to delete the posts – why? Is there a nexus with the Sena?

The party leaders and its affiliates have been saying and doing provocative things. But BJP chief Amit Shah dismissed allegations against the affiliates like Bajrang Dal and Vishwa Hindu Parishad, saying they are “not BJP.” The public should only address things to the Modi Government. If that is so, what about some State Governors from the BJP stable and Union Ministers who have been talking in public or resorting to social media to air controversial views?

Just about every party has recorded its views on the Mathura violence with each accusing the others of “playing politics over dead bodies.” This is by no means new, although the scale of violence and frequency is greater. What use is democracy and its functioning if elections are going to generate this kind of mayhem?

Among the many ‘freedoms’ (mukti) that Prime Minister Narendra Modi promised when he took office two years ago, one is “bhay-mukta Bharat” (freedom from fear). It is this that the common man is yearning for, no matter which party, which government and which leader brings it. Modi does have this promise to keep, whether or not he follows the lines of American poet Robert Frost, the way Nehru did.

The Reserve Bank Governor’s post and the person holding it have rarely been subjects of political slugfest before. But an animated debate affecting even the stock markets is unprecedented in the case of the current Governor, Dr Raghuram Govind Rajan.

One of the very few key officers who was appointed by the UPA government, but was retained by the NDA dispensation, Rajan is brilliant. One may or may not agree with his ideas drawn from the Chicago School, and decisions that keep the economy going – and doing well on many counts – the man must be given credit. Even the global investor community's trust in Rajan comes from his deep understanding of world economy.

He has in the past served as the youngest Chief Economist of the International Monetary Fund (IMF) and had cautioned the world against the risks of credit-default swaps and mortgage-backed securities, which led to the global recession in 2008. In the last three years, Rajan has worked ardently to contain the volatility of the rupee, which has been see-sawing between Rs 58.27 in 2014 to Rs 67.29 as of now.

He is popular without being a populist. Though he hasn't obliged India Inc with rate cuts as per their wish list, prominent business tycoons like Adi Godrej, Rahul Bajaj, Harsh Mariwala, among others, are firmly backing Rajan's candidature for a second term.
He is reportedly in disagreement with prescriptions that Finance Minister Arun Jaitley has to improve the economy, but it is Jaitley who has sought to scotch the criticism, if not exactly defend Rajan, from the brutal attack from a BJP lawmaker, Dr Subramanian Swamy, that not only questions Rajan’s competence, but also flays Rajan for lacking ‘Indian-ness’ and a mind attuned to take decisions in favour of the country. On a serious note, he has accused Rajan of 'leaking sensitive information' and demanded his sack.
But then, Swamy is also a known critic of Jaitley. So, is there any truth in what the grape wine has to say that Swamy in attacking fellow-Tamilian Rajan is actually targeting Jaitley?

UPA government’s Finance Minister P Chidambaram has wondered whether the Modi government “deserves” an RBI Governor like Rajan, calling him “one of the most outstanding economists in the world.” Chidambaram is pitching for the Congress that has claimed that the tirade against Rajan has the full and complete blessings of the government and the ruling BJP.

Rajan himself has reportedly written to the government to end ‘unnecessary’ speculation over what is essentially an institution and need not be personality-driven. There is conflicting speculation on whether the PM wants to retain Rajan. Swamy’s attacks have served to keep the pot boiling to the brim. Rajan’s term ends on September 3. With three months to go, it will be a pity if this debate is kept up without a decision.