Offence is the best form of defence… 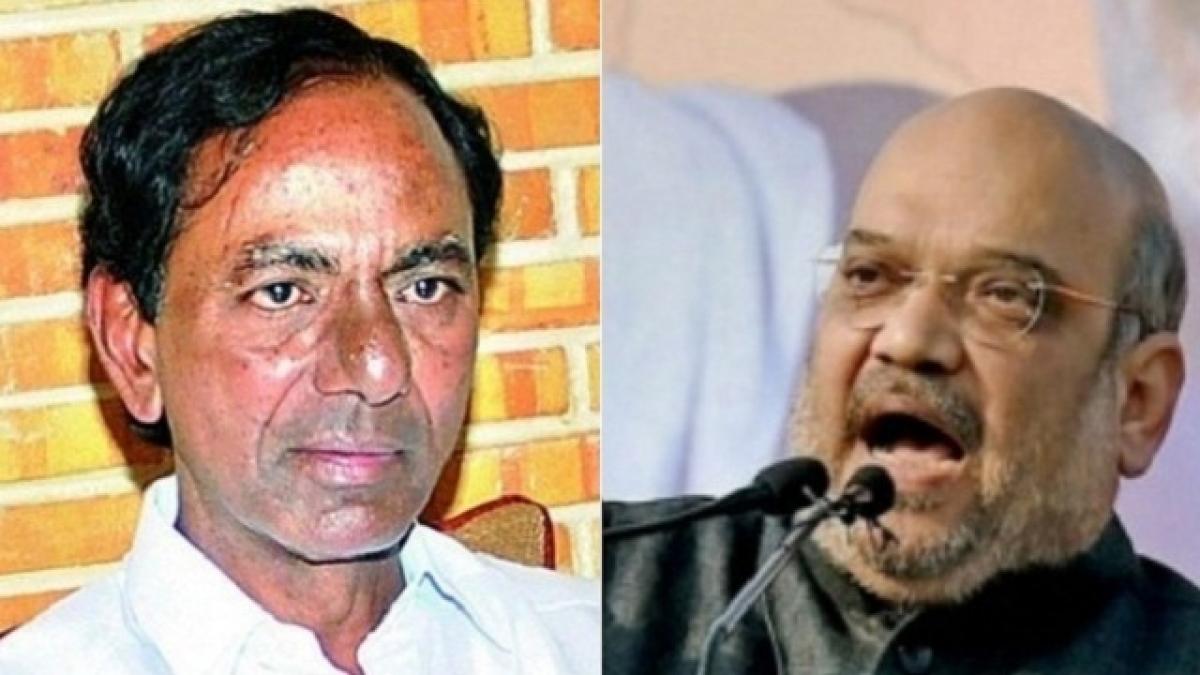 The common refrain that one hears across the spectrum is ‘Dilli abhi door hai”. However, this time around, all political roads from the national...

The common refrain that one hears across the spectrum is ‘Dilli abhi door hai”. However, this time around, all political roads from the national capital seem to be leading to a common destination-Telangana State. How else can one explain the fact the poster boys of Bharatiya Janata Party (BJP) and Congress have set their eyes on the country’s newest State.

Having made inroads in many northern States that somehow were reluctant to bring the party to power for several years now, Amit Shah undertook a ‘fruitful’ visit here, which, ostensibly was to invigorate the party rank and file that anyway has been reduced to pedestrian levels.

Close on the heels of Shah visit, Congress prince Rahul Gandhi, would be arriving on June 1 to give impetus to the 100-year-old party that seems to have been caught in a perennial Catch-22 situation in the two Telugu-speaking States. In Andhra Pradesh, it was virtually non-existent like in Tamil Nadu.

If Shah was not enough of a major face for the saffron party, another crowd puller is to step up the party prospects. Uttar Pradesh Chief Minister, Aditynath Yogi will make a tour of Telangana State and hold public meetings.

Apparently, both the national parties are racing against each other to fill the political vacuum that exists in the State. This has created such a political stir that the ruling TRS has also gone into an overdrive.

Prior to Shah’s tour, local leaders exuded confidence that he would bolster the State unit, particularly the cadre. In a dramatic punch, Shah created a flutter while charging that the TRS-led State Government had done precious little with the Rs one lakh crore earmarked for Central government schemes.

It has its effect in that Chief Minister K Chandrasekhar Rao came up with a strong rebuttal and going to the extent of calling Shah’s claims as blatant lies besides seeking a public apology from him.

On the other hand, it infused a new awakening that gets evidenced by the joint press conference that was addressed jointly by BJP legislators, who stated that they would expose the government if it convenes a session of the Assembly or fixes venue and time for an open debate.

KCR had to react and react he did on a boisterous note perhaps fearing that Shah’s insinuations could malign the well-cultivated image of TRS. Making utmost use of his oratory skills, and armed with a point by point rebuttal, the agitated KCR scoffed at Shah and went to the extent of averring that BJP would a draw a blank in Telangana State if elections were held as on that day.

Replicating his north India success would be impossible as south India was a different proposition altogether, Rao pointed out. BJP sources said that Shah watched the explosive media conference of KCR in the company of Dr Laxman and Muralidhar Rao. The Chief Minister interspersing Hindi and English was intentional and meant for the BJP President.

Meanwhile, KCR added a new dimension while spelling out a new finding whereby the only opposition that could register its presence in the Assembly after next elections would be the Congress party with just two seats. His claim that the Telangana State has given Rs 50,013 crore to Centre by way of various taxes in 2016-17 and the Centre in turn gave Rs24, 561 crore the same year could be the next point of debate between the two parties.

It now remains to be seen whether the State BJP would retaliate or whether it would reach out to the interiors as directed by Amit Shah or be back to sulking. In the backdrop of this situation, all eyes are now on the visit of AICC Vice-President Rahul Gandhi.

This assumes greater importance in the backdrop of the survey findings. Will Rahul be able to stir the enthusiasm in the rank and file and unite the party leaders who have been pulling in different directions in the past three years? The answers are elusive and so are any conclusive steps in that direction