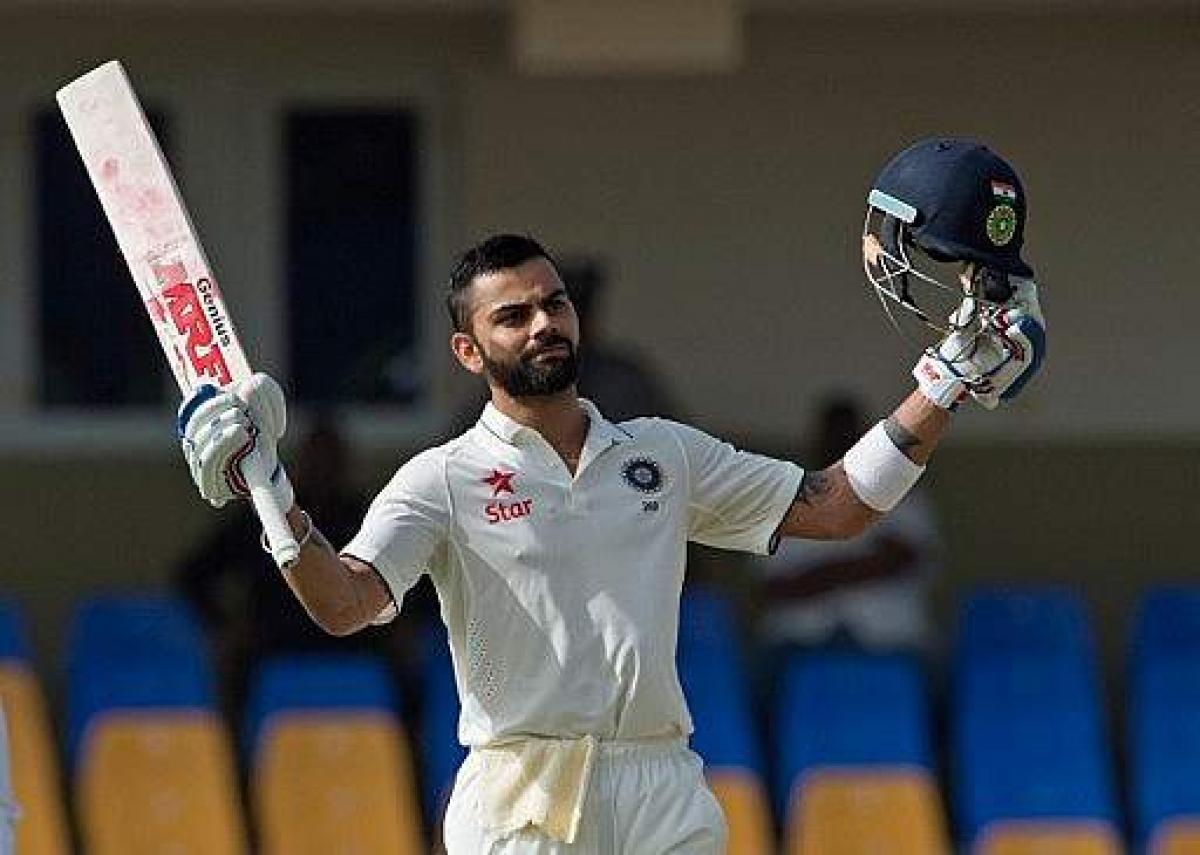 Virat Kohli\'s first double-century in any form of first-class cricket and Ravichandran Ashwin\'s third Test century against the West Indies anchored India\'s formidable first innings total of 566 for eight declared on the second day of the first Test on Friday.

​North Sound: Virat Kohli's first double-century in any form of first-class cricket and Ravichandran Ashwin's third Test century against the West Indies anchored India's formidable first innings total of 566 for eight declared on the second day of the first Test on Friday.

Left to negotiate a testing hour before the close of play, the West Indies lost Rajendra Chandrika to a catch at the wicket off Mohammed Shami, leaving opening partner Kraigg Brathwaite and nightwatchman Devendra Bishoo to resume on the third morning at 31 for one.

On another day of generally fruitless toil for the West Indies, Kohli extended his batting masterclass from the first day for another two hours, adding another 57 runs to reach exactly 200 just before the lunch interval.

He became the first Indian captain to score a Test double-century away from home.

Any expectation of more of the virtuoso performance was ended off the second delivery upon the resumption when he played on to the persevering and previously unlucky Shannon Gabriel.

Kohli's innings spanned just over six hours and was embellished by 24 fours off 283 deliveries.

Dropped on 43 by new wicketkeeper Shane Dowrich off Gabriel in the morning session, Ashwin played the supporting role to his captain in a 168-run fifth-wicket stand that drained the enthusiasm from the home side before lunch.

However Kohli's surprise demise put the focus squarely on the all-rounder and he made the most of the promotion to number six in the batting order for the first time in his Test career, reaching three figures just before tea with a boundary off the tiring leg-spinner Bishoo.

"It was great to get pushed up the order," said Ashwin at the end of the day in reflecting on his innings.

"I don't get surprised with what I do because I really enjoy my batting, but I know I still have a lot of work to do to really establish myself in the top six."

He got good support from wicketkeeper-batsman Wriddhiman Saha, who contributed 40 to a 71-run stand for the sixth wicket before he became Dowrich's first wicketkeeping victim in Test cricket, being stumped off the bowling of part-time off-spinner Brathwaite.

It was the first of three wickets for Brathwaite, who ended Ashwin's vigil at 113 and then accounted for Amit Mishra for an attacking 53 which prompted the anticipated declaration.

"It's going to take a while for everything to click in the bowling department because this is a very young group," said West Indies bowling coach Roddy Estwick.

"Some of our guys need to work on their pace but it will take some time to get it right."