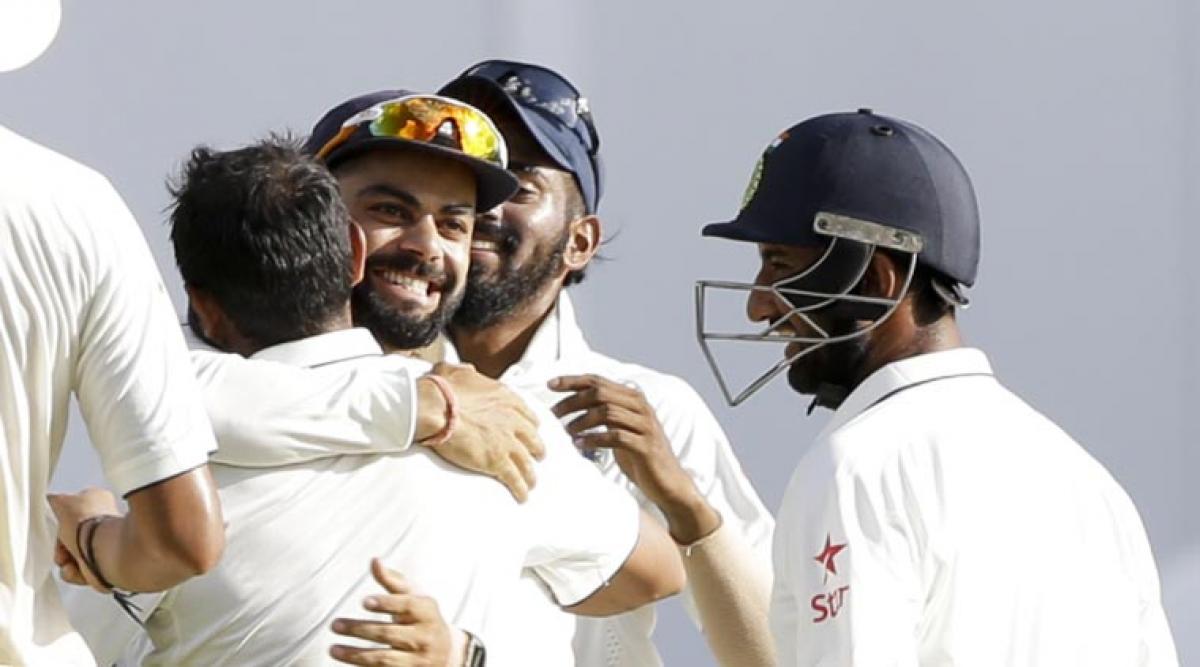 India took firm control of the second cricket Test match by bowling out the West Indies for 196 runs before reaching for 126 for one at the end of the first day here on Saturday.

​Kingston: India took firm control of the second cricket Test match by bowling out the West Indies for 196 runs before reaching for 126 for one at the end of the first day here on Saturday.

Off-spinner Ravichandran Ashwin picked up five wickets for 52 runs as India dismissed the West Indies in their first innings till tea.

And in reply, Lokesh Rahul, playing the match in place of injured Murali Vijay, remained not out on 75, while Cheteshwar Pujara was batting on 18 at stumps. India are just 70 runs behind the West Indies' first innings score.

India, having won the first match convincingly, dominated the proceedings very early. Indian seamers utilised the conditions to perfection at the Sabina Park as Ishant Sharma and Mohammed Shami reduced the hosts to 7/3 before Ashwin struck just at the stroke of lunch to put the West Indies on the backfoot.

On what was touted as a pacy green track before the start of the match, Sharma extracted good bounce to dismiss opener Kraigg Brathwaite (1) and then Darren Bravo for a duck off the very next delivery.

Bravo's poor run with the bat continued as he failed to read the Delhi pacer's length ball outside off to be caught brilliantly by Indian skipper Virat Kohli.

Shami then joined the party by packing the other opener Rajendra Chandrika (5) with a slightly back of length delivery, which induced the right-hander to go for a flash but instead got a thick edge to be caught at slips by Rahul.

With the hosts reeling at 7/3, veteran Samuels and Blackwood led the fightback with an 81-run stand for the fourth wicket.

Blackwood was unfazed with the situation his team was in and started playing his natural game from the start. His run-a-ball 62 included seven boundaries and four sixes before one from Ashwin turned sharply to send him back just before the lunch break.

After the 40-minute lunch break, it was all about the show from Ashwin, who had picked seven wickets in the first Test. The 29-year-old's 18th five-wicket haul included the dismissals of Jermaine Blackwood (62), Marlon Samuels (37), Shane Dowrich (5), Jason Holder (13) and Devendra Bishoo (12).

Samuels, who along with Roston Chase were unbeaten at lunch, looked aggressive after the lunch and in the 29th over, he struck three consecutive fours off short deliveries from pacer Ishant Sharma. In the following over, he spanked Ashwin for a six over mid-on by dancing down the track in the first ball.

However, Ashwin got him in the second delivery as he tossed the ball up and Samuels reacted slightly slowly before the ball took the inside edge and was caught by Lokesh Rahul at short leg.

With the loss of the veteran right-hander with the total at 115/5, Ashwin made further inroads into the West Indian lower-order batting by dismissing Dowrich as the right-handed batsman edged to wicket-keeper Wriddhiman Saha.

Shami picked up his second wicket when Chase (10) drove and edged it to Shikhar Dhawan at slip off a perfect length ball.

Then, Bishoo attempted a sweep but he ended up top-edging an Ashwin delivery as the ball fell into the hands of Dhawan at short fine leg. Holder inside-edged another Ashwin pitched up delivery to Rahul at short leg.

Miguel Cummins (24 not out) delayed the inevitable as Shannon Gabriel (15) was the last batsman to be dismissed - by leg-spinner Amit Mishra.

Indian opening batsmen -- Rahul and Shikhar Dhawan (25) -- complemented the bowlers by giving the side a tremendous start. Especially, Rahul looked in ominous touch as he used it feet perfectly to hit as many as 10 fours.

He also got a reprieve when he was on 46 as Bravo spilled a catch at short midwicket in the bowling of off-spinner Chase.

The opening stand had reached 87 when a poor drive away from the body from Dhawan went staright to Bravo at short cover off the bowling of Chase.

After the wicket, Rahul was joined by Pujara in the middle and the duo remained unbeaten to make it a successful day for India.