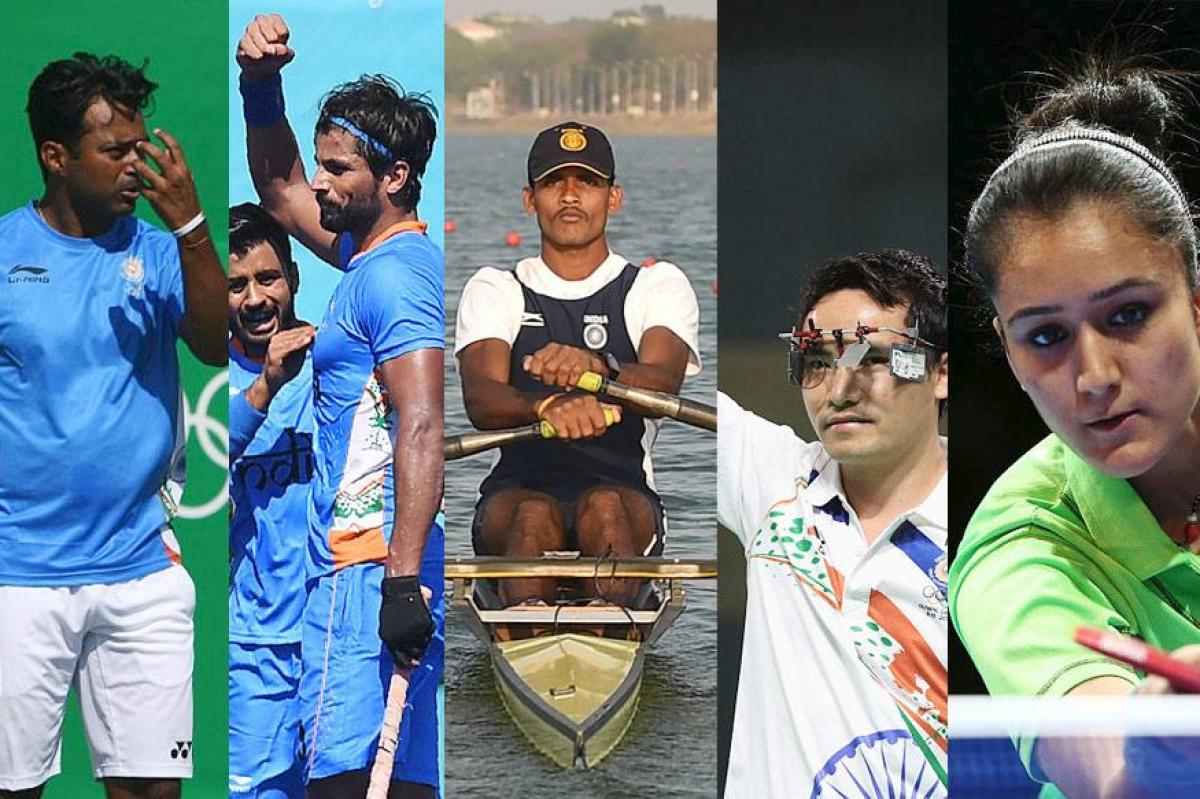 India endured a largely disappointing day at the ongoing Rio Olympics with the men\'s hockey team and rower Dattu Baban Bhokanal proving to be the only bright sparks.

​Rio de Janeiro: India endured a largely disappointing day at the ongoing Rio Olympics with the men's hockey team and rower Dattu Baban Bhokanal proving to be the only bright sparks.

The Indian men's hockey team began their campaign with a morale boosting 3-2 win against Ireland in their opening pool encounter. Bhokanal meanwhile, produced a creditable performance to reach the quarter-finals of the men's single sculls event.

But the shooters, paddlers, and weightlifter Saikhom Mirabai Chanu (women's 48 kg) proved to be a disappointment.

The tennis court also did not yield any positive results as the men's doubles combination of Leander Paes and Bopanna and the women's doubles pair of Sania Mirza and Prarthana Thombare crashed out in the opening rounds of their respective categories.

In women's doubles, Sania and Prarthana went down fighting to Shuai Peng and Shuai Zhang of China in a see-saw first round encounter at the Olympic Tennis Centre.

Paes was not Bopanna's partner of choice and the duo clearly did not enjoy the best camaraderie in the run up to the Olympics. That clearly reflected in their on-court performance as the Indians went down 4-6, 6-7 (6) to 's Lukasz Kubot and Marcin Matkowski of Poland.

Paes-Bopanna surrendered the first set in 32 minutes at the Olympic Tennis Centre and the second set in 52 minutes.

It was Paes' record-setting seventh Olympic appearance, which ended on a disappointing note for the veteran star.

The Indian pair committed 18 unforced errors in comparison to 10 by their opponents in the first set. The second set was closely contested with both teams retaining their serves to stretch it to a tie-breaker.

But ultimately the Indian pair went down fighting 8-6 in the tie-breaker to bow out in 1 hour 24 minutes. They won only 59 of the total 132 points played in the match.

In hockey, the Indians notched up a victory over a spirited Ireland despite a shaky performance.

John Jermyn (45th) and Conor Harte (55th) reduced the margin for the Irishmen in the Pool B match.

India's next match is against two-time defending champions Germany on Monday.

Dattu Baban Bhokanal produced a pleasant surprise in the men's single sculls event as he reached the quarter-finals after finishing third in his heat.

In the first heat of the day, the 25-year-old from the Indian Army finished the 2000-meter race in seven minutes and 21.67 seconds at the Lagoa Stadium here.

The Maharashtra lad is the sole Indian to have qualified for the rowing events. He was in second place for the first 500 metres of the race, but started to lag behind once Juan Carlos of Mexico in the second lane picked up pace around the 700m mark.

At the shooting ranges, Apurvi Chandela and Ayonika Paul crashed out after losing in the quarter-finals of the women's 10 metre air rifle event.

Apurvi was placed in the 34th position with a combined score of 411.6 while Ayonika was 47th with 403.0 among 51 shooters at the Olympic Shooting Centre.

China's Du Li entered the quarter-finals, bagging the top spot with a score of 420.7, setting a new Olympic record at the event. Germany's Barbara Engleder took the second spot with 420.3 while Iran's Elaheh Ahmadi was third with 417.8.

Apart from the top three, a Russian, two Americans, a Croatian and another Chinese shooter completed the top eight line-up.

"I don't know what happened, my mind has totally gone blank," Apurvi told IANS after the event.

"Of course when I came in this morning, I expected to win. Who doesn't," a visibly crestfallen Chandela said before proceeding to see the finals of the competition with her physio Nikhil Ajit Latey, which was won by Virginia Thrasher of the US with a score of 208.

Apurvi had won the gold medal at the 2014 Commonwealth Games in Glasgow. Her other colleague Ayonika Paul had won the silver at the competition. Paul, who too watched the finals from the rear gallery, did not want to comment.

Later, medal hope Jitu Rai finished eighth in the men's 10 metre Air Pistol event. Jitu produced a string of poor shots for a total score of 78.7 and was the first to be eliminated from the eight-man final.

Playing in his maiden Olympics, Jitu showed signs of nerves right from the qualifying rounds and made it to the final by the skin of his teeth.

He continued his nervous performance in the final as well and lagged behind in the early stages and was unable to rise above the last place.

The Naib Subedar from the Indian Army slipped to the eighth and last spot right at the start with a total score of 28.9 points after the first three shots.

He ran into further trouble with a 9.7 in his next shot. The 28-year-old continued to struggle with his next couple of shots as the shooters at the top of the pack continued to churn out consistent above 10 attempts.

On the brink of elimination with an overall score of 68.6, Jitu managed a 10.1 but it was not enough to keep him in the competition.

World No.73 Sharath fought hard in all of the five games but the 36-year-old world No.90 of Romania was up to the challenge.

In weightlifting, Chanu produced a disappointing performance and was unable to make an impact in the women's 48kg category at the Riocentro Pavilion 2 arena.

Competing in Group A, Chanu lifted 82 kilograms in the snatch event, but could not complete any of her lifts in the clean and jerk.

Sopita Tanasan of Thailand won the gold with a total lift of 200 kilograms, Sri Wahyuni Agustiani of Indonesia clinched the silver with 192 kilograms while Japan's Hiromi Miyake (188 kilograms) took the bronze.