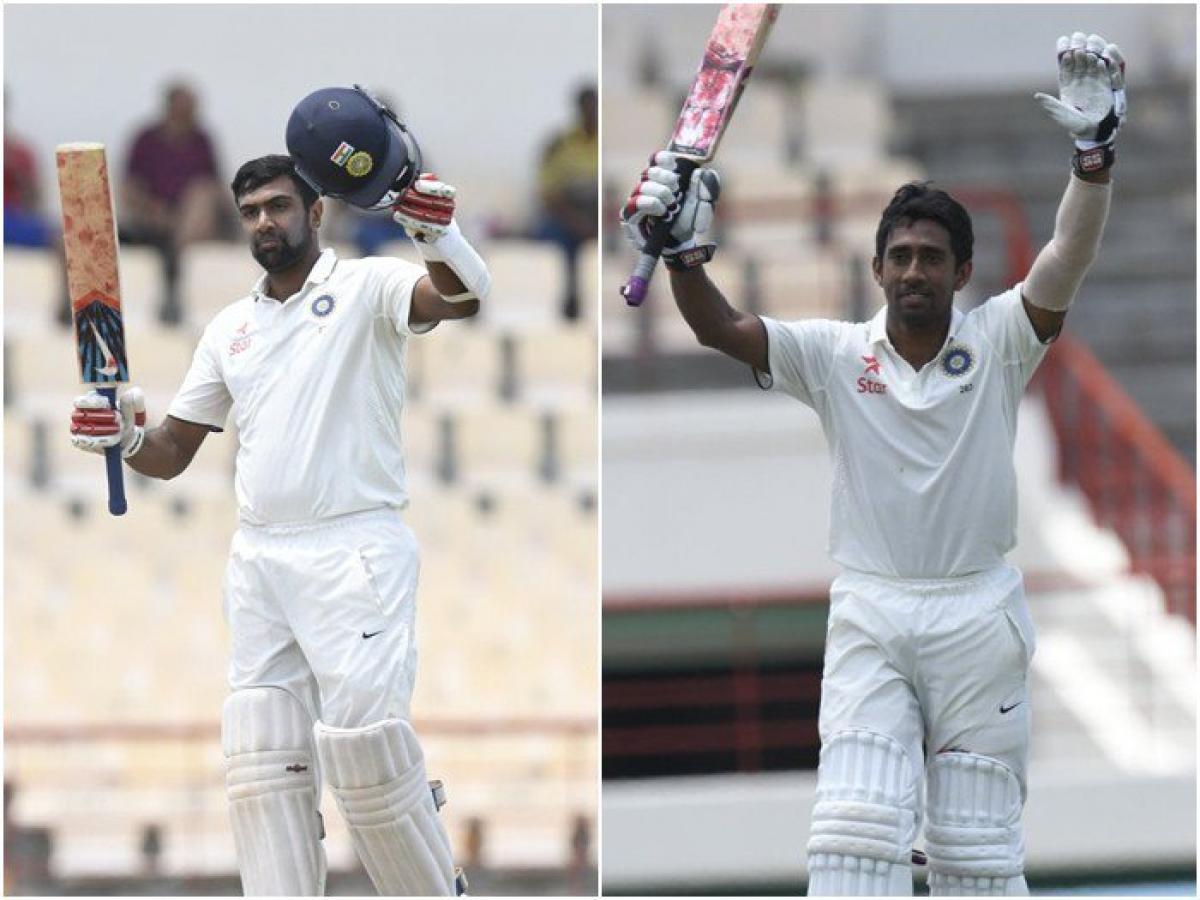 West Indies were making a solid reply at 107 for one at stumps after centuries by Ravichandran Ashwin and Wriddhiman Saha lifted India to a total of 353 on the second day of the third Test at the Darren Sammy National Stadium in St Lucia on Wednesday.

​Gros Islet (St. Lucia): West Indies were making a solid reply at 107 for one at stumps after centuries by Ravichandran Ashwin and Wriddhiman Saha lifted India to a total of 353 on the second day of the third Test at the Darren Sammy National Stadium in St Lucia on Wednesday.

Contrary to what had prevailed previously in the series, India's bowlers found the West Indies top order to be particularly obdurate in navigating through 47 overs for the loss of only Leon Johnson's wicket.

Playing his first Test for 19 months, the Guyanese left-hander survived a chance at slip off Mohammed Shami just before tea before being run out for 23 by Lokesh Rahul's direct throw to the bowler's end after an opening partnership of 59 with Kraigg Brathwaite.

Brathwaite (53 not out) and Darren Bravo (18 not out) will carry the battle for the West Indies into the third morning seeking to match the determination and discipline of Ashwin and Saha in their record 213-run sixth-wicket stand that spanned almost five hours.

West Indies seemed resigned to another day of generally fruitless toil as Ashwin and Saha, who came together just before tea on day one with India struggling at 126 for five, pushed their sixth-wicket stand beyond the 200-run mark after lunch, reaching hundreds along the way.

Reinforcing his affection for Caribbean bowling, Ashwin reached his fourth Test century and second in three matches in the series with a six off off-spinner Roston Chase. All four of his three-figure scores in the traditional format of the game have come against the West Indies.

Saha followed shortly after in getting to the landmark, his first in Test cricket, but fell shortly after for 104. Chasing a wide delivery from Alzarri Joseph, the wicketkeeper-batsman edged a catch to his West Indian counterpart Shane Dowrich to give the debutant fast bowler his third wicket of the innings.

His innings occupied just over five hours in which he faced 227 deliveries in an effort embellished with 13 fours. Saha's partnership with Ashwin was a new Indian record for the wicket in Tests against the West Indies, eclipsing the 170 posted by Sunil Gavaskar and Ravi Shastri in 1983 in Chennai.

In stark contrast to the lengthy defiance of Ashwin and Saha, the lower half of the Indian batting order folded meekly with the last four wickets falling for just one run, Miguel Cummins being the prime beneficiary as the fast-medium bowler claimed his first three wickets in Test cricket after going wicketless on debut in Jamaica a week earlier.

Ashwin was one of his victims, being ninth out when he fended a lifting delivery to Jermaine Blackwood at gully. His generally watchful innings of 118 spanned over six hours and included one six and just six fours over 297 deliveries.