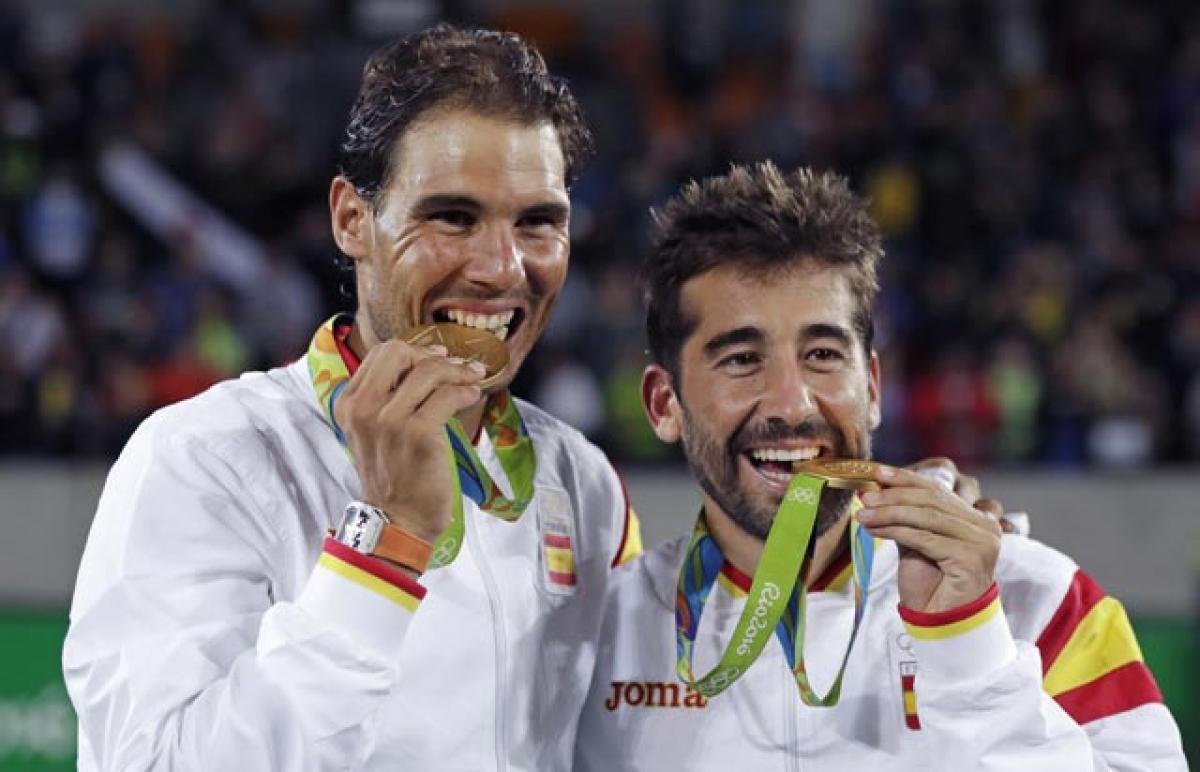 Nadal, the 2008 singles champion in Beijing, is just the fourth player to win gold in singles and doubles after Serena and Venus Williams and Chile's Nicolas Massu. "It was an amazing experience to win with my best friend," said Nadal after victory was secured courtesy of a wild Tecau smash, sparking an emotional celebration between the two Spaniards.

"We fought and gave everything. I didn't play for two and a half months, no practice, just work in gym. We had fun and fought hard." Earlier, the 30-year-old defeated Brazil's Thomaz Bellucci 2-6, 6-4, 6-2 in the singles quarter-finals. The 14-time major winner faces Juan Martin Del Potro of Argentina on Saturday for a place in the final.

Del Potro, the 2009 US Open champion who was pushed to the brink of retirement by years of wrist trouble, downed Spain's Roberto Bautista Agut 7-5, 7-6 (7/4). The Argentine, who knocked out world number one Novak Djokovic in the first round, wept in his courtside chair at the end of the quarter-final in which he fired 42 winners.

Defending champion Andy Murray will face Japan's Kei Nishikori in the other semi-final. In the women's singles, Monica Puig made Saturday's final where she will play Germany's Angelique Kerber for the chance to win Puerto Rico's first gold medal. "Being in the singles semi-finals is something that a few days ago I wouldn’t even imagine," said Nadal, who is playing in his first tournament since the French Open where he suffered an injury to his left wrist.

Del Potro has seen his ranking slip from four in the world to 141 after undergoing three surgeries and missing large parts of the last two seasons.
"Every time I play here, the crowd makes me cry," said the 2012 bronze medallist who once again enjoyed the support of a legion of boisterous fans wearing Argentina football shirts.

Monfils wastes match points Second seed Murray battled through a second successive three-setter to reach the semi-finals with a 6-0, 4-6, 7-6 (7/2) win over Steve Johnson of the United States. Murray finished with 31 winners but also 36 unforced errors. "I expected a tough match. The court is very lively, there's a lot of wind, so it makes it hard to play," said Murray.

He'll face Nishikori who saved three match points to defeat France's Gael Monfils 7-6 (7/4), 4-6, 7-6 (8/6). Monfils double-faulted on his last match point in the tie-breaker which he had led 6/3. "I had nothing to lose from 6-3 down and I knew that my concentration wasn’t there so I tried to play a little more aggressive," said the Japanese star.