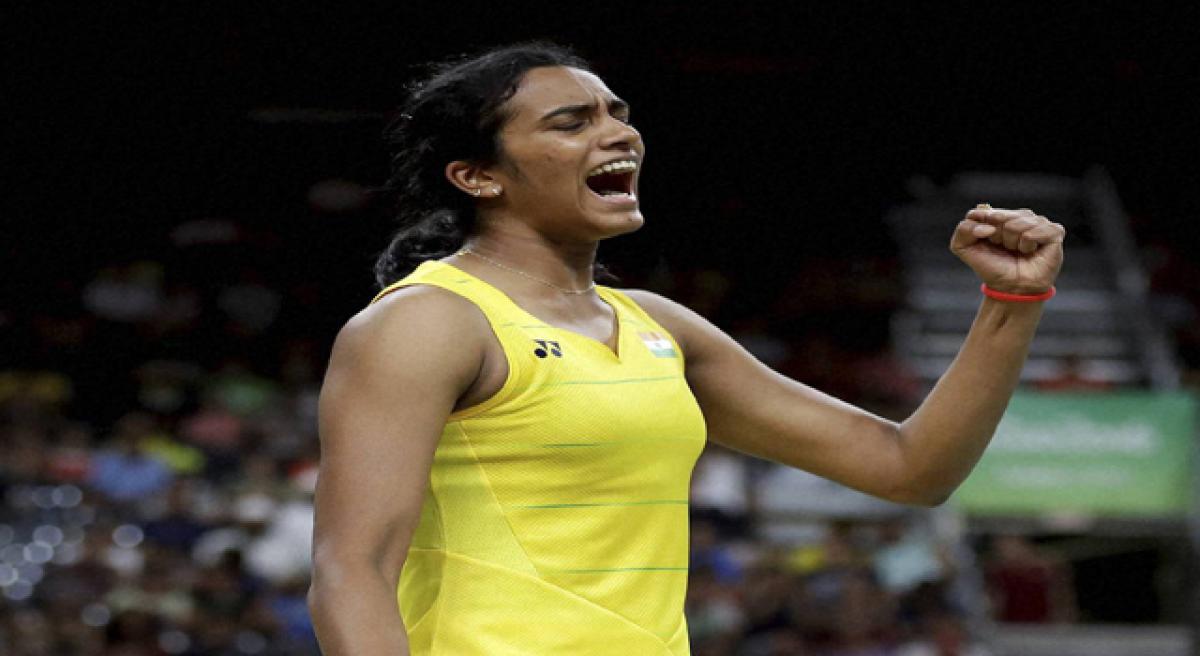 PV Sindhu scripted history by becoming the first Indian shuttler to reach the finals of the women\'s singles competition at the Rio Olympics as she stunned Japan\'s Nozomi Okuhara in straight games to assure India of at least a silver medal here on Thursday.

Rio de Janeiro: PV Sindhu scripted history by becoming the first Indian shuttler to reach the finals of the women's singles competition at the Rio Olympics as she stunned Japan's Nozomi Okuhara in straight games to assure India of at least a silver medal here on Thursday.

The two-time bronze medallist at World Championship notched up a sensational 21-19, 21-10 victory over the All England Champion from Japan in a pulsating semi-final that lasted 49 minutes.

The World No 10 from Hyderabad will next take on two-time World Champion and top seed Carolina Marin of Spain in the summit clash on Friday.

The immensely talented Hyderabadi girl has done a notch better than her illustrious senior Saina Nehwal, who got country's its first medal from badminton -- a bronze in London 2012.

Sindhu had a 1-3 head-to-head record against Okuhara but all that went for a toss as the Indian came out with a well-thought strategy as she engaged the Japanese in long-rallies with her angled returns and deft drops.

In the opening game which lasted 29 minutes, Sindhu opened up a 4-1 lead early on and rode on Okuhara's unforced errors to extend the advantage to 8-4.

The Indian engaged her rival in long rallies and tried to vary the pace and finish them with well-executed drops. A cross court forehand return after a long rally which consisted of 32 strokes helped Sindhu reach 9-6 before the Indian reached the interval with a 11-6 advantage after Okuhara hit long.

The Hyderabadi pushed the Japanese to the corners by playing half smashes and drops, while Okuhara continued to find the net while trying to play the cross court drops from the baseline.

Leading 14-10, Sindhu hit wide and long before coming up with a superb drop even as Okuhara forehand returns. At 16-18, Sindhu failed to negotiate a body return but she again caught hold of the shuttle early using her height and sent it sailing out of the Japanese reach. A missed net shot by Okuhara saw Sindhu reach the game point.

What ensued next was a long rally with Okuhara hitting across as the Indian grabbed the opening game after the Japanese found the net.

So so sooooo proud of you 😘😘 fighter .. 💪💪💪 #favorite #champion @Pvsindhu1 pic.twitter.com/lLkS3gwLrM

Brilliant game on display by @Pvsindhu1. Congratulations to her & coach Gopichand on entry into Finals. Proud & best wishes #RioOlympics2016

What a player !! @Pvsindhu1 I'm waiting for you to join me in the club. You have no idea how lonely it's been !!!