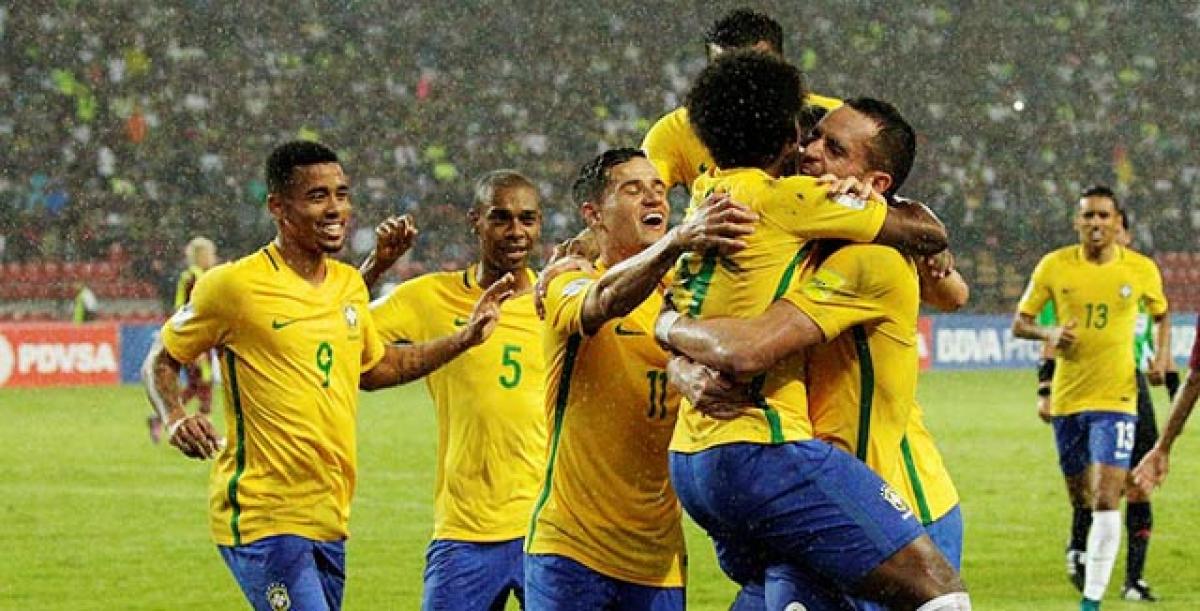 Brazil powered to the top of the table in South America\'s 2018 World Cup qualifying race on Tuesday with a victory over Venezuela as Argentina suffered a shock defeat at home to Paraguay.

​Montevideo: Brazil powered to the top of the table in South America's 2018 World Cup qualifying race on Tuesday with a victory over Venezuela as Argentina suffered a shock defeat at home to Paraguay. Goals from Manchester City teenager Gabriel Jesus and Chelsea's Willian secured a 2-0 win over Venezuela in a match interrupted by a lengthy floodlight failure that plunged Merida's Estadio Metropolitano into darkness.

The victory was Brazil's fourth consecutive win of the qualifying campaign and left the five-time world champions on top of the standings with 21 points after 10 games. The win was the latest evidence of Brazil's resurgence under new coach Tite, who took over following the sacking of Dunga in June after the Selecao's Copa America Centenario flop.

It is the first time since qualifying began that Brazil have led the standings, and the team look firmly on course to maintain their record of never having failed to qualify for a World Cup. The acid test of Brazil's renaissance is likely to come next month when they play old rivals Argentina, who stumbled to a 0-1 defeat at home to Paraguay in Cordoba.

A superb counter-attacking goal from striker Derlis Gonzalez on 18 minutes was enough to give Paraguay all three points as the hosts once again struggled to cope with the absence of Lionel Messi. Argentina have taken just two points from a possible nine in their past three matches, all played without Barcelona star Messi.

The Argentinians rallied furiously in the second half, with Angel Di Maria seeing a goal from a free-kick disallowed because of a foul while both Gonzalo Higuain and Sergio Aguero went close. But with Paraguay goalkeeper Justo Villar in defiant form between the posts, the visitor held on for a battling victory which revives their hopes of snagging one of the qualification berths.

The win left Paraguay just one point behind Argentina in the standings after 10 games. Argentina occupy the fifth qualifying spot in the table with 16 points, with Paraguay just behind on 15 points. Chile, meanwhile, remain outside the qualification places despite their 2-1 victory over Peru in Santiago in the regional derby known as the "Clasico del Pacifico."

Chile desperately needed three points to get back on track after a stuttering start to the qualification campaign. Earlier, leaders Uruguay were held to a 2-2 draw by fourth placed Colombia in an entertaining duel in rain-swept Barranquilla. Center-back Yerry Mina headed Colombia's equalizer five minutes from time after goals from Cristian Rodriguez and Barcelona superstar Luis Suarez had helped Uruguay into a 2-1 lead at the Estadio Metropolitano.