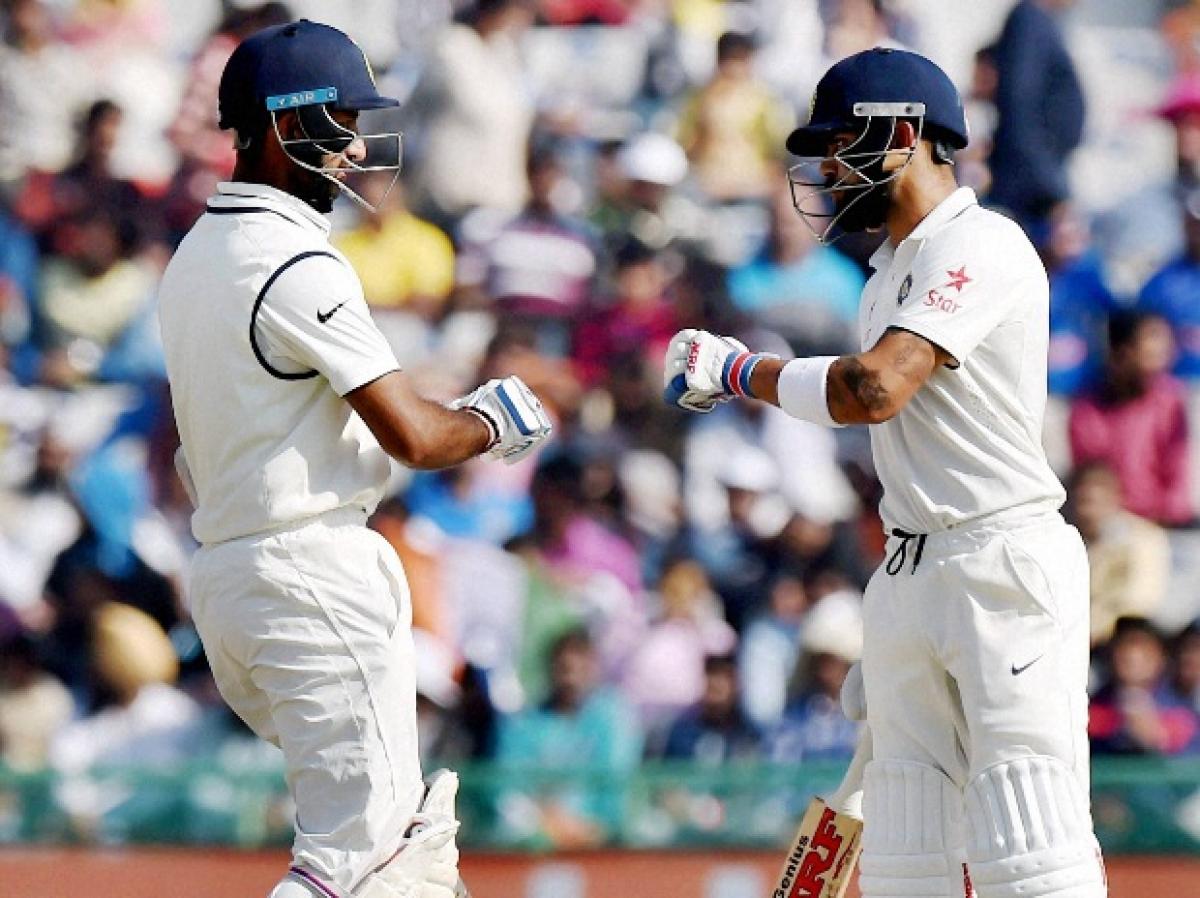 Cheteshwar Pujara and Virat Kohli struck an excellent partnership as India scored 148/2 at tea, still trailing by 135 runs, against England on the second day of the third Test match here on Sunday.

Mohali: Cheteshwar Pujara and Virat Kohli struck an excellent partnership as India scored 148/2 at tea, still trailing by 135 runs, against England on the second day of the third Test match here on Sunday.

Pujara (51 batting) and skipper Kohli (40 batting) were at the crease when umpires called for tea break at the Punjab Cricket Association (PCA) I.S Bindra cricket stadium.

For England, Adil Rashid and Ben Strokes took a wicket each.

Coming together at the fall of opener Parthiv Patel's wicket (42), Kohli and Pujara added 75 runs between them.

Patel enjoyed a steady start to his international comeback, after a gap of years, as India posted 60/1 by lunch.

But he gradually found his groove, hitting a couple of boundaries to get the scoreboard ticking. He notched up six boundaries over the 73 balls he faced until the lunch break.

Vijay, however, was struggling at the other end. His uncomfortable stay of 38 balls ended when a half-hearted flash at a Stokes delivery found a slight outer edge on the way to the wicketkeeper.

Pujara then strode to the middle and played solidly for 22 deliveries - including two hits to the fence - to ensure that the hosts went into lunch without further mishap.

Patel departed a short while after the resumption of play, trapped leg before by Adil Rashid.

The Indian wicketkeeper-batsman scored 42 off 85 balls with six hits to the fence.

That was the only bit of celebration England could enjoy before tea as Kohli and Pujara struck up a steady partnership.

Earlier, England started at the overnight score of 268/8 before fast bowler Mohammed Shami cleaned up the remaining two wickets for figures of 3/63, limiting the visitors to 283 in the first innings.

Shami dismissed overnight batsman Adil Rashid (4) with his very first ball, a superb delivery that pitched on around the off and middle stump and seamed away slightly, taking the outer edge of the bat on its way to wicketkeeper Parthiv Patel.

Anderson, the next batsman in, started off with an edge through the third man area for a boundary. He remained unbeaten on 13.

But the England innings did not last long. Shami trapped Gareth Batty (1) leg before to bag his second wicket of the morning and put an end to the visitors' first innings.