India ready to wrap up series against England 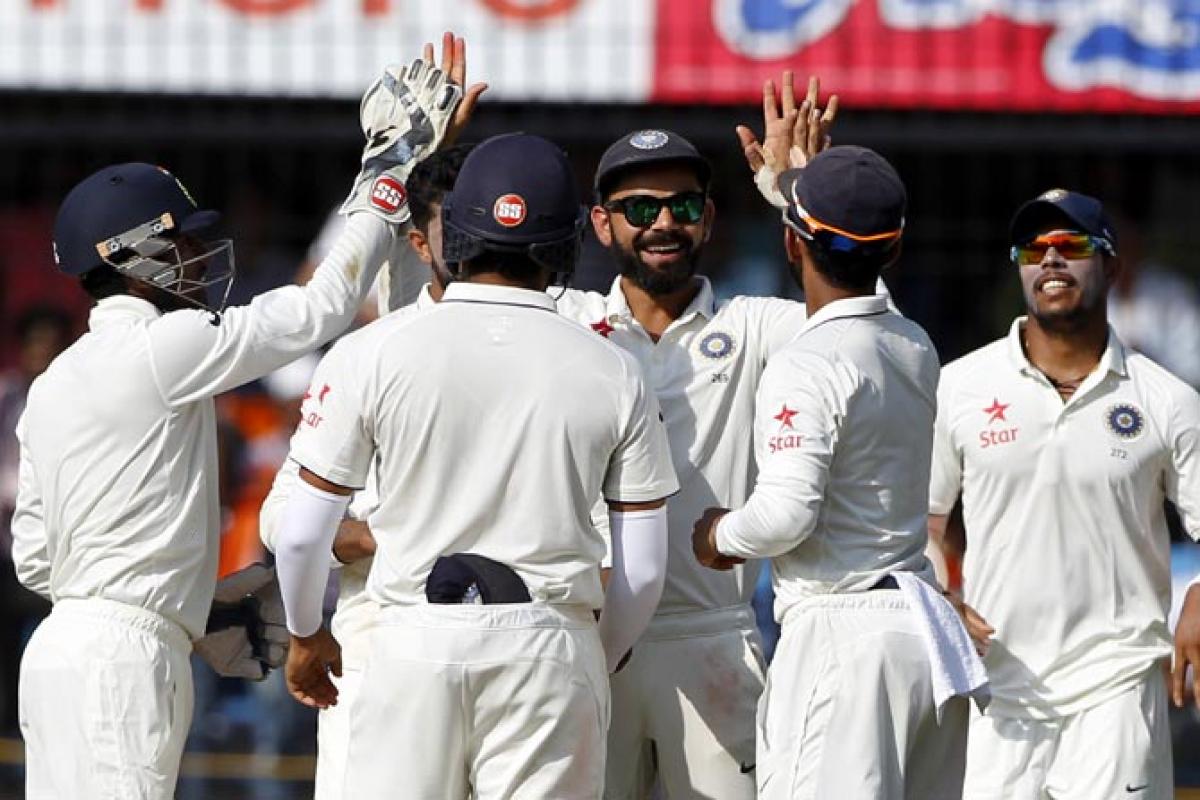 A dominant India will be eyeing to clinch the five-Test series against England with yet another comprehensive victory when the two teams square off in the fourth match of the series starting tomorrow.

Mumbai: A dominant India will be eyeing to clinch the five-Test series against England with yet another comprehensive victory when the two teams square off in the fourth match of the series starting tomorrow.

With an unassailable 2-0 lead after three Tests, the confidence of the Virat Kohli-led team is sky high and they would like to regain the Anthony de Mello Trophy which they had lost to Alastair Cook's side back in 2012.

Even if England manage a draw, India will win the series after the visitors' hat-trick of wins- 2011 in England, 2012 in India and 2014 in England again.

In their last two Test meetings at the Wankhede, England had prevailed over India and the 2012 Test match will always be remembered as one where Kevin Pietersen played perhaps one of the finest knocks by an overseas batsman on Indian soil.

The tourists suffered a heavy loss in Mohali and are now expected to come hard at the hosts after spending a week away from the sub-continent - in Dubai - licking their wounds and recharging their batteries.

Hameed's loss due to a finger fracture sustained in Mohali is a big blow to England who will be hoping that the South Africa-born Jennings will step into the other youngster's shoes seamlessly and perform well the difficult role of opening the batting with skipper Alastair Cook.

India, too, have had injury concerns but as head coach Anil Kumble pointed out at a media conference yesterday, the newcomers had slipped in and performed well to contribute to the hosts' domination of the rubber after having played second fiddle to the tourists in the series opener at Rajkot.

India's top-order batting has been shored up by the sublime form exhibited by No 3 Cheteshwar Pujara and captain Virat Kohli and any subsequent wobble has been arrested by the lower order batsmen led by Ravichandran Ashwin.

Parthiv Patel, who was recalled to the team after an eight-year gap, took on the unenviable job of opening the batting against the top-class England new-ball attack led by the redoubtable James Anderson with elan in Mohali, making 42 and 67 respectively.

With the return to fitness after a forearm injury of KL Rahul, who did not play the third game of the series, the pint-sized wicket keeper is expected to bat in the middle-order.

The lone change that is likely to happen is replacement of Karun Nair, who made his debut in Mohali, making way for Rahul, as the rest of the combination is unlikely to be tinkered with unless there's a last-minute injury.
(REOPENS DEL 9)

Although the Indian batting has held up, thanks to the excellent form of Pujara and Kohli higher up and the resilience of the lower order, the poor run of opener Murali Vijay and Ajinkya Rahane must be causing some concern.

Vijay started off the series well scoring a hundred at Rajkot while Rahane had scored a 188 at Indore in the final Test against New Zealand.

Vijay has been out on a few occasions, fending awkwardly at the short ball directed at his rib cage by Anderson and company and the England fast bowlers must be licking their fingers to have another go at the Tamil Nadu player on a track, which has helped pacers in the past.

Rahane, on the other hand, has been out to poor shot selection and has had a stint with his personal coach Praveen Amre prior to entering the high-octane arena and the team would be hoping he comes good at his home ground.

The Indian bowling attack is expected to remain the same - with Mohammed Shami and Umesh Yadav using the new ball before the spin trio of Ashwin, Ravindra Jadeja and impressive newcomer Jayant Yadav coming on to torment the England batsmen.

The seven days' break after the third Test must have been a great help to the bowlers, especially the two pacers, to recover from their exertions, and they would be eager to have another tilt at the unsettled England batting line-up.

England's woes have started because Cook's form has dipped along with that of their other main batsman, Joe Root, after Rajkot and they will take comfort from the fact that it was at the Wankhede that Cook thrived four years ago in the company of Kevin Pietersen to mark a turnaround in the series.

The good news for them is Stuart Broad's expected return to full fitness after having taken almost a fortnight to recover from his foot injury sustained in the Visakhapatnam Test match.

England, thus, are expected to go in with a four-pronged pace attack to try and unsettle the Indian batsmen on a track that is expected to take slow turn, backed up two spinners.

However, the visitors are up against a team on the cusp of repeating their previous best unbeaten streak in Tests.

Since losing to Sri Lanka in Galle last August, the hosts have not tasted defeat in their last 16 Tests, winning 12 and drawing the other four.