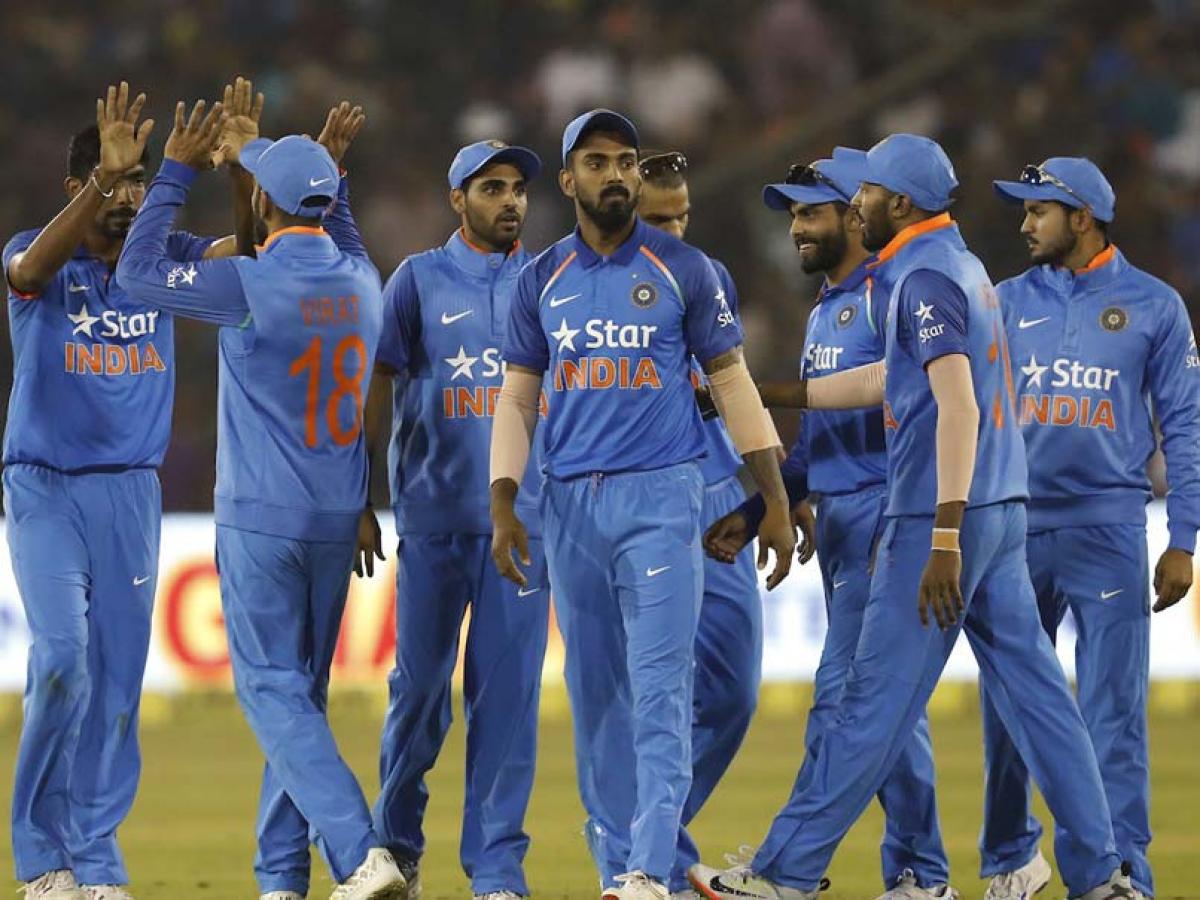 The series in their grasp along with a distinct psychological edge, India would be aiming for a clean-sweep to dent England\'s confidence a bit more in their final ODI outing before the Champions Trophy in less than five months, here tomorrow.

Kolkata: The series in their grasp along with a distinct psychological edge, India would be aiming for a clean-sweep to dent England's confidence a bit more in their final ODI outing before the Champions Trophy in less than five months, here tomorrow.

England have been winless in the disastrous tour so far, having been outplayed in the Test series prior to the ODIs. And it looks unlikely that the tide would turn dramatically tomorrow.

India's old brigade of Yuvraj Singh and Mahendra Singh Dhoni, who stepped down from limited-overs captaincy ahead of the series, turned back the clock to help the team once again out-bat England by 15 runs in the second ODI.

The Eoin Morgan-led outfit has batted with as much verve but has fallen short everytime -- be it while chasing 382 in Cuttack or defending a target of 351 in Pune.

Morgan himself has been in stupendous form and had almost overshadowed Yuvraj and Dhoni's record 256 partnership with a sensational counter-attacking innings of 102 from 81 balls in Cuttack.

Indian batsmen, however, have been ruthless as a unit and showed that a target of 350 is just a number especially when the ever-reliable Virat Kohli is on song.

The biggest plus for India has been Kedar Jadhav, whose 76-ball 120 in Pune played a key role in overhauling a 351-run target.

They went a notch higher in Cuttack where India's net gain in two warhorses, Dhoni and Yuvraj, coming among runs put them right in frame ahead of the Champions Trophy.

The third and final ODI before the marquee event in England will give an opportunity for the defending champions to sort out the opening riddle.

The biggest concern has been Shikhar Dhawan, who has been struggling to get into the rhythm. With scores of one and 11 in the two ODIs, it's high time that the team think-tank looks beyond Dhawan, especially when they have an in-form Ajinkya Rahane warming the bench.

An injury scare yesterday, which prompted Dhawan to make a trip of the hospital, could lead to a change tomorrow.

The other opener K L Rahul too is yet to replicate his Test form into ODIs and has scores of eight and five in the two ODIs so far.

The other Indian opener, Rohit Sharma, who is recovering from an injury will be sorely missed at this venue given that in the last match here two years ago, he had struck a world record 264.

The rest of the batting line-up looks set and need not be tinkered with but Kohli may look to tweak his seam attack a bit with Hardik Pandya's bowling lacking bite.

A seaming all-rounder, Pandya conceded 60 without taking any wicket in Cuttack as Morgan hammered him with disdain.

Looking forward to the Champions Trophy, Pandya may seem to be an investment but only time will say whether it's wise or not.

On the other hand, Bhuvneshwar Kumar, who was brought in place of Umesh Yadav in Cuttack, showed terrific control at the death.

Kohli would hope that the likes of Pandya and Jasprit Bumrah lived up to the faith and hit the yorker length consistently.

The last match witnessed an aggregate of 747 runs and such a scenario, the battle will boil down to the two teams' bowling attack and seamers will play a big role.

It's an area where England has struggled to match India, leading to their downfall this series.

Ben Stokes may be a valuable member of the side with his contribution with the bat but he has leaked runs abundantly in Pune and Cuttack.

Liam Plunkett, who replaced Adil Rashid, was also expensive, giving away at 9.10 runs per over.

England need to find better bowlers and Morgan should show some aggressive captaincy by using his bowlers at the right time.

Morgan's defensive mindset was clearly seen in Cuttack when he took away Chris Woakes after a brilliant spell of 5-3-14-3. Woakes was reintroduced only in the 39th over when it was too late with India eyeing 300-plus easily.

He also let batsmen settle down by giving them easy singles, removed slips where two catches of both Dhoni and Yuvraj flew past.

England have suffered an injury blow with opener Alex Hales ruled out with a broken right hand. Johnny Bairstow has come in to replace Hales.