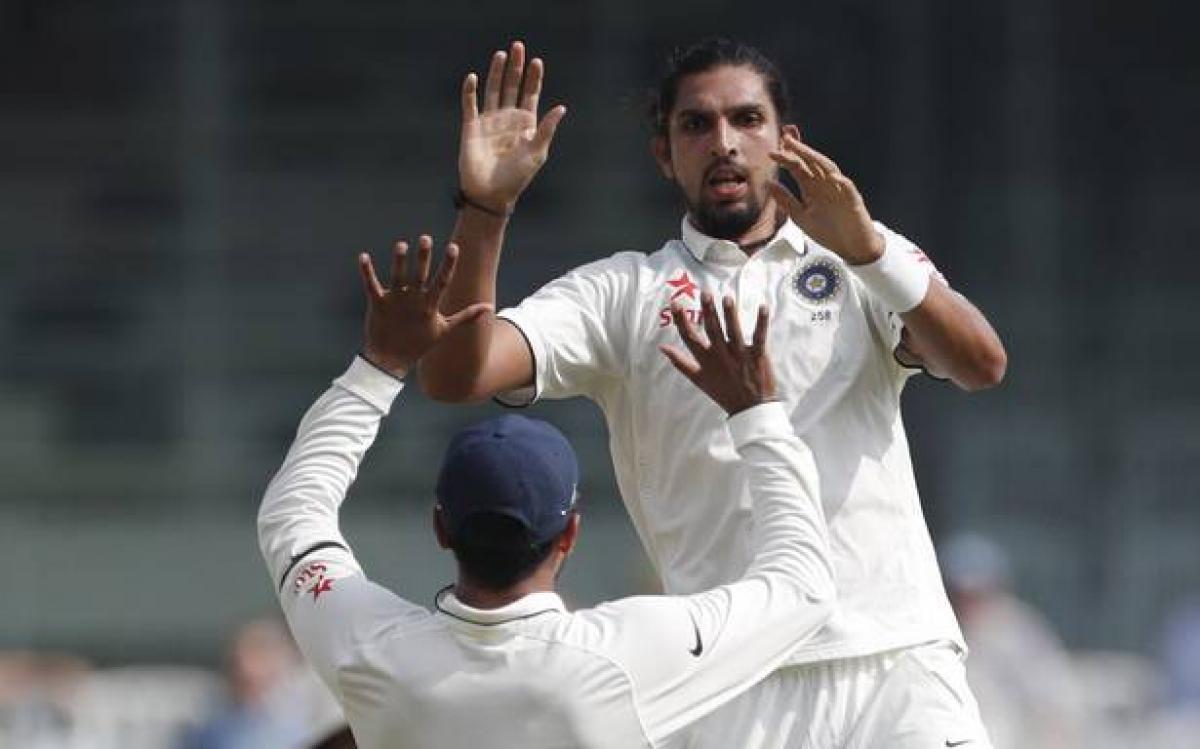 Umesh Yadav rattled Bangladesh batsmen with pace while Ishant Sharma got some reverse swing as the visitors were left struggling at 125/4 at lunch on the third day of the one-off cricket Test against India here.

HYDERABAD: Umesh Yadav rattled Bangladesh batsmen with pace while Ishant Sharma got some reverse swing as the visitors were left struggling at 125/4 at lunch on the third day of the one-off cricket Test against India here.

Bangladesh need another 363 runs to avoid follow-on which is highly unlikely looking at the apparent discomfort that their batsmen endured while facing the Indian speedsters.

India had scored a mammoth 687 for 6 in their first innings.

The first session of the third day certainly belonged to Umesh, who worked up good pace for a consistent period of time.

The only batsman who had looked comfortable was Tamim Iqbal (25) and he was run-out after a horrible mix-up with Mominul Haque (12).

The miscommunication, while going for the second run, became Tamim's undoing as he could add only a run to his overnight score.

Mahmudullah Riyadh (28) and Mominul both were distinctly uncomfortable as Virat Kohli always employed the pace-spin attack from both ends.

After Umesh (2/33) bowled three overs from the pavilion end (the Shivlal Yadav End), Kohli cleverly switched him to the far end (VVS Laxman) from which he bowled another 6 overs at a stretch. He continuously troubled both Mominul and Mahmudullah for a considerable period of time with his out-swingers.

After bowling a number of out-swingers, he got one to come back sharply into Mahmudullah, which trapped him in-front. India went for a DRS but it was an Umpires' Call despite the delivery grazing the leg stump.

But Umesh didn't lose heart and left-hander Mominul got a fuller delivery that came in after pitching. The umpire promptly adjudged leg before and the batsman didn't even take a review.

It was a testimony to Umesh's stamina that his pace never dropped during the nine overs that he bowled in the morning. Mahmudullah and Shakib Al Hasan (29 batting) then added 45 runs during and also got their share of streaky boundaries in between.

But right-hander Mahmudullah was never in control during his stay. When Umesh was bowling, it was Jadeja bowling from the 'pavilion end' and often the ODI specialist would rush to meet the quicker deliveries from Jadeja. Once Kohli decided to rest Umesh and Jadeja, he introduced Ishant (1/38) and Ashwin from either ends.

With the 'SG Test' ball now being 30 plus overs old and the team having maintained the shine, it was time for the lanky Ishant to get it to reverse and hit that length close to the full which makes life difficult for the batsman.

Mahmudullah, who looked like a walking wicket, got one that darted in sharply with hint of reverse and was beaten. The umpire adjudged the batsman leg before, who went for a review which didn't work in his favour.

India, however, lost their second DRS appeal when Ashwin got one to straighten enough, beating Shakib's bat but it was ruled not out.