Premier League: Mane at the double as Liverpool beat Spurs 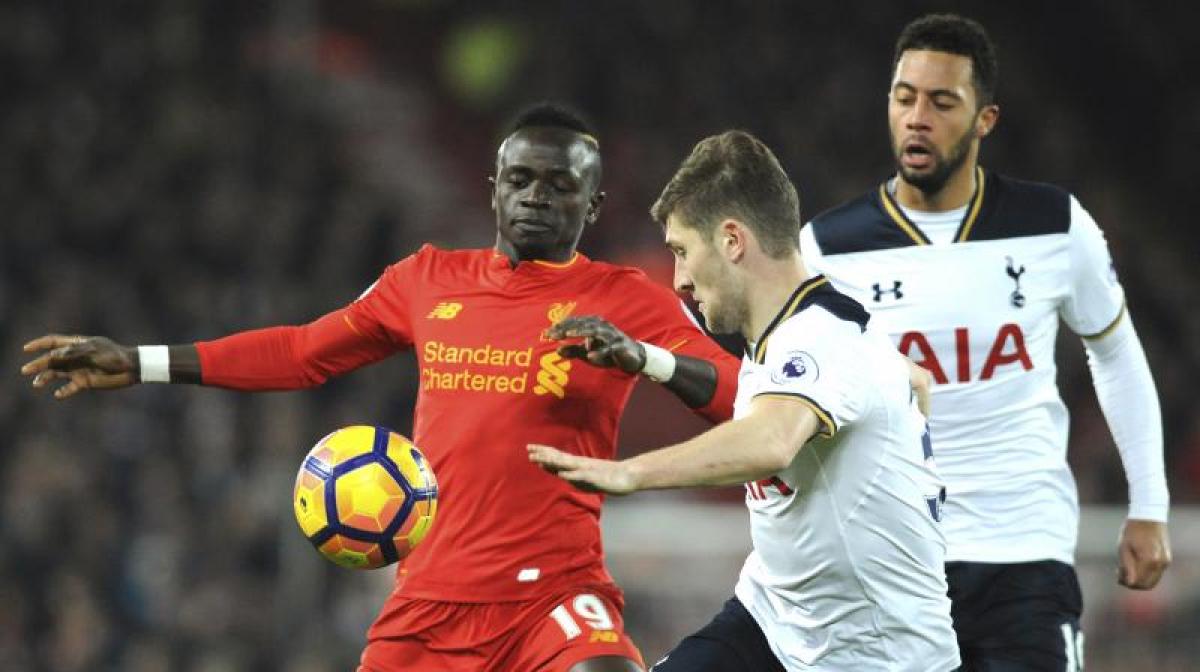 The jet-heeled Sadio Mane scored a quick-fire brace as Liverpool revitalised their Premier League campaign with an impressive 2-0 win over Tottenham Hotspur at Anfield on Saturday.

The jet-heeled Sadio Mane scored a quick-fire brace as Liverpool revitalised their Premier League campaign with an impressive 2-0 win over Tottenham Hotspur at Anfield on Saturday.

"It was how you have to play against Tottenham and of course we had to show a reaction," Klopp told Sky Sports. "The reaction was perfect. It was an outstanding performance."

Liverpool moved back into the top four, above Manchester City, who visit Bournemouth on Monday, and Manchester United, who briefly climbed above them after beating Watford 2-0.

Tottenham remain second, but they are now level on points with Arsenal after Alexis Sanchez scored twice to earn Arsene Wenger's side a much-needed 2-0 victory over Hull City.

Spurs' setback means Chelsea can move 12 points clear at the summit if they win at Burnley on Sunday.

While the title seems destined for Stamford Bridge, the battle for positions below Chelsea could not be tighter, with two points separating Spurs in second and United in sixth.

Liverpool badly missed Mane during his time at the Africa Cup of Nations with Senegal and he gave a dazzling display of his qualities with two goals in the first 18 minutes at Anfield.

For the first goal, in the 16th minute, he raced onto Georginio Wijnaldum's incisive pass before lifting a shot past Hugo Lloris.

Two minutes later he made it 2-0 with his 11th goal of the season, sparking a raid on the Spurs box by robbing Eric Dier and then slamming in after Lloris had saved from Adam Lallana and Roberto Firmino.

"We could have scored again," Klopp said. "There were some outstanding individual performances."

Tottenham manager Mauricio Pochettino pulled no punches, saying: "The whole team were poor. It is about balance and today it was poor. That is the truth. In the first 45 minutes you saw a team that is not ready to fight for the Premier League."

The Chilean forward contentiously scored with his hand in the 34th minute and netted a stoppage-time penalty after Sam Clucas had been sent off for handball to take his tally for the campaign to 17 goals.

It got Arsenal back to winning ways following successive defeats by Watford and Chelsea and left them in third place, nine points behind Chelsea.

Wenger dismissed a claim by former Arsenal striker Ian Wright that he had admitted his time at the club was coming to an end.

"I didn't give any indication about my future," Wenger told reporters. "You know I appreciate very much that you want me to rest, absolutely. But I am not ready for that yet."

United closed to within a point of the Champions League places by beating Watford, Anthony Martial marking his return to the starting XI by scoring and setting up the opener for Juan Mata.

Jose Mourinho's side have now gone 16 league games unbeaten and while they remain sixth, they are just a point below both Liverpool and City.

"Martial deserves the chance," Mourinho told the BBC. "He has worked harder than ever in the last two weeks in the way I like: silence, but hard."

He added: "In the first half the football was fabulous. When I got the job, they were saying at Manchester United you need to play football in a certain way and I agree."

Seventh-place Everton squandered a chance to close on the teams above them after being held to a 0-0 draw at 15th-place Middlesbrough.

Sunderland remain bottom of the table after Southampton's new Italian striker Manolo Gabbiadini scored a slick brace in a 4-0 win at the Stadium of Light. Jason Denayer also put through his own goal before Shane Long completed the scoring in added time.

Second-bottom Crystal Palace were also beaten, Joe Allen scoring in the second half to give Stoke City a 1-0 win that saw Mark Hughes's team climb to ninth.

Gareth McAuley was credited with a stoppage-time equaliser for West Bromwich Albion in a 2-2 draw at West Ham United. After Nacer Chadli put West Brom ahead in the fifth minute, West Ham hit back through Sofiane Feghouli and Manuel Lanzini before McAuley got a decisive touch to Jonny Evans's header at the death.