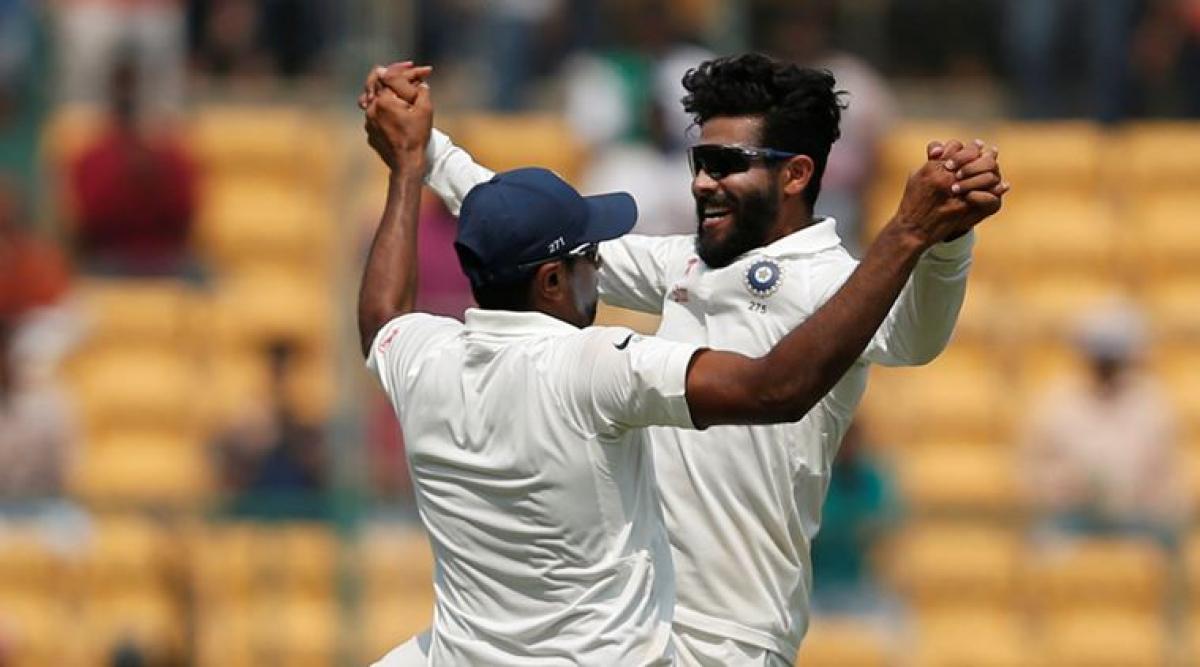 India grabbed three quick wickets in the second session with left-arm spinner Ravindra Jadeja claiming two of them as they reduced Australia to 163 for 5 at tea in second cricket Test here today.

Bengaluru: India grabbed three quick wickets in the second session with left-arm spinner Ravindra Jadeja claiming two of them as they reduced Australia to 163 for 5 at tea in second cricket Test here today.

After taking two Australian wickets for just 47 runs in the morning, the Indians took three wickets, including that of a determined opener Matt Renshaw (60), late in the post-lunch session to come back into the match.

Jadeja, who had picked up a wicket in the morning session, bagged two more, including that of Renshaw, in nine overs while conceding 19 runs.

At the end of the second session, Jadeja's figures were three wickets for 32 runs in 13 overs, a bowling performance which helped India to bounce back into the game.

The other wicket taker was Ishant Sharma who dismissed Mitchell Marsh for a duck at the stroke of tea.

Australia could muster 76 runs while losing three wickets in 35 overs in the session. Shaun Marsh was batting on 38 from 127 balls at the break.

The Indians toiled hard for more than 20 overs in the second session without any success with young opener Matt Renshaw and Shaun Marsh showing tremendous application on a turning track for a 50-plus partnership.

The Australian duo's doggedness looked like taking away the momentum from the fired-up Indians who showed a lot of intent today and the visitors were inching towards the home side first innings total of 189.

Renshaw, who stitched 52 runs for the third wicket with Shaun Marsh, departed in the 67th over and that changed the scenario as Australia lost three wickets in 13.3 overs for the addition of just 29 runs.

Australia now trail by 26 runs with five first innings wickets in hand on a difficult Chinnaswamy Stadium pitch where run-making has been extremely hard.

Renshaw, who dropped anchor to build a solid innings, took his time to score runs. He reached to his third half century when he clipped Ravichandran Ashwin through mid-wicket for a couple of runs.

Renshaw's fifty came in 240 minutes of 183 balls with five boundaries to his name. His fifth boundary came after facing 71 balls.

Jadeja had the last laugh as he forced Renshaw, who had belted the same bowler over his head for a magnificent six, to come outside the crease to play the ball. The batsman missed it completely and Wriddhiman Saha dismantled the bails before the opener could get in.

Jadeja then removed Peter Handscomb, after the batsman scored 16 runs of 30 balls with two boundaries. He came down the track and tried to flick it but failed to get contact as the ball went straight towards Ashwin at mid-wicket.

Ashwin dived towards his right and got his hand to it, the ball fumbled out but luckily it again hit his arm and bounced again which helped him gather it in the second chance.