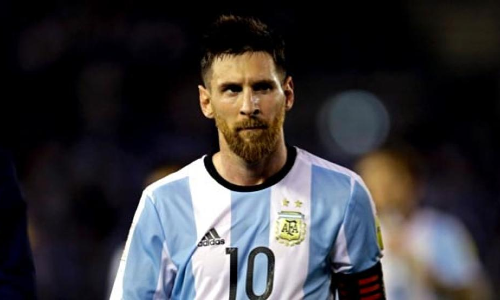 Lionel Messi has been banned from Argentina\'s next four World Cup qualifiers, starting with Tuesday\'s game in Bolivia.

ZURICH: Lionel Messi has been banned from Argentina's next four World Cup qualifiers, starting with Tuesday's game in Bolivia.

FIFA says Messi was banned for verbally abusing an assistant referee during a home qualifier against Chile on Thursday.

FIFA intervened when the incident was not initially reported by the Brazilian referee after Argentina's 1-0 win at Monumental Stadium in Buenos Aires.

It was judged a red-card offense for Messi, who scored the only goal from a first-half penalty.

Television pictures showed Messi reacting angrily late in the game when the assistant flagged him for a foul. He waved his arms and shouted profane insults at the Brazilian official.

After the game, Messi refused to shake hands with the assistant who had annoyed him.