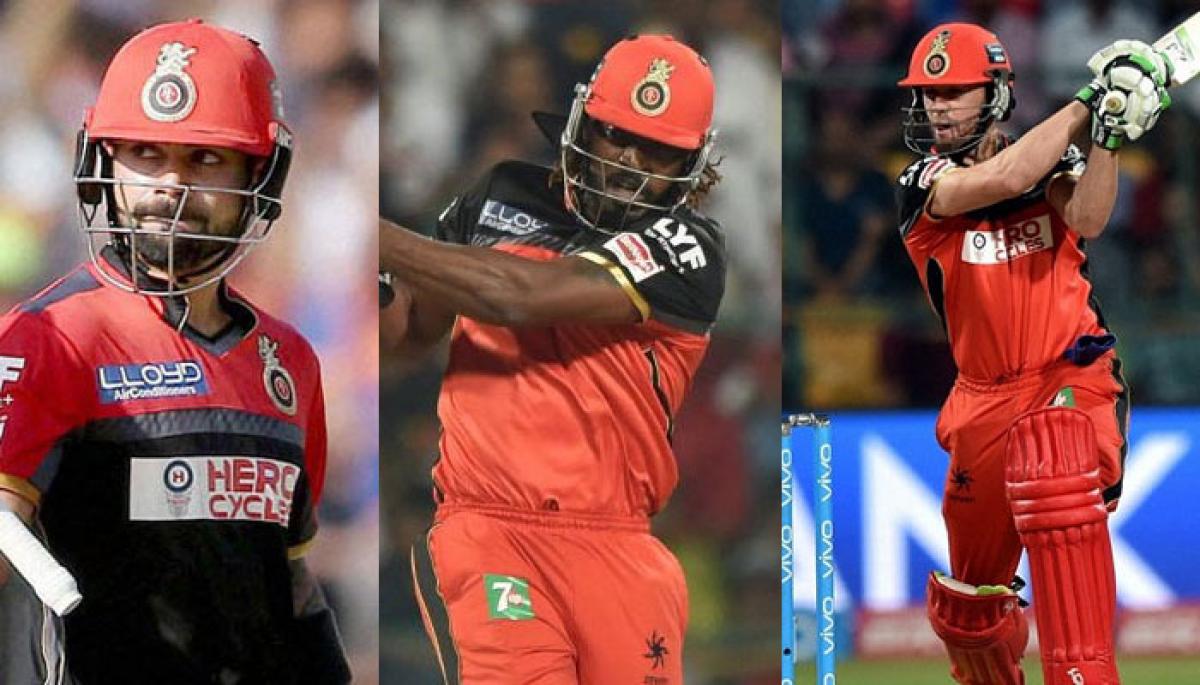 Royal Challengers Bangalore\'s performance in the on-going Indian Premier League has been shocking to say the least.

Royal Challengers Bangalore's performance in the on-going Indian Premier League has been shocking to say the least.

Over-dependance on skipper Virat Kohli, AB de Villiers and Chris Gayle in the absence of a solid back-up plan has been the primary reason for Royal Challengers Bangalore's poor show in the on-going Indian Premier League.

Despite being a team game, cricket in its essence is an individual sport and no one would agree to it more than Kohli, with his team's performance in the IPL bordering on disastrous. His record 973 runs, with four hundreds in a single IPL edition, is not expected to be broken anytime soon. Nor will be AB de Villiers' 687 runs, which was the third highest of last season.

Cut to IPL-10, and RCB are on the verge of getting knocked out and even winning all their matches from now on may not be good enough for them to qualify for the play-offs. There are multiple factors that could be associated with the debacle, including Kohli's assessment about "lack of intent".

Perhaps RCB or the captain could have never imagined that the 'Three Musketeers' - Kohli, De Villiers and Gayle would all hit a rough patch at the same time. KL Rahul's shoulder surgery added to their list of woes as the batting completely fell apart. Both Kohli and De Villiers were coming back from injuries and took time to hit straps.

Kohli (164 from five games), De Villiers (150 from 5 games) and Gayle (152 from 5 games) have had modest returns, but that can happen with any players. Even limited overs international Kedar Jadhav, with 206 runs and a single half-century, hasn't exactly set the stage on fire. The Chinnaswamy track, which has been a belter over the years, has been two-paced this time and that has not helped their cause either.

Players are supposed to go through a dip in form but in case of RCB, it has hit them hard as the India stars have not lived upto the expectations. Testimony to that is the total of five half-centuries by the RCB batting line-up with two coming from Kohli and one each from Gayle, De Villiers and Jadhav.

Last year Kohli and De Villiers had four centuries and 13 half-centuries collectively. Together they hit a whopping 75 sixes. The other star in the line-up -- Shane Watson, a retired international has managed only 61 runs in five games and leaked runs at more than 10 an over. But the most disappointing aspect has been the trio of Indians -- who have been super flops.

The two all-rounders -- seamer all-rounder Stuart Binny, with 77 from 7 and Pawan Negi, a Rs 1 crore buy with 67 from seven games -- failed to raise their game. Worse Mandeep Singh, who has played 8 out of the 9 games, has totaled 73 runs with a strike-rate of 90. The lack of options in the dug-out is the reason that Kohli has not been able to replace Mandeep despite one failure after another.

"It is never easy to lose games," Kohli said after losing to Gujarat Lions. "You got to come out and play with intent. The only way to come out of it is to play positive cricket. We are putting too much pressure on the team. Individuals need to stand up and take responsibility," Kohli's angst was understandable.

A batting line-up that had once intimidated has fallen apart in such a manner that Jamaican Gayle -- having grown up on Sabina Park track was made to look like a novice by Umesh Yadav on an Eden Gardens surface where the ball was darting around. In fact, Gayle didn't have a great last season either with 227 runs, but the team management didn't plan what it should have should he failed.

Any retired international remains rusty and it's not easy just to play IPL to IPL. Watson's poor show is a reflection of that. They have not been simply able to dominate this year. A total of 85 boundaries across nine games tell the story. To put it in perspective, Gautam Gambhir and Robin Uthappa hit 66 boundaries for Kolkata Knight Riders.

Former chinaman bowler Brad Hogg feels coming from injuries has been a factor but then after a consistent high, there would be phases where things may not go as per expectations.

"Kohli, AB and Gayle have all struggled with injuries. Since they have world class cricketers who have dominated the world stage for so long, you expect them to deliver. There would be some tournament where they won't deliver," Hogg said when asked about RCB's performance.

"You have got to assess conditions, situations they are in. Kohli has played a lot of cricket this year and had injuries. AB and Gayle have had their issues too. Injuries have played more part than their talent. They have been entertainers and let's be grateful for the entertainment they have provided us. May be, we should be a bit more patient with them," said Hogg.