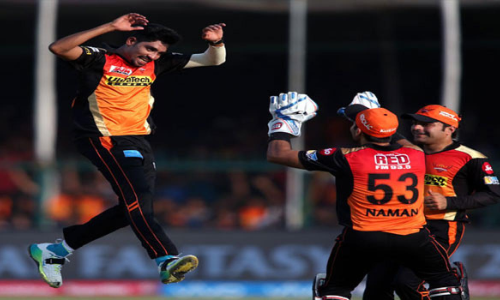 Skipper David Warner led from the front to help Sunrisers Hyderabad cement their place in the Indian Premier League (IPL) play-offs after the visitors comfortably beat Gujarat Lions by eight wickets at the Green Park Stadium here on Saturday.

Kanpur: Skipper David Warner led from the front to help Sunrisers Hyderabad cement their place in the Indian Premier League (IPL) play-offs after the visitors comfortably beat Gujarat Lions by eight wickets at the Green Park Stadium here on Saturday.

Warner scored a 52-ball unbeaten 69 and was well complimented by young Vijay Shankar's 44-ball unbeaten 63 to lift the visiting side to the second spot in the IPL standings, with 17 points from their 14 games.Chasing a decent 155, Warner held up one end firmly after veteran medium pacer Praveen Kumar took two wickets in the same over to dismiss Shikhar Dhawan (18) and Moises Henriques (4).

Dhawan gave the visitors a rollicking start, smacking three consecutive boundaries off left-arm seamer Pradeep Sangwan, during his 11-ball stay before a slow off-cutter from Praveen got the southpaw walking back.Henriques, who came in next was undone by another wily delivery from Praveen, which stumper Dinesh Karthik latched on comfortably to reduce the visitors to 25/2.

The fall of Henriques brought in the in-form Vijay, who continued his good run with the willow to match shot by shot with his skipper.The left-right duo started cautiously, dealing mostly in singles and hitting the occasional boundaries to take the visitors to 82/2 midway into the innings.

Warner batted sensibly to bring up his half century off 41 balls before Vijay joined the party to get to his fifty in 35 balls as the duo went on to add an undefeated 133-run third wicket stand to take their team home in style.Earlier, Gujarat Lions squandered an excellent start to post 154 after being asked to bat first. Gujarat rode on power packed batting by openers Ishan Kishan and Dwayne Smith to cross the 100-run mark in the 10th over and were in a comfortable position at the halfway stage of their innings.

However, they seemed to inexplicably lose their wits and lost 10 wickets in the space of just 43 runs to be all out in 19.2 overs. Young pacer Mohammed Siraj and Afghan leg-spinner Rashid Khan were the lynchpin for Hyderabad as they produced some excellent bowling to contain the dangerous Lions batting line-up.

Siraj posted figures of 4/32 in his four overs while Rashid returned 3/34. Experienced pacer Bhuvneshwar Kumar had figures of 2/25 with fellow pacer Siddarth Kaul also bagging a wicket.Kishan was the top scorer among the Gujarat batsmen with 61 runs off 40 balls with five boundaries and four sixes. Smith plundered 54 runs with seven hits to the fence and two sixes studding his 33-ball knock.The duo produced an opening partnership of 111 runs off 65 deliveries to give Gujarat an excellent start before the host loy the momentum and the plot.