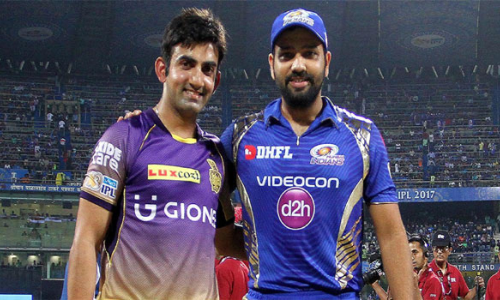 In fact, Mumbai Indians had pulled off their first win of the season against KKR at the Wankhede stadium last month when they beat them by four wickets with just one ball to spare.Mumbai once again got the better of KKR when they handed them a nine-run defeat in their last league match at Edens Gardens.

Come Friday, Mumbai Indians and KKR will face each other once again with the IPL final spot at stake after suffering contrasting fates in qualifier 1 and eliminator respectively.Mumbai are coming into the match after a 20-run defeat against Rising Pune Supergiant, while KKR defeated Sunrisers Hyderabad by seven wickets via Duckworth-Lewis method in a rain-truncated eliminator on Wednesday night.

Both Mumbai and KKR have won the IPL trophy twice in the last nine editions and a win will take them to the final against Rising Pune Supergiant to be played in Hyderabad on Sunday.Mumbai's batting has been remarkable this season with openers Lendl Simmons and Parthiv Patel giving them good starts and skipper Rohit Sharma, Ambati Rayadu and Kieron Pollard firing in unison.

Adding to this, the Pandya brothers -- Hardik and Krunal -- have been exceptionally good whenever the team has needed them.With 10 victories in the league stage, table-toppers MI have been in rampaging form and they would like to forget their defeat against Pune and rise to the big occasion.

In bowling, Mumbai may continue to open their attack with Sri Lankan Lasith Malinga and Kiwi Mitchell McClenaghan.
Jasprit Bumrah has been their best death overs specialist and along with Hardik, he will have to play a key role to restrict KKR, which boasts of some big names like Chris Lynn, Gautam Gambhir and Robin Uthappa, among others.
After clinching a win against Hyderabad on Wednesday night, the Shah Rukh Khan-owned side would like to continue its winning momentum.