Teacher of the Year

There was a time the school teacher in the village or in the city was a prominent character in our films. Over the years the teacher was reduced to a...

There was a time the school teacher in the village or in the city was a prominent character in our films. Over the years the teacher was reduced to a caricature in our stories and gradually disappeared from our films to make place for more glamorous, interesting professions

On September 5 we celebrated the Teachers Day. There was a time the school teacher in the village or in the city was a prominent character in our films. Over the years the teacher was reduced to a caricature in our stories and gradually disappeared from our films to make place for more glamorous, interesting professions. But characters are in a way like fashion and as society changes, some forgotten heroes return to the big screen and the teacher is one of them.

On this special date we revisit the guru shishya parampara in Hindi films, not necessarily traditional and certainly not always via the class room but significant moments that made cinema special.

On top of my list is Abhi Bhattacharya singing ‘Insaaf ki dagar se bachao dikhao chalke ye desh hai tuhara neta tuhi ho kalke…’ and a group of children including child star Aruna Irani repeating the words after him in an open village classroom. David as John Chacha in ‘Boot Polish’ is the only hope for the orphan street kids living in despair. John Chacha aspired to make the children self reliant and lead a life outside of the shanty town. He has dreams of a utopian world and sings inspirational poetry to the kids like ‘Nanhe munne bache teri muthi mein kya hai…’ to which they chorus, ‘Muthi mein hai taqdeer hamari…’Cinema of that era were inspirational and though India was free, filmmakers understood that it was a long journey before every Indian was in a position to conquer his destiny.

In the olden days we made films especially for children and parents made it a point to show these to the family. ‘Jagruti’ was one of them and told the story about incorrigible students in a hostel and their disregard for authority. The principal is fed up of their truants and on the verge of dispelling them when a dynamic teacher arrives and takes it upon himself to reform the errant children. Many years later the same plot was repeated in ‘Imtihaan’ with Vinod Khanna playing the idealistic professor which had similarities with Sidney Poiter’s ‘To Sir with Love.’

The teacher in Hindi films symbolised the conscience be it Vidya as Nargis singing ‘Ichak dana...’ to the kids in ‘Shri 420’ or decades later Aloknath as Master Dinanath taking up the challenge of reforming a prostitute in Mukul Anand’s ‘Agneepath.’

Interestingly, some films depicted the child as the father of the man and the best example of this was Raj Kapoor’s ‘Jagte Raho.’ An innocent but frightened Raj Kapoor hides all night in dark corridors until a five year-old asks him if he has done any thing to fear. That is when he realizes that if his conscience is clear he can walk free without fear. In ‘Satyakam’ little Sarika embraces truth upfront as Ashok Kumar with all his wisdom and knowledge struggles to face the truth. In ‘Dayavan,’ the young hero asks his smuggler father if he is a good man or a bad man... Decades later when the hero is being condemned by law, his grandson asks him if he is a good man or a bad man and on both these moments the senior has an answer for the junior that is convincing. 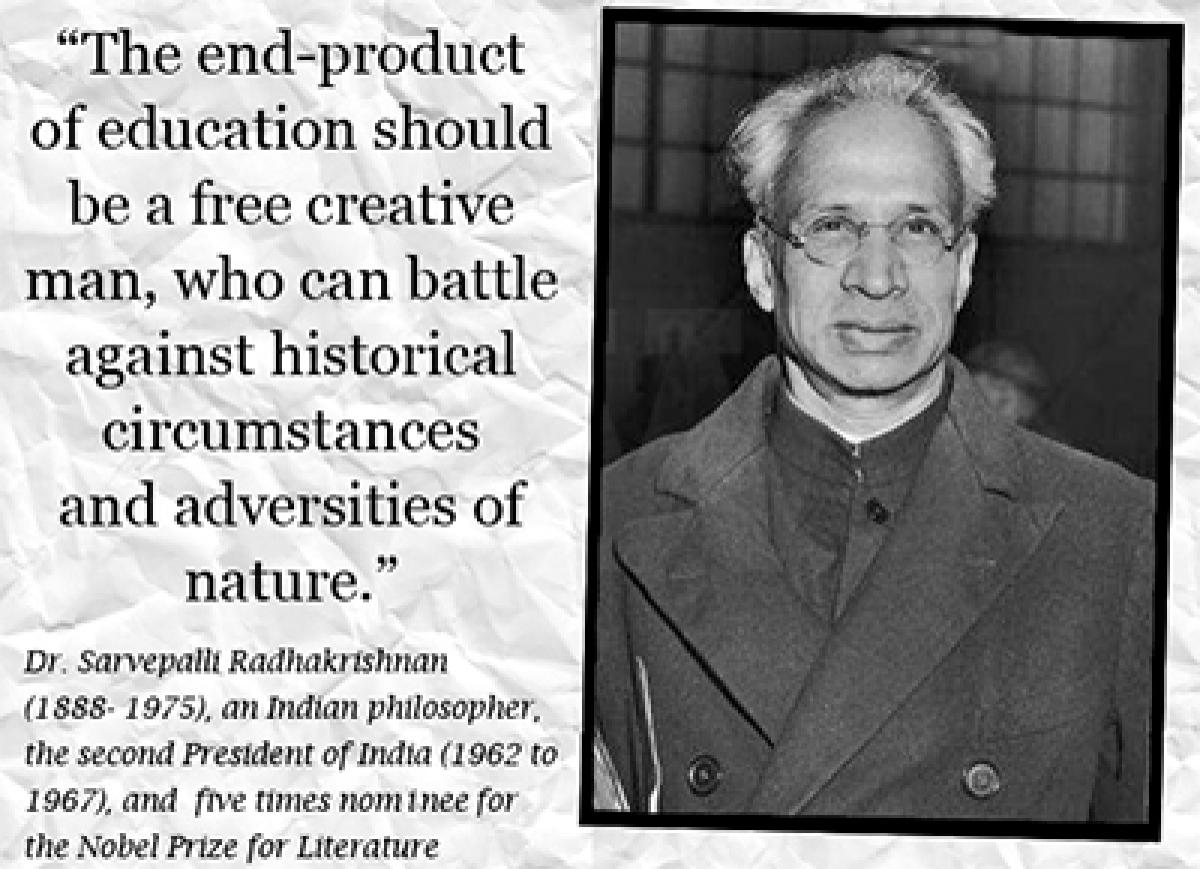 In Yash Chopra’s ‘Deewar’ a police inspector drops by at his convict’s home to offer food and solace but they refuse. In fact AK Hangal is critical of his son’s conduct and Shashi Kapoor finds out he has been a school teacher. Shashi Kapoor touches his feet and says, ‘Itni badi shiksha kisi teacher ke ghar se hi mil sakti thi…’

In ‘Bawarchi’ Rajesh Khanna explains to Jaya Bhaduri’s arrogant cousin that talent without modesty is futile. In ‘Khubsoorat ‘we relish the value of simple joys through a spirited Rekha. In ‘Bemisaal’ it is a negative image of a shishya where an upright teacher is seduced by his nymphomaniac student.

In ‘Mera Naam Joker’ Rishi Kapoor nurses a crush on his teacher Simi Garewal, in ‘Main Hoon Na’ Shah Rukh nurses a crush on his professor Sushmita Sen. In ‘Dil Chahta Hain’ all three heroes remember their teacher. The new millennium introduced many faces of the teacher - the stern principal of ‘Mohabbatein’ who inculcated the value of tradition. The defamed foot ball coach of ‘Chak De’ who inspires admiration. Who can forget the compassionate teacher/ Aamir Khan who enlightens the parents in ‘Taare Zameen Par’ or who gives them a free hand to study their passion in ‘3 Idiots?’ In ‘Stanley ka Dabba’ we saw a greedy teacher eating up Tiffin boxes of little children. In ‘Iqbaal,’ ‘Paan Singh Tommar’ and ‘Bhaag Milkha Bhaag’ we were introduced to selfless coaches who led their gifted students Shreyas Talopade/ Irfaan Khan/ Farhan Akhtar to achievement they had never dreamed of

Prakash Jha’s ‘Arakshan’ and ‘Satyagraha’ had Amitabh Bachchan portray an idealistic teacher who will not compromise on his values. He is the voice of Mahatma Gandhi who protests corruption but remains non violent. Both these films are images of the age old guru shishya relationship in Hindi films while Karan Johar’s ‘Student of the Year’ depicted that old friends and memories stay fragrant forever.