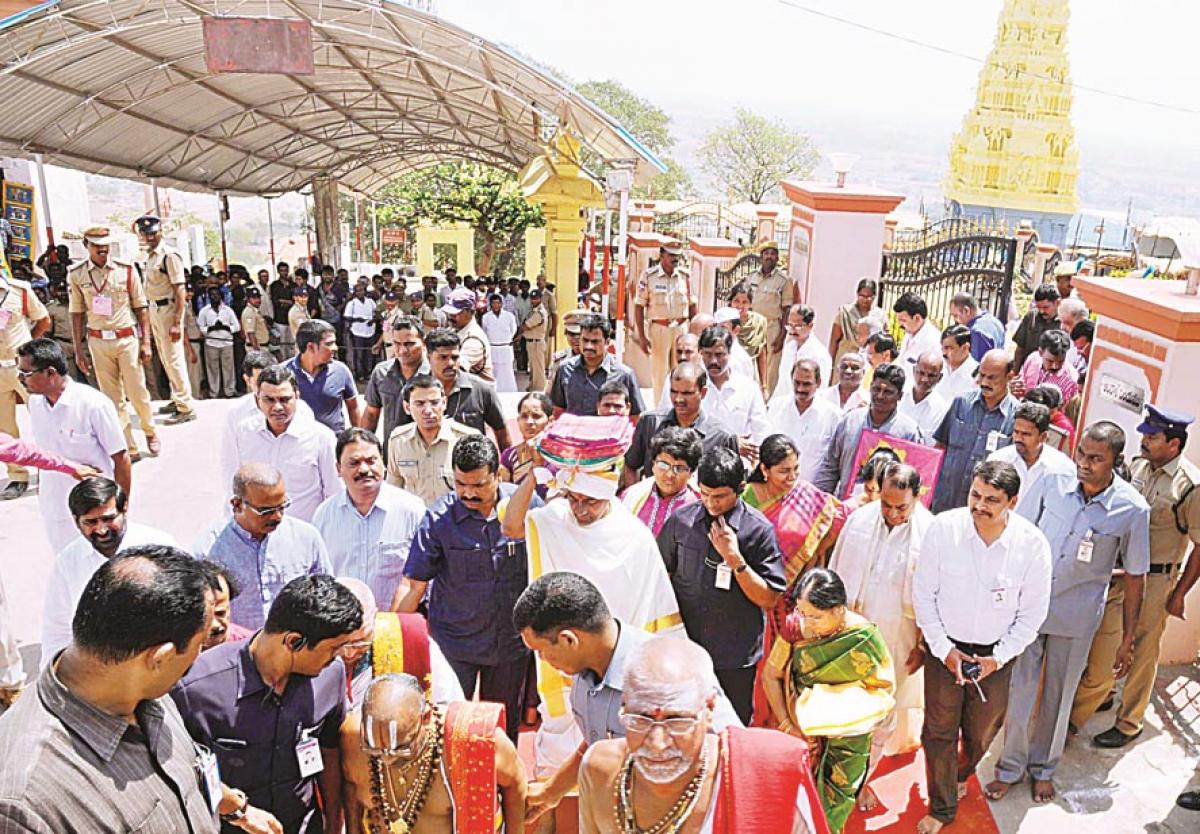 Chief Minister K. Chandrashekar Rao on Thursday presented pattu vasthrams (silk clothes) to Sri Lakshminarasimha Swamy at Yadadri for the celestial marriage of the Lord (Srivari Kalyanotsavam). The Chief Minister arrived at Vadaigudem, located near Yadagirigutta, by chopper at 11 am.

Nalgonda: Chief Minister K. Chandrashekar Rao on Thursday presented pattu vasthrams (silk clothes) to Sri Lakshminarasimha Swamy at Yadadri for the celestial marriage of the Lord (Srivari Kalyanotsavam). The Chief Minister arrived at Vadaigudem, located near Yadagirigutta, by chopper at 11 am.

Nalgonda District Collector P Satyanarayana Reddy, Superintendent of Police Vikram Jeet Duggal and others accorded a grand welcome to him at the helipad. He proceeded to Sri Lakshminarasimha Swamy temple atop Yadadri hill by road. Minister for Endowments Indrakaran Reddy, Minister for Power G Jagdish Reddy, Government Whip Gongidi Sunitha, Bhongir MP Burra Narsaiah Goud and Zilla Parishad Chairman N Balu Naik were among those who accompanied the Chief Minister to the temple.

On his arrival at the temple, the priests accorded a traditional welcome with purna khumbam to the Chief Minister. Rao, along with his wife, presented pattu vasthrams for Kalyanosthavam and participated in special poojas. Later, the temple priests blessed the couple on the occasion.

Rao has also instructed the YTDA and temple officials to discuss with the R&B department officials about the construction of shopping complex and a kalyana mandapam. He insisted that the size of kalyana mandapam should have enough space to perform 5,000 marriages at a time. It has also decided to stop the darshan at the main temple after completion of Bala Alayam where darshan facility would be provided to the devotees.

Speaking to the media after the meeting, Bhongir MP Burra Narsiah Goud informed that the Chief Minister has assured to do justice to the people who lost their shops due to demolitions at hill shrine. Shops would be allocated to them in the shopping complex which would be constructed as a part of the development of Yadadri, he added. Later, the Chief Minister left for Hyderabad by helicopter. YTDA Vice-Chairman G Kishan Rao, Temple Executive Officer N Geetha and others were also present.