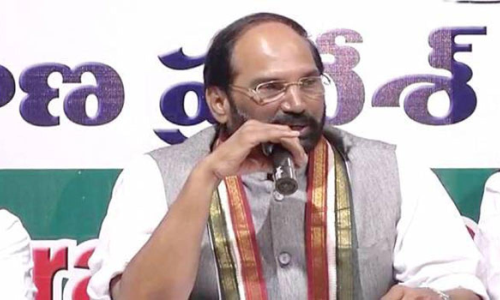 Stating that the BJP has lacked strength in the State, Uttam Kumar Reddy felt that the BJP was under illusion that it would gain Hindu vote in the State. The ruling party has already got into election mode.In a chit-chat with journalists at Gandhi Bhavan, the TPCC chief said the State Intelligence sleuths were telling Chief Minister K Chandrashekar Rao what the latter liked.

The Ministers and MLAs had no courage to tell the Chief Minister the ground realities. Farmers were increasingly taking part in agitations voluntarily. The government, which dubbed the persons who participated in agitations were rowdies and not farmers, should ponder over their statements, he said. Uttam Kumar Reddy wondered whether the Chief Minister was aware of the simmering anger among the chilli farmers and it erupted into violence in the Khammam Market Yard.

The Chief Minister had advised farmers to go in for chilli and red gram crop, but failed to come to their rescue when the price for the chilli crashed, he pointed out. By ordering the arrest of farmers, the Chief Minister was transforming the State into a police state, he said. He said the Congress party’s membership drive would be completed by May 15. He said he would give PowerPoint presentation on Kaleswaram project very soon.