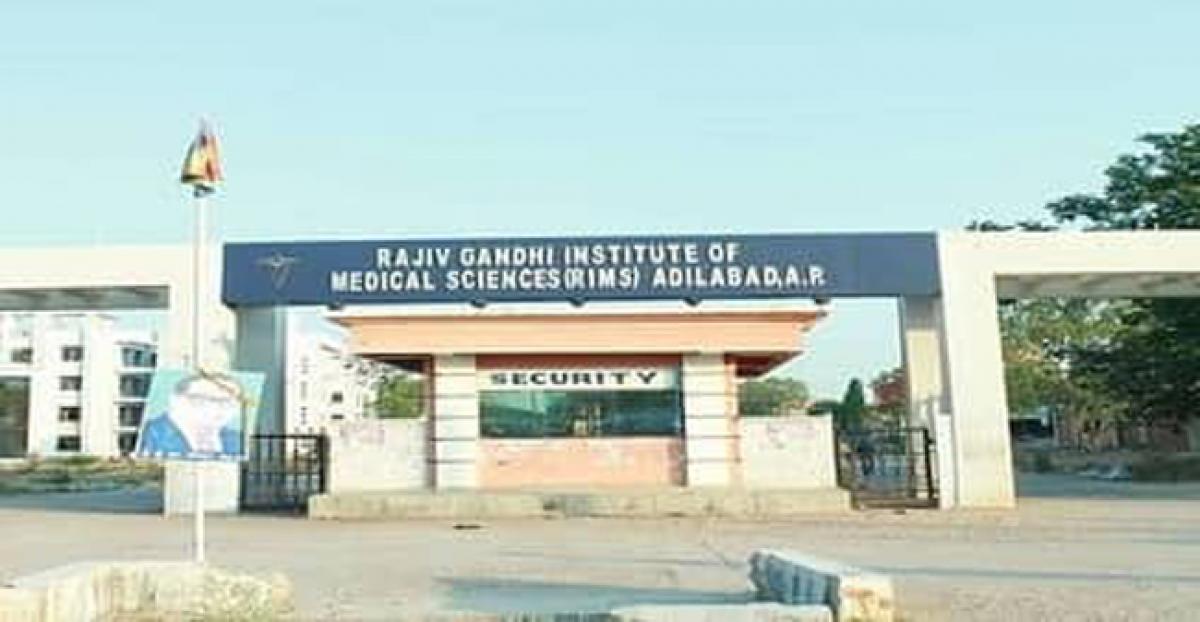 Facing threat of losing recognition, Rajiv Gandhi Institute of Medical Sciences RIMS, Adilabad will be offering plum pay packages to teaching staff that will be recruited in next three weeks

Hyderabad: Facing threat of losing recognition, Rajiv Gandhi Institute of Medical Sciences (RIMS), Adilabad will be offering plum pay packages to teaching staff that will be recruited in next three weeks.

As per the fresh decision, professor would be given a consolidated pay package of Rs 1.9 lakh per month while for associate professor it would be Rs 1.5 lakh and assistant professor Rs 1.25 lakh.

RIMS-Adilabad, which is a semi-autonomous institution, will be taking steps in co-ordination with district Collector, to issue a notification and call for applications for the 40-odd vacant posts. MCI team that visited college on June 6 for renewing recognition, given for every 5 years, highlighted staff deficiency in its report and kept the renewal decision pending necessitating the government to take a key decision on increasing pay.

According to senior doctors working in Hyderabad, staff vacancies in Adilabad college has been a problem because teaching faculty were reluctant to move to far-off Adilabad district. Lack of opportunities for children’s education and fewer facilities in the backward Telangana district were main reasons why doctors shied away from responding to job notifications taken up by RIMS in the past.

Expressing another point of view, Telangana Junior Doctors’ Association members from RIMS said that earlier notifications by RIMS were mostly contract based and hence lukewarm response from doctors’ fraternity from taking up teaching posts.“RIMS being a semi-autonomous institution, posts are being filled on contract basis unlike in government medical colleges where recruitment is permanent.

In such a scenario, why would senior teaching faculty sacrifice everything and show interest to come to Adilabad for a job that is temporary and at the mercy of college administration. Also, the pay package was not encouraging," said a junior doctor.

"RIMS will be issuing a nationwide notification paving way for doctors from other states also to apply apart from Telangana. The teaching and patient care will be on required standards once appointments are made," he said, adding that other small deficiencies pertaining to modification of wards etc. would be done at the earliest.

Dr K Ashok, Director, RIMS, said that job notification was likely to be issued in newspapers on August 16 after consultation with district Collector.
In all 14 professor posts, 10 associate professor posts, 15 assistant professor posts and five tutors’ posts would be filled, most likely, by end of August. MCI re-inspection is expected in September after which recognition renewal decision would be announced, the director added.

Meanwhile, sources stated that reason for all-India notification was to give opportunity for doctors from other states to apply in view of reluctance shown by teaching fraternity from Telangana.

A few doctors from bordering Maharashtra already worked here in the college in the past and there are good chances of receiving applications from the neighboring state this time, said a junior doctor.