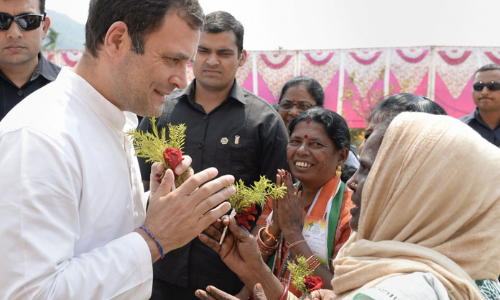 Hyderabad: Congress party is making all-out arrangements for what is billed as a major event where AICC president Rahul Gandhi who will blow the poll bugle and address booth-level Congress workers on Saturday.Rahul Gandhi is expected to announce the modalities of minimum income guarantee scheme and is likely to give a broad outline of the party’s poll promises.

While he would continue his attack on the central government and the Rafale deal and reiterate how chowkidar had allowed theft of even defence documents to take place, it remains to be seen what stand he would adopt with regard to the TRS government here. TPCC president N Uttam Kumar Reddy and incharge of state affairs RC Khuntia and other leaders visited the Classic Convention hall at Shamshabad on Friday and examined the arrangements.

Party leaders said that they have been planning to bring as many as 3 lakh common people and party workers for the public meeting. About one lakh would be gathered from Chevella Parliamentary Constituency, one lakh from the surroundings of Hyderabad and another one lakh from all over the state.

Uttam Kumar held a tele-conference with about 30,000 party functionaries and told them to mobilise as many people as possible for the public meeting. According to the schedule received by the PCC, Rahul would arrive from Bengaluru at Shamsha- bad International Airport at 4.10 pm and will reach the venue at around 5 pm.