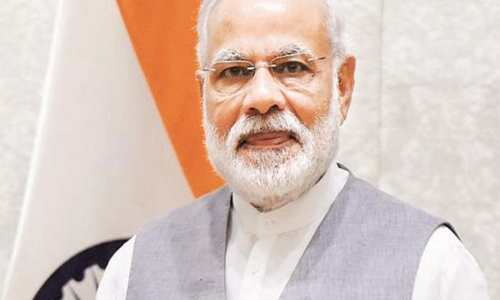 Hyderabad: A group individuals with aim to highlight the developmental initiatives and welfare schemes of Prime Minister Narendra Modi’s government in the last five years launched the Modi army here on Friday. Addressing media, BJP leader Gajjala Yoganand, Arun Luharika, Suresh Chandrasekhar and Suresh Kochattil and Sanjay Thumma said the self-drive group decided to spread awareness about the good work delivered by the Prime Minister and his government at the centre.

As part of the awareness programmes planned, they said a ‘Run for Modi’ will be organised on March 17 at Necklace Road in the city. That apart, the group has also launched a website telanganaformodi.com besides, launching of a social media campaign of 21 handles, they said.
Suresh Chandrasekhar, a chartered accountant by profession said that the ensuing election in 2019 is not for Telangana but for the entire country.

“When the country is good then every State in it will be good,” he said. Terming that the spirit with which Modi is working for the last five years has become a talk of the town and people from across different countries now want a leader like Modi in their country, he added.There is a responsibility cast upon the people of Telangana to vote for a right leader, MJ Sridhar said politics are not a private property of anyone or few families, they are a means to serve the people of the country and its future generations.

Yogananda said those who remained undecided on the issue of politics too are increasingly expressing their support to Narendra Modi, after seeing his five-year-long work for the country and the commitment with which he worked to fortify the security and safety of the country.The speakers said that their sole intention is to create awareness about the Modi's government and to bring him back to power.

They said Modi Army will work above political lines and only create awareness about the good work carried by the Prime Minister. As part of this, the group will also create a website for every parliament segment in Telangana to inform citizens as to what was done to them by the Centre. Those who want political stability can join the Modi Army, they said. Earlier, Yoganand released the logo of "Telangana for Modi.’