The harpist and the princess 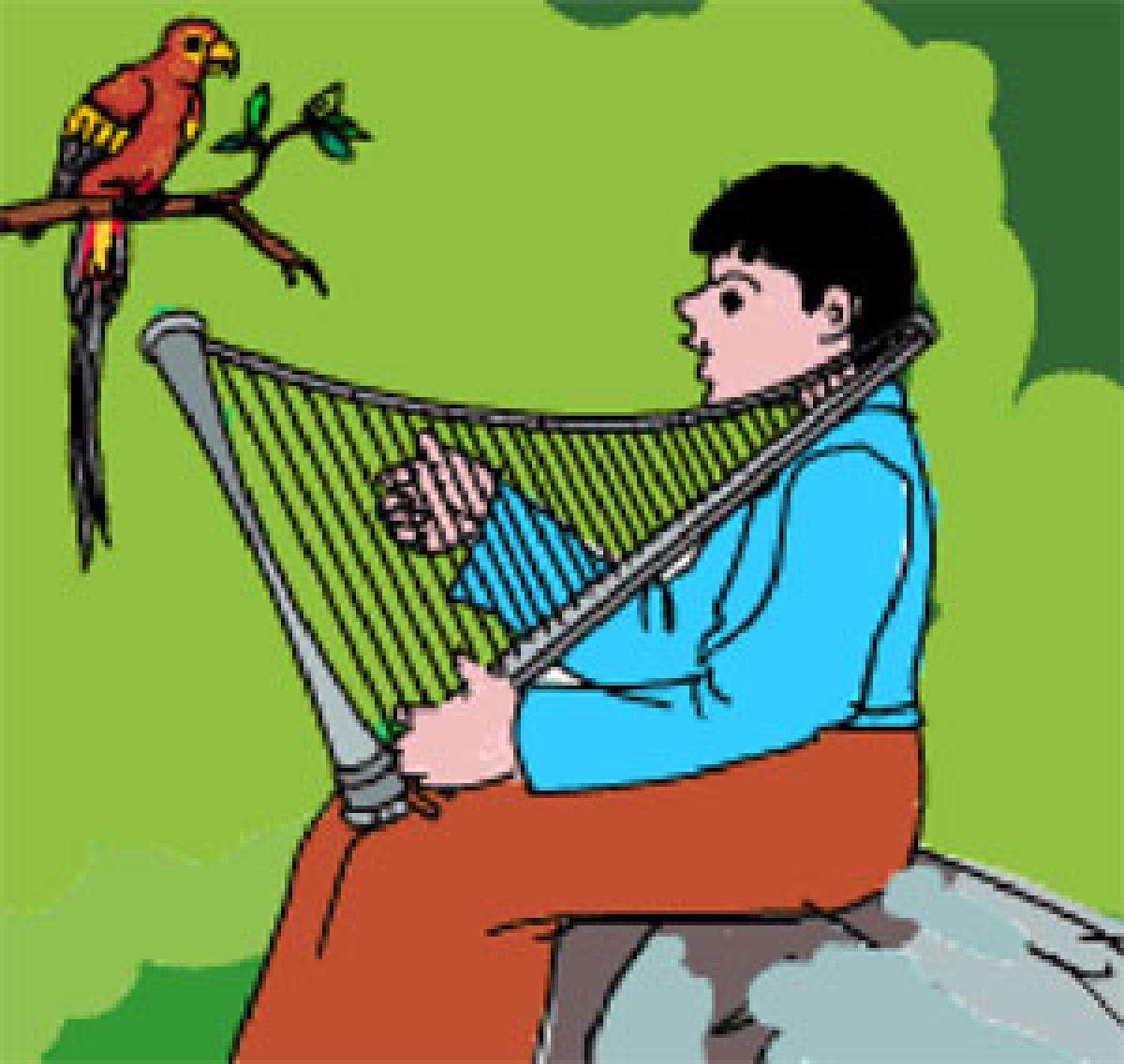 Once upon a time in the beautiful city of Mandalay lived a young orphan boy. His name was Thi Hah. He was very poor and often had to go without food.

Once upon a time in the beautiful city of Mandalay lived a young orphan boy. His name was Thi Hah. He was very poor and often had to go without food.

He had one passion in life, and that was playing the harp. The Burmese harp resembles a long tailed boat with a thick bottom and its end tapers to a fine delicate end very like the sails of a boat.

Thi Hah loved to play, for when he played; he would forget he was hungry or that there was nobody in the world to love him. But unknown to the orphan boy, the birds and anmals would listen with rapt attention.

His music was carried by the wind and people would stop what they were doing to listen to his music. Everyone in Mandalay said there was no one who could play the harp as well as Thi Hah...

Jealous ofThi Hah’s growing fame, a magician The Shwe, who wanted his son to become a famous harpist, cast an evil spell on Thi Hah. His skin became grey and full of sores. The magician made only one concession, Thi Hah he said, would be miraculously cured if a princess called him her Maestro.

As the disease spread to his fingers Thi Hah left the village in shame and started living in a forest. There he would play his harp and console himself. And when he played, he would forget all his worries and feel at peace.

One day, a beautiful princess named Yi Yi and her friends came out for a hunt and camped in the forest. That night as they sat around their fire they heard the beautiful sounds of the harp.

Everyone was mesmerised by the melodious sound but they could not see the harpist. Mystified, the princess ordered her soldiers to find the person who played such soul stirring music. The soldiers set off on horseback and combed the forest thoroughly.

Finally, they came across Thi Hah sitting on a sandy mound, playing in utter abandonment. When he stopped playing, the guard approached him.

Thi Hah tried to pull on his robes to hide his ugliness. In the bright moonlight, the guard captain saw the sores on Thi Hah’s body and stepped back to put some distance between them.

“The princess calls for you,” he told Thi Hah.

“I can’t go before her like this.” The captain nodded.

“We can help you cover yourself completely with a robe, but the princess must be obeyed.”

So Thi Hah rode out with the captain wearing a heavy hooded robe. He wore gloves on his hands with his face shadowed by the hood.

When the princess saw him, she was intrigued by his masked appearance. She asked him to play.

Thi Hah played to a rapt audience. Moved by his music, Princess Yi Yi asked him to teach her the harp.

Thi Hah agreed and he accompanied the hunting party to the royal palace. There he began teaching the princess how to play the harp.

The princess was a diligent student and soon she was playing beautifully. Everyone was full of praise for her. Even her parents, the king and queen, told her that she played like an angel.

As her fame grew, Princess Yi Yi became very proud. One day she announced to her father, the King, “Father make an announcement inviting all famous harpists and princes from all over the kingdom and neighbouring countries. I want to compete with the best harpist. I will marry the man who can play the harp better than me.”

The King was very happy as for a long time he and the Queen had been trying to arrange a match for Yi Yi but she had always refused concentrating on her music instead.

People came from allover to Mandalay. There was a huge reception, well known harpists and handsome princes well versed with playing the harp, gathered in a public hall to match their talent against the princess.

They had all heard ofPrincess Yi Yi’s beauty and extraordinary talent with the harp. One by one they played, but no one could play better than the princess. The public judged the contest and voted for the Princess again and again over the other harpists.

One by one the suitors lost and left disappointed. The princess was thrilled with her talent. When she had beaten the last man, she raised her arms to a standing ovation, the public acknowledged her talent.

Then suddenly sweet melodious notes of a harp filled the air and people stopped to hear in rapt attention. The Princess picked up her harp and also started playing sure that she would beat the new contestant.

She was very puzzled as she could not see the harpist but could only hear the clear beautiful notes. On and on they played, the harpist picked up difficult notes and the Princess followed suit, but one by one her harp strings broke.

When she could not play any longer, she stood in anger and frustration as the public sat holding their collective breath to the crystal clear sweet notes of the harpist.

Confused as who could be playing such beautiful music, the princess started walking towards the sound of the harp. She came across her masked teacher who was playing engrossed in his music.

She sat down and closed her eyes; the music was like nothing she had ever heard before. It was like the playful brook, the mist as it plays hide and seek and the sweet fragrant breeze that starts when dawn breaks over the horizon.

She looked up as the sound of the harp ended. “You are my maestro,” she cried and held Thi Hah’s gloved hand and kissed it.

No sooner had she said that, she cried out in surprise for instead of a masked man there stood a handsome smiling youth, Thi Hah, whose spell had broken as the princess had called him her maestro.

Princess Yi Yi had succeeded in breaking the curse on Thi Hah. They were both married and lived happily ever after.