The fox and the goat 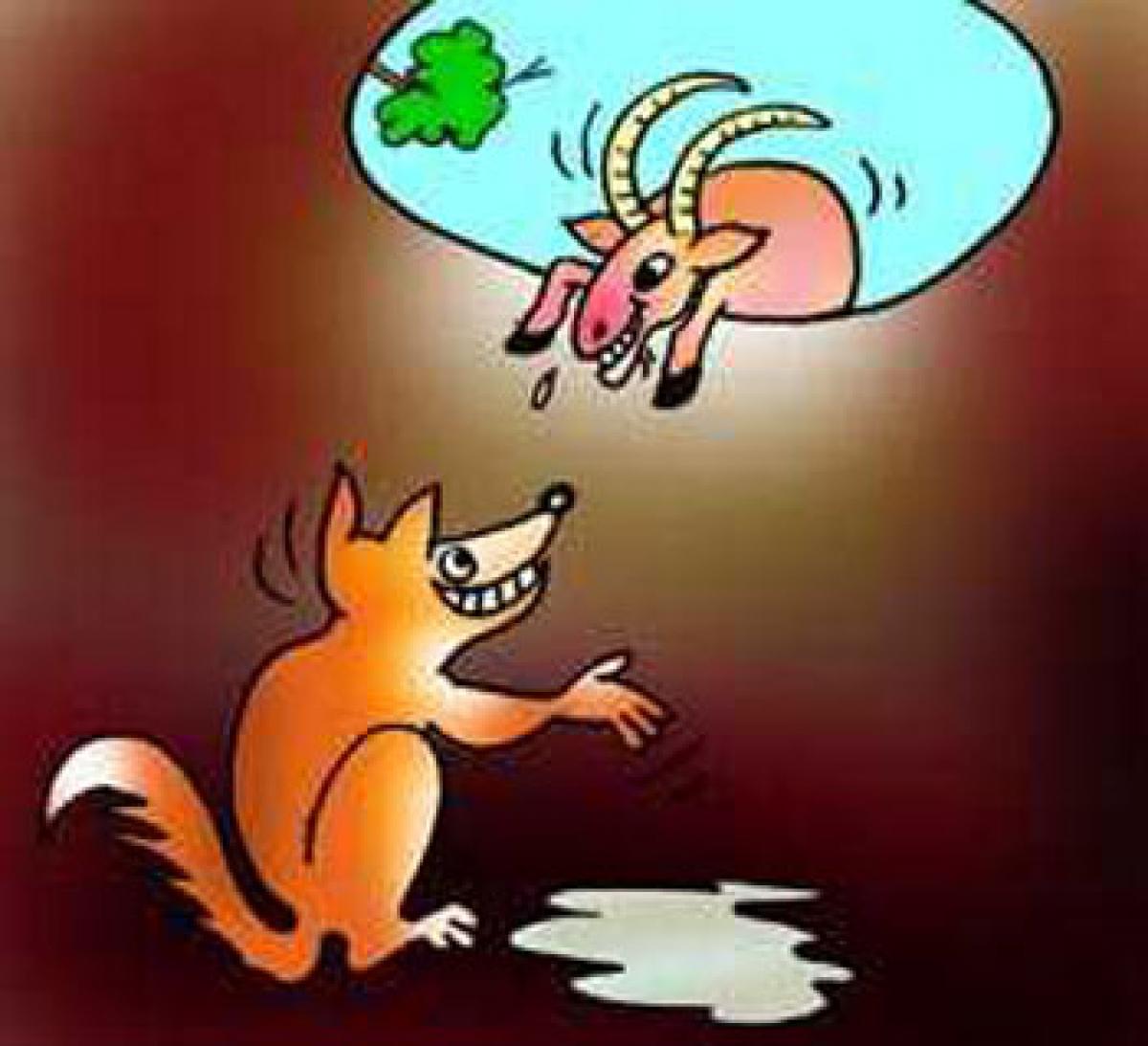 Dabbu the fox was in a happy frame of mind. He had just made a hearty meal of the remains at King Lion’s den after the great king had gone out for a stroll. The meal had been fresh deer and it was smacking good. If only luck like this shone upon him every day, thought Dabbu.

Dabbu the fox was in a happy frame of mind. He had just made a hearty meal of the remains at King Lion’s den after the great king had gone out for a stroll. The meal had been fresh deer and it was smacking good. If only luck like this shone upon him every day, thought Dabbu.

Thinking such thoughts, Dabbu looked up at the clear sky and began to sing as he walked. He had watched Hindi film heroes do that when they were happy. This mainly happened when they were in love.

Dabbu wasn’t in love, at least not yet. Still, in his opinion, the emotional response that a good meal evoked was equal to the feelings that deep love brought about. It brought tears to the eyes, sometimes – it was such a fantastic experience.

He opened his mouth a little wider to let out another outburst of song, and promptly found himself falling. Dhum, dhum, dhum…

Dabbu had fallen into a shallow well. A wide-mouthed well which he had passed thousands of times in the past and which he’d never have missed seeing if he hadn’t been acting like an idiot. So angry was Dabbu with himself that he wanted to kick himself again and again. But first, he had to get out of this infernal hole. Thank god, there wasn’t much water in it.

So he tried and tried and tried to get out of the well. But he failed. Though not deep, the well had moldy, slippery walls. Dabbu could not get a firm grip on them. He gave up after several attempts and sat panting. The food had made him somewhat heavy too.

“What are you doing inside the well?” Dabbu suddenly heard the surprised squeal from above. He looked up to find Laadla the goat, staring down at him. Laadla was a young and ( in Dabbu’s opinion ) gullible goat. Not only did he have a squeal for a voice, he also asked the most irritating questions with it. To the worldly-wise Dabbu, Laadla’s ignorance was absolutely unbearable.

But he wasn’t going to let Laadla know that of course. He wasn’t a fox for nothing. So in his deepest voice he said, “Haven’t you heard dear Laadla? Kancharam crow had come to visit me in the morning. He has heard that the Gujarat drought, which he has seen with his own eyes, is going to spread to our beloved Bihar too (Bihar’s Laltara jungles was where they lived). I’m not taking any chances.

So I’ve jumped down here to be sure to have some water by me. Why don’t you come down too?” “A drought, how terrible. Yes, yes… I’m coming down,” mumbled the scared Laadla before jumping into the well. As soon as he did so Dabbu jumped on his back, and by putting his horns on his long horns managed to jump up to the edge of the well.

“You silly creature, this is what happens if you don’t read the newspapers. There are floods all over the north and north-eastern part of our country but you believed my story about there being a drought. Since you can’t be a frog in the well, be a goat in the well.” Is it my fault if I have a trusting nature? bleated Laadla.