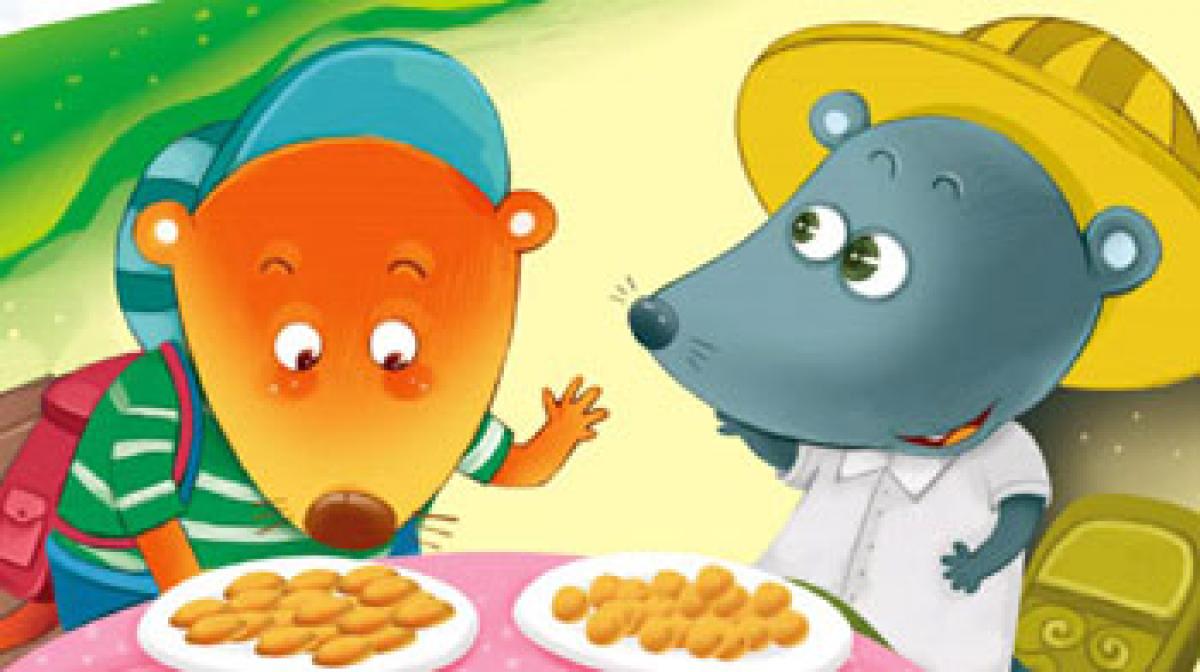 A town mouse and a country mouse were cousins. Now, as it usually happens in such cases, the attire and mannerisms of the two cousins reflected where they lived. But they were fond of each other.

A town mouse and a country mouse were cousins. Now, as it usually happens in such cases, the attire and mannerisms of the two cousins reflected where they lived. But they were fond of each other.

While the town mouse was a natty-dresser, a little brisk in her movements, and always in a hurry, the country mouse was the proverbial bumpkin, with her slow unhurried ways and manner. But this factor didn’t affect their friendship. The town mouse visited the country mouse often, and stayed with her in her little house next to the kitchen that belonged to the village school.

“I need your company and the fresh air,” she explained as if to justify why she came so often. The country mouse, a friendly sort, was only too happy to accommodate her cousin.

One day the town mouse visited her cousin and was heartily welcomed. The country mouse offered her the leftovers of the meal that the village school kids had had – beans and bacon, bread and cheese. But it was country stuff and a little too rough to taste. “I cannot understand you cousin” cried the town mouse, “how you can put up with such poor food like this? I’ve never been able to stomach this food. Of course you cannot expect much better in the country.

Why don’t you come with me for a week and I will show you how town folk live? A few days there, and you’ll wonder how you ever stood a country life.” The country mouse agreed to this suggestion and the two set-off for the town. They arrived at the town mouse’s residence late at night. “Some refreshment, dear cousin?” asked the town mouse, a very polite host. The other nodded. Yes, it had been a trying journey.

The town mouse lived in the huge house of a rich family. Naturally, the living arrangements were superior to anything her cousin had ever seen. The dining room was so grand and impressive that it absolutely took her breath away. And the food! There was so much food left over on the table that the mice had little room to stand. Jellies and cake, cookies and meat-cuts, ice-cream… why, this was a feast fit for the gods.

“Isn’t it heavenly?” asked the town mouse to her now speechless country cousin. The other could only nod. They buried themselves in the rich food and began to eat.

Suddenly there was a loud commotion outside the dining room. To the country mouse, it sounded very much like growling and howling.

“What was that?” asked the frightened country mouse. Fancy hearing a thing like that at dinner?

“It’s only the dogs!” said the rather unperturbed town mouse. Years of living in the town had made her reflexes very sharp and she knew what she had to do in the face of danger.

“Only?” cried the visibly agitated country cousin. “I don’t like to hear such music during my dinner.”

At that very moment the door flew open and two terrifying dogs came bounding in. They came straight at the table. The terrified mice quickly scampered down and ran for their lives, their tails tucked behind them.

“Goodbye cousin,” said the country mouse in the safety of her cousin’s room.

“What? You’re not leaving so early are you?” remarked the astonished town mouse. “Yes” the country mouse replied, “I’d much rather have the rough country-fare and live in peace than gulp down rich cake and meat in fear.”

And with that she left for her abode in the country.