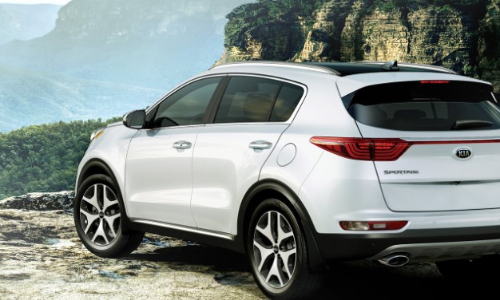 Kia Motors unveiled the teaser for the muchawaited 2019 Kia Sportage

Kia Motors unveiled the teaser for the much-awaited 2019 Kia Sportage by the end of December, before 2018 came to an end. This teaser marks the entry of the Kia Motors in the Indian market. Kia plans on beginning its innings in Indian market with the crossover SUV based on the KIA SP concept. The production version of the SP will sit on the platform derived from the Hyundai Creta. The debut in India will take place around May 2019 but has already been spied undergoing tests. Though, the brand is not entirely new as Kia motors is a group company of the South Korean giant, Hyundai. So, we can safely say that more or less it knows the Indian market.

Now, coming back to the teaser. Kia has portrayed its brand to be energetic and youthful. The teaser is in sync with that and is quite offbeat. It features a Kia Sportage placed on a revolving platform with an astronaut floating around it. The Kia Sportage has already received a facelift worldwide and the teaser teases this very model. This model is of the international specification and we might expect some changes when it is launched in the Indian market to suit the domestic landscape. Judging from the teaser one can say that many more SUVs are to be brought to the Indian market by Kia.

Right from the beginning, Kia seems to be maintaining a belligerent tone. It will be launching a new vehicle every six months after its first launch. With this pace, it will be having a range of vehicles in different sections.

Earlier last year, Kia has announced to set up a 536 acres plant in Andhra Pradesh. The plant will be having facilities for stamping, welding, assembly, and painting. It will cater to the demands arising from both domestic and international markets. The factory will be in Anantapur district and the company has already signed an MoU with the Andhra Pradesh Government for the same. The annual capacity of the factory will be around 3 lakhs. Kia Motors will be investing around 1.1 billion dollars in India.

At the auto, Expo Kia has already received a positive response when it showed the entire range of its worldwide portfolio.

Marking its entry into Indian territory through Kia Sportage sounds like a good decision. This SUV has impressed one and all. It has a spacious and upscale cabin, has agile handling and offers a smooth ride. The infotainment system and other tech features are user-friendly. With engaging driving dynamics and offbeat exteriors, this compact crossover stands out among others in the class. With an international availability of three trim levels LX, EX and SX, you will be having a wider range of option to choose from. This SUV will certainly attract those who prefer safety above other specifications. The IIHS named it a Top Safety Pick for 2018. Automated emergency braking, lane-departure warning, and blind-spot monitor are some of the prominent safety features.

The major competitors of Kia Sportage have been Hyundai Tucson, Mazda CX-5, Toyota RAV4, and others. In India, it might be fighting with some other competitors. But, one way or another it certainly will find a user base in India.

Moreover, Kia motors are known for manufacturing practical and sensible cars (mostly designed for city commutes) ranging from small hatchbacks to premium vehicles. If their expertise is matched with apt pricing and specifications, then there might be something jubilant for both the users and Kia motors in India.