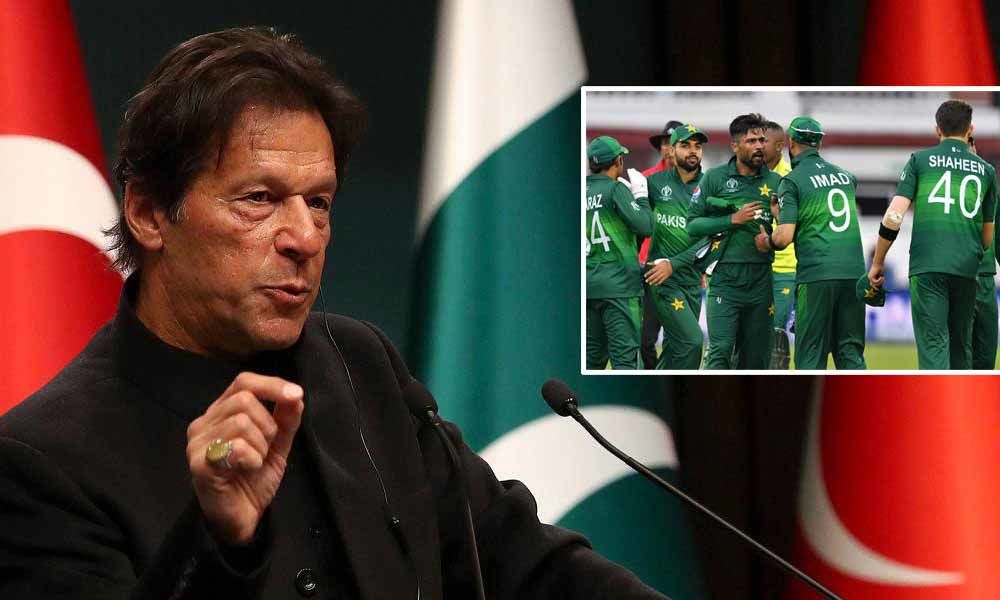 After their loss to arch-rivals India, under-fire Pakistan dished out superlative performances to beat South Africa and New Zealand to keep their semifinal hopes alive. "Congratulations to our team for a great comeback. Congratulations especially go to Babar, Haris and Shaheen for their brilliant performances," Imran wrote in his twitter handle. Imran, the only captain to have won the World Cup for Pakistan, had advised the team members before the start of the tournament to banish all fears of losing and play positively.

On Wednesday, Pakistan did just that as they overcame the unbeaten New Zealand, sending millions of cricket fans at home and abroad into celebrations. Some former players, who had lashed out at captain Sarfaraz Ahmed and the team for their poor show against India, are now praising Pakistan for their comeback. "Let's hope this comeback continues as we still need to beat Afghanistan and Bangladesh and then we can think about the knockout stage," former captain Aamir Sohail said. Sohail, who opened for Pakistan in that historic World Cup final at Melbourne in 1992, said he had high hopes from the team now because Sarfaraz was more pro-active and the players were now responding to their roles.

Former skipper Salman Butt felt that it was not a flawless performance by Pakistan against New Zealand but there is a marked improvement in the way the team is now executing its plans and adapting to the conditions. "This Pakistan team is always dangerous in such a mood. Anything can happen now. But we also need to beat Afghanistan and Bangladesh to reassert our superiority in Asia," former batsman Muhammad Yousuf said. Yousuf said that Pakistan had not played the two Asian sides very often so they need to have proper game plans to beat them. Following the win over New Zealand, cricket fans, celebrities, and media pundits have taken to the social media to draw comparisons between how Pakistan made the final of the 1992 World Cup and the current scenario.

But captain Sarfaraz made it clear after the win over New Zealand that the team was not thinking about 1992. "We are going to match by match. Whenever we are in a corner we tend to give our best as a team," he said. Former captain Rashid Latif agreed and singled out Babar Azam and Haris Sohail for their splendid knocks against New Zealand. Babar, a professed admirer of the Indian captain Virat Kohli, finished with an unbeaten 101, his 10th ODI hundred, and Sohail struck a half-century in a winning partnership. "The good thing is that the players who should form the nucleus of Pakistan cricket team for the next few years are delivering now.

I always said it is a matter of this team getting its confidence back then they can beat anyone," he said. Former test pacer Saleem Jaffer said he couldn't put a finger on this unpredictable nature of Pakistan team. "It's hard to explain and find one reason for this unpredictability. But from the start of the World Cup I have said we have a good team it is just a matter of playing well as a unit on a match day," Jaffer said. Discarded opener Khurrum Manzoor, who missed out on World Cup selection, felt that current opener Fakhar Zaman needed to play a more responsible role in future matches.

"He is a dasher, everyone knows that but in this tournament, we have seen that even someone like David Warner is grafting his innings because of the conditions and pitches and quality bowling," Manzoor said. Former wicketkeeper-batsman Moin Khan, meanwhile, pointed out that England will now face a stern test against tough opponents after their back-to-back losses. "The way I see it England are in trouble. They have lost three matches and their morale is down. They don't appear to have a plan B like Australia and some other teams to counter the varying conditions and pitches in the World Cup. It will be hard for them to beat India and New Zealand," said Moin, a member of the 1992 World Cup-winning squad.