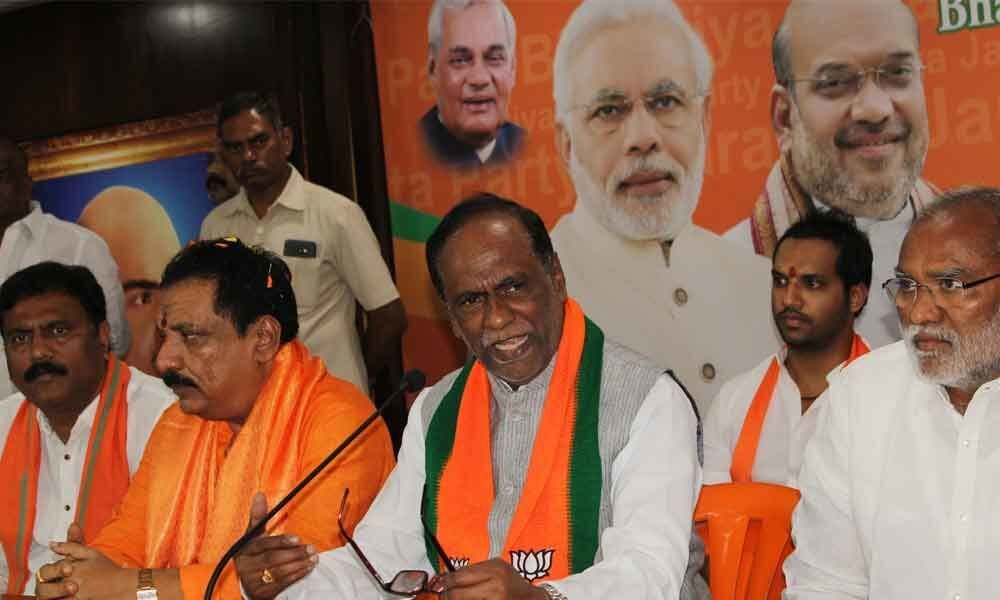 Bharatiya Janata Party (BJP) State unit president K Laxman and party national executive member Nallu Indrasena Reddy found fault with Chief Minister K Chandrashekar Rao and his government allegedly for running the show without any policy or agenda for the welfare and development of the State.

Addressing media here on Thursday, Laxman charged that the State is not providing matching grants and lands to programmes and projects sanctioned to the State. This is resulting in the project going to other States.

He said despite the Centre sanctioning funds for the railway coach factory in Warangal the State government could not show 150 acres of lands since 2016.

Similarly, the Centre had sanctioned funds for implementing housing, welfare, All India Institute of Medical Sciences, universities and other projects and schemes. However, the State government is not providing matching grants or responding in time making people of the State deprived of both the welfare benefits and development.

Laxman said, "at last K Chandrashekar Rao accepted the existing of rampant corruption, an issue which has been highlighted by the party. However, raising the issue of corruption in the Collectors' Conference, the Chief Minister is trying to throw the entire blame on the officials and administration."

Laxman said the Chief Minister stressing for comprehensive energy policy is another act of misleading people as the State is reeling under frequent power cuts due to the mismanagement of the State government.

The State has favoured purchasing power plant from India Bulls than the NTPC Super Critical Power Plant, he alleged. "Neither the power plant started and even if it starts then it will be a burden to the State," he added.

The whole situation has pushed the power plants in the State into lurch making the banks to give a negative rating to the power companies, he said.

Indrasena Reddy found fault with the Chief Minister for not giving any clarity to the policy implementation and only engaged in rhetoric time and again.