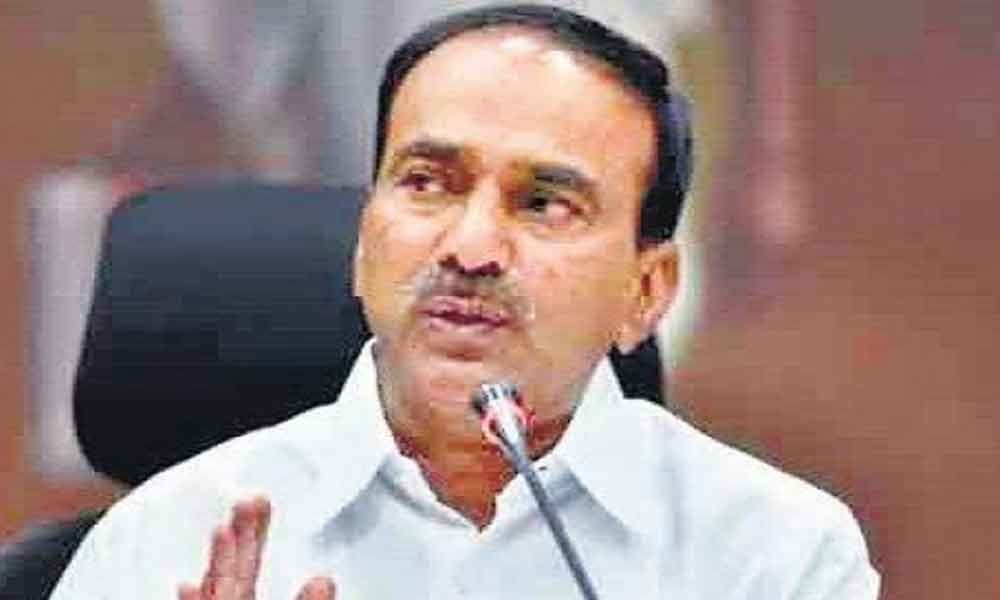 Health Minister Eatala Rajender gave vent to his anger against those who had launched a campaign against him and lashed at some of the party leaders who had joined the party after the bifurcation. His remarks have caused a sensation in political circles.

Huzurabad: Health Minister Eatala Rajender gave vent to his anger against those who had launched a campaign against him and lashed at some of the party leaders who had joined the party after the bifurcation. His remarks have caused a sensation in political circles.

In an emotional packed speech at a meeting of party leaders and workers in Karimnagar, Eatala said that he owns the TRS party flag as he had fought for separate state along with three-and-a-half crore people. He said soon it will be known who is hero and who is zero.

He said he lives with self-respect and the post of ministership was nobody's "biksha" for him. Eatala said he need not reply to the mala fide campaign against him and he was not a burnt-out candle. He said he never asked for a berth in the Council of Ministers claiming that he was a BC.

The Health minister said that he was not a person who would beg for a living.

"We are not beggars. We own the pink flag and people will soon know who the beggars are. Power may not be permanent, but 'Dharma' and justice are perpetual," said Rajender.

Lashing at a section of media for saying that he was taken into the Cabinet at the last minute in BC quota, Eatala said that his parents were not in politics and he came up on his own.

"We fought for self-respect of people of Telangana and Telangana Talli. I don't need to respond to cheap campaign against me," he added. He said that he would quit politics if anybody can prove corruption charges against him. Even if they can show that he had taken Rs 5 during his 15 years in politics, he said he would exit from political life.

It may be recalled that recently some newspapers reported that the Health Minister had leaked the government's plans to make changes in Revenue department to the some officials of Revenue department and that Chief Minister K Chandrashekar Rao was likely to drop him from the Cabinet in the reshuffle which may take place soon.

The TRS leader said that it is people who are history-makers not leaders. "People write the fate of the leaders," he said. Rajender said that he had money even when he was not a minister.

"When former chief minister Y S Rajasekhara Reddy called me in the undivided Andhra Pradesh to join Congress and there was a threat of taking away my lands if I did not join the party, he said he had told YSR to take away the land since they were purchased with his hard earned money but refused to switch loyalties.

He said that he was not afraid of malicious campaign by certain people and asked his followers to be cautious from the leaders who cannot grow on their own.