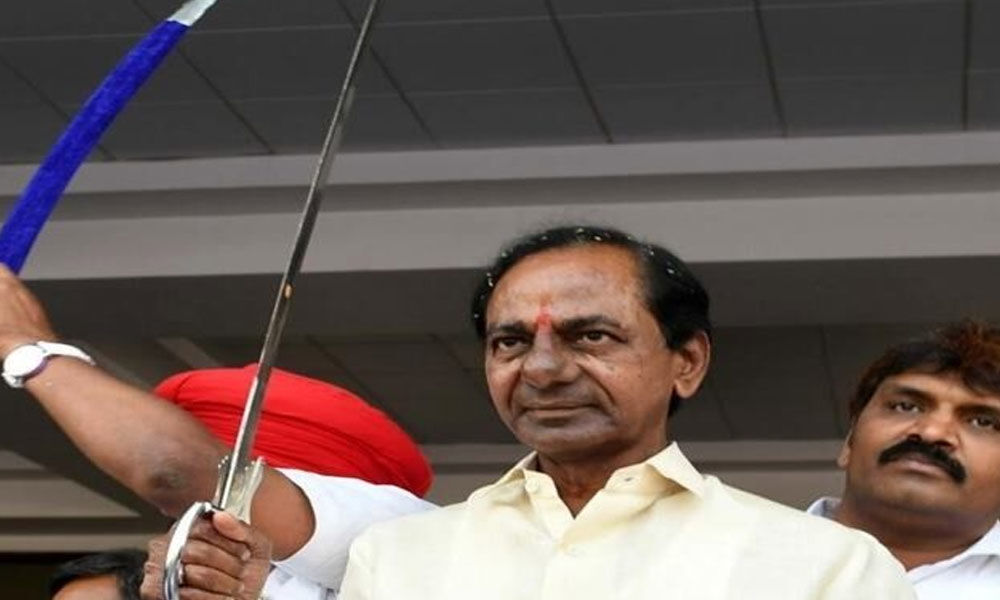 x
Sitting MPs may not figure in TRS list
Highlights

Hyderabad: Some of the sitting Members of Parliament belonging to the Telangana Rashtra Samiti (TRS) are unlikely to get tickets this time as party sup...

Hyderabad: Some of the sitting Members of Parliament belonging to the Telangana Rashtra Samiti (TRS) are unlikely to get tickets this time as party supremo Chief Minister K Chandrashekar Rao has decided to make changes in the candidature for certain constituencies, though the finalized names will be made public on Thursday.At the Nizamabad meeting, KCR said that he would release the list of candidates for the upcoming Lok Sabha elections on Thursday.

According to sources, there are changes in some of the constituencies, with some sitting MPs being denied tickets. The Chief Minister announced the candidature of B Vinod Kumar for the Karimnagar seat at a meeting in the Lok Sabha segment recently. Sources said that the party would give a second chance to some of the TRS leaders, including G Nagesh from Adilabad, K Kavitha from Nizamabad, K Prabhakar Reddy from Medak, B Narsaiah Goud from Bhongir and B B Patil from Zaheerabad.

Sources said that the Chief Minister was looking at caste equations and financially sound leaders who can manage the elections from their side, apart from support from the party. A BC leader is likely to get ticket for the Secunderabad Lok Sabha segment, given the fact that there are more Yadav and OBC voters. The party has finalised the name of T Sai Kiran Yadav for the Secunderabad Lok Sabha. Sai is son of Minister Talasani Srinivas Yadav. The name of Dande Vithal was also doing the rounds for this seat.

As for the Malkajgiri Lok Sabha, the party may give ticket to K Navin Rao. M Rajashekar Reddy's name was in the reckoning until the last minute. Similarly, for Chevella, the party is likely to field industrialist G Ranjeet Reddy, who would be facing Congress candidate Konda Vishweshwar Reddy, who was a TRS MP. The party is also likely to change the Mahabubabad, Mahabubnagar and Khammam candidates.

The name of Maloth Kavitha is being considered for Mahabubabad, denying ticket to A Sitaram Naik. Similarly, the party is changing the Mahabubnagar candidate AP Jitender Reddy. The party wants to field M Satyanarayana Reddy of MSN Laboratories. However, his family wants his brother Srinivas Reddy to contest the election.

Nama Nageshwar Rao of TDP, who joined the party and met Chief Minister K Chandrashekar Rao recently, is likely to be given the Khammam Lok Sabha ticket, denying ticket to P Srinivas Reddy. The name of V Rajendra Prasad was also bandied about. There is suspense on the Peddapally ticket, but sources said that in the last-minute decision, G Vivek may get ticket. The name of Venkatesh Netakani also figured.

Venkatesh was the Congress candidate during the 2014 election and he later joined TRS. As for Nalgonda, the party may re-nominate Rythu Samanvaya Samithi chairman Gutha Sukhender Reddy. Although his name was not among the list of probable candidates, the party had to take this decision after Congress made TPCC chief N Uttam Kumar Reddy their candidate.

In the case of Nagarkurnool, the party has decided to make former minister P Ramulu as the candidate. About Warangal, two names are doing the rounds, including sitting MP Pasunuri Dayakar and former minister Kadiyam Srihari.