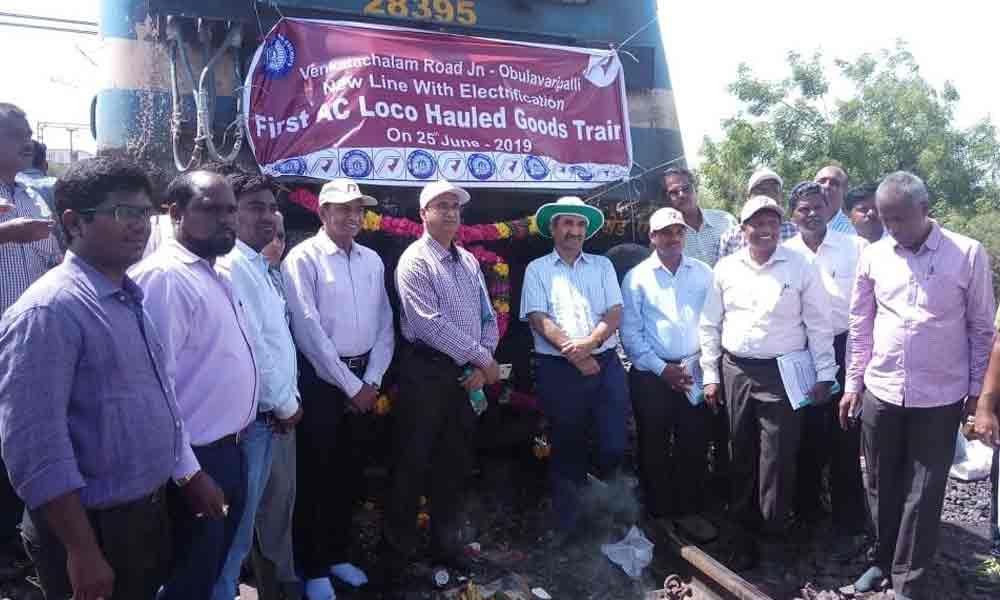 Nellore: South Central Railway (SCR) operated the first freight train on Tuesday hauled by electric traction power between Venkatachalam Road Junction and Obulavaripalle. It may be recalled that a test run with a locomotive goods train was conducted on June 15.

Now, the SCR officials have completed electric traction works and ran the train successfully on the Krishnapatnam-Obulavaripalle railway line. This maiden run marked the full-scale operation of the newly built electrified railway line opening up a viable rail connectivity between the port and its hinterland areas of the district.

It is expected to operationalise the section for commercial movement of freight train services shortly, according to a release. Gajanan Mallya, General Manager, SCR, expressed happiness on the occasion and exuded confidence that the freight handling strength of the zone will substantially increase based on the new rail connectivity.

The first electric goods train which ran on Tuesday was bound to Jindal Steels, Toranagallu and it took 2 hours and 17 minutes to cover the distance of 93 km from Venakatachalam Road to Obulavaripalle which signifies the potential to reduce travel time of goods trains running from the port towards the west coast by 2 to 3 hours. The rail route earlier was via Gudur, Renigunta and Koduru which was consuming huge time.

The Railway line from Krishnapatnam port is connected to Vijayawada-Gudur mainline at Venkatachalam station and is a busy and over-saturated section with continuous movement of passenger and freight trains towards Chennai and down South, from the East and the North.

To decongest the section for seamless movement of freight trains towards Mumbai and West coast area, a new line project from Venkatachalam to Obulavaripalle was envisaged, to provide a midway connectivity between Chennai-Howrah (Venakatachalam) and Chennai-Mumbai (Obulavaripalle) rail routes, thereby considerably reducing distance and running time.