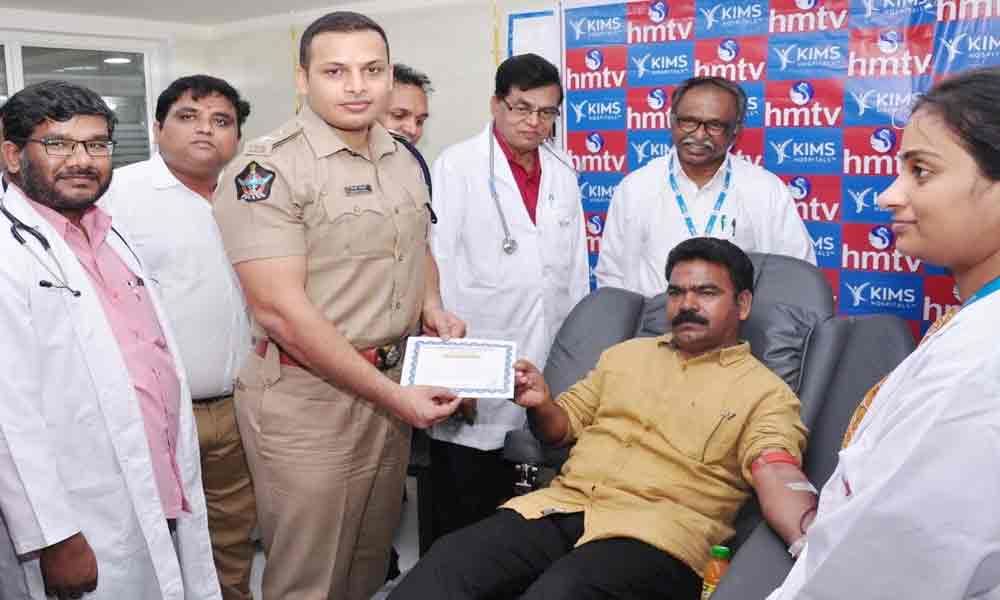 HMTV news channel in association with KIMS Hospital in Ongole celebrated the World Blood Donation Day by organising a blood donation camp at the hospital here on Friday.

Speaking on the occasion, the SP appreciated the initiative of HMTV for coming forward as a responsible media organisation to save the public in need of blood and thanked the KIMS for associating with the TV channel in the great work. He said that the police department is also organising blood donation camps already in the district in association with KIMS and assured similar service-oriented programmes will be done in the future.

The HMTV staff reporter, P Siva Rajesh said that the TV channel prefers the welfare of the common man and conducts service-oriented programmes regularly. He said that the blood donation camp received great response from the public from all corners of the district and thanked them for coming forward to join hands with HMTV in saving innocent lives. He thanked the KIMS general manager SN Murthy for extending cooperation in organising blood donation camp.

Speaking about the importance of blood donation, Dr V Sindhura said that there is a real shortage of blood units in the district. She said that the public should make it a habit of donating blood not only on special occasions but at regular intervals. She said the people involved in accidents and major surgeries require blood regularly and shared that it is hard to find blood in emergencies when there is no stock or certain rare groups of blood is required.

The technical supervisor of the KIMS Blood Bank Dr Ch Vijay Bhaskar said that it requires a lot of effort and expenses for preserving blood so that it is useful for others. He said that conduct a viral screening on the blood for HIV, Hepatitis B, Malaria or any traces of other viral diseases.

He said that they could use the blood within 42 days maximum while the blood components like platelets in just 5 days, plasma, and cryoprecipitate in a year when it is stored continuously under -40 degree Celsius.

KIMS General Manager SN Murthy, who also donated blood, thanked the HMTV CEO Srinivasa Reddy for the association and motivating a large number of people to come forward and donate blood. He shared his student life experiences of his teacher Vijay Kumar at VKR College in Budhavaram, near Gannavaram in Krishna district motivating them to donate blood.

He said that though they didn't understand the importance of blood donation then, his experience in the medical field has shown him how difficult it is to get blood in some instances. He wished to continue the association with the HMTV and The Hans India in their service-oriented programmes in the future.