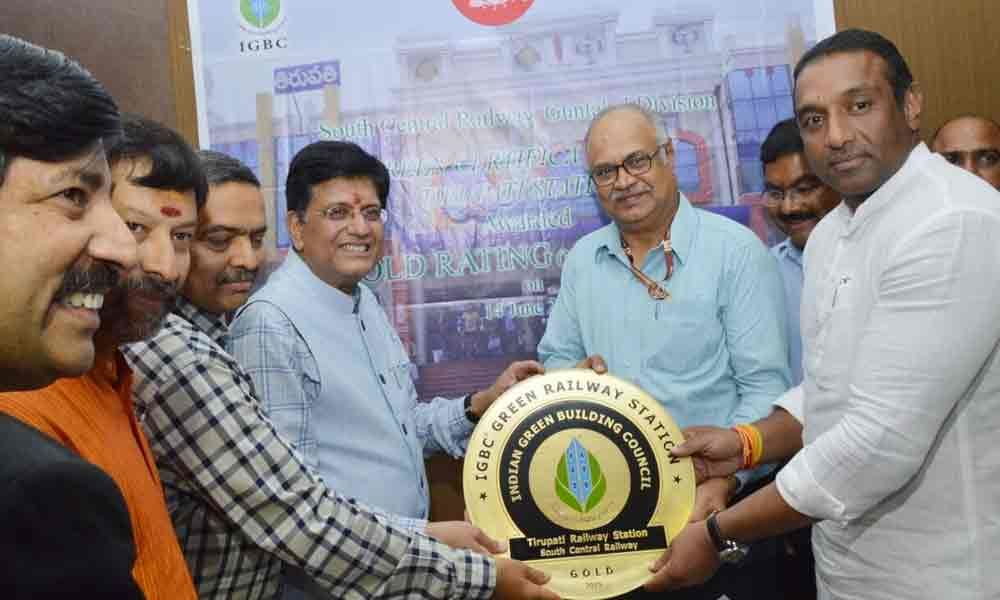 he railway station at the pilgrim city got recognition for providing better amenities and services to the passengers by the Indian Green Building Council (IGBC), Amaravati.

Tirupati: The railway station at the pilgrim city got recognition for providing better amenities and services to the passengers by the Indian Green Building Council (IGBC), Amaravati. The gold rating certificate for national excellence and memento were presented to the Minister for Railways Piyush Goyal, South Central Railway (SCR) General Manager Gajanan Mallya and Divisional Railway Manager (DRM) Vijay Prathap Singh by the representatives of IGBC and Confederation of Indian Industry (CII) here on Friday.

He went around the entire station and inspected the ongoing works with Rail Land Development Authority (RLDA) officials. He enquired about the status of developmental plans at the south side where the major portion of redevelopment has to take place and instructed them to expedite the process of executing the approved plans.

It may be recalled that the station redevelopment works with a budget of Rs 400 crore were about to take off once the tendering process is completed after which the station will become a world-class station.

The Minister suggested officials to construct a multi-storied complex on the main entrance side to provide additional facilities to pilgrim traffic visiting the abode of Lord Venkateswara. He inspected foot over bridge, waiting halls on platform number one, IRCTC maintained catering outlet where he checked the quality of food and Athithi AC premium lounge and enquired the passengers about the facilities.