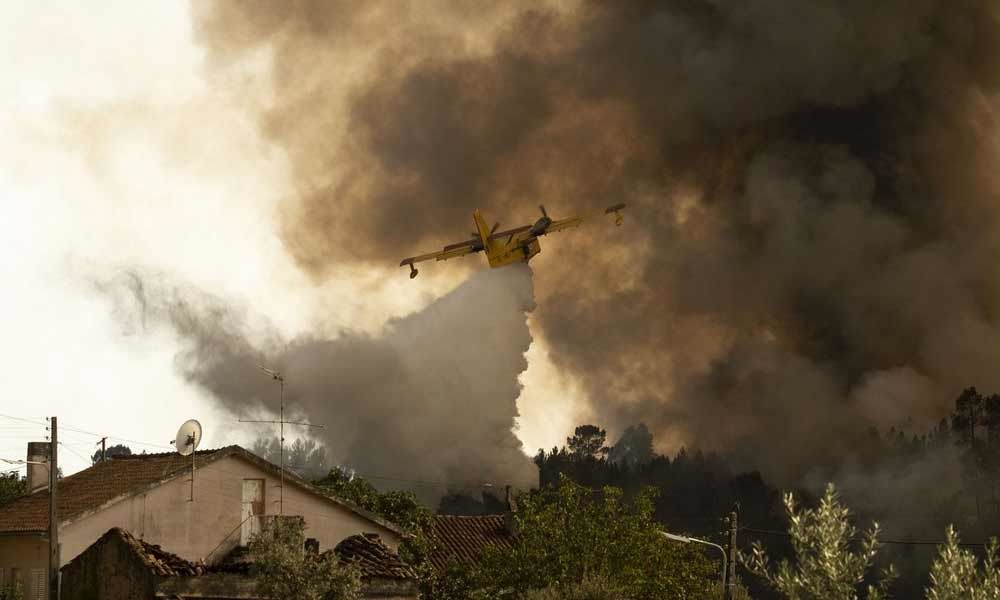 More than 1,000 firefighters and 14 water-dropping aircraft battled a major wildfire Monday amid scorching temperatures in Portugal, where forest blazes wreak destruction every summer.

As temperatures reached almost 40 C (104 F) in the afternoon, and the wind blew up, the blaze that had been largely contained overnight rekindled in some areas. Huge pillars of black smoke appeared on the horizon for a third straight day.

Officials said cooler overnight temperatures had allowed authorities to bring under control about 90% of the fire area in the Castelo Branco district, 200 kilometres (about 125 miles) northeast of the capital Lisbon.

But the Civil Protection Agency kept its firefighting assets, including 318 vehicles, in the area to move in quickly when they reignited.

The government said it had asked for help from neighbouring Spain, which was sending two water-dumping aeroplanes. They were due to arrive later Monday.

Forests in the region are tinder-dry after weeks with little rain.

The Portuguese Civil Protection Agency said the fire has injured 32 people, one seriously, as it raced through thick woodlands.

Police said they were investigating what caused the fire amid suspicions it may have been started deliberately.

High temperatures were forecast for most of the week in Portugal amid a spell of blistering whether that is due to hit northern Europe later this week.

Recent weeks have also seen major wildfires in Spain, Greece and Germany. European Union authorities have warned that wildfires are "a growing menace" across the continent.

In May, forest fires also plagued Mexico and Russia.

Huge wildfires have long been a summer fixture in Portugal.

Residents of villages and hamlets in central Portugal have grown accustomed to the summer blazes, which destroy fruit trees, olive trees and crops in the fields.

In the hamlet of Colos, 50-year-old beekeeper Antonio Pires said he had lost half of his beehives in the current wildfire. Pires sells to mainly Portuguese and German clients, but also to Brazil and China.

The country's deadliest fire season came in 2017 when at least 106 people were killed.

The average annual area charred by wildfires in Portugal between 2010 and 2016 was just over 100,000 hectares (247,000 acres). That was more than in Spain, France, Italy or Greece — countries which are significantly bigger than Portugal.

Almost 11,500 firefighters are on standby this year, most of them volunteers. Volunteers are not uncommon in fire brigades in Europe, especially in Germany where more than 90% are volunteers.

Experts and authorities have identified several factors that make Portugal so particularly vulnerable to forest blazes. Addressing some of them is a long-term challenge.

The population of the Portuguese countryside has thinned as people have moved to cities in search of a better life. That means woodland has become neglected, especially as many of those left behind are elderly, and the forest debris is fuel for wildfires.

Large areas of central and northern Portugal are covered in dense, unbroken stretches of forest on hilly terrain. A lot of forest is pine and eucalyptus trees, both of which burn fiercely.

Environmentalists have urged the government to limit the area of eucalyptus, which burns like a torch. But it is a very valuable crop for Portugal's important paper pulp industry, which last year posted sales worth 2.7 billion euros ($3 billion). The government says it is introducing restrictions gradually.

Experts say Portugal needs to develop a diversified patchwork of different tree species, some of them more fire-resistant and offering damper, shaded.

Climate change has become another challenge, bringing hotter, drier and longer summers. The peak fire season used to run from July 1 to Sept. 30. Now, it starts in June and ends in October.

After the 2017 deaths, the government introduced a raft of measures. They included using goats and bulldozers to clear woodland 10 meters (33 feet) either side of country roads. Property owners also have to clear a 50-meter (164-feet) radius around an isolated house, and 100 meters (328 feet) around a hamlet.

Emergency shelters and evacuation routes have been established at villages and hamlets. Their church bells aim to toll when a wildfire is approaching.

With 98% of blazes caused by human hand, either by accident or on purpose, officials have also been teaching people how to safely burn stubble and forest waste. Police, army and forest service patrols are also increased during the summer.