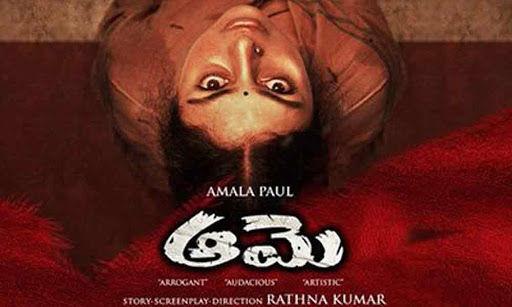 Amala Paul's new movie Aadai released yesterday in the theatres. The Telugu version of the movie, Aame released today in Telugu. The film is carrying a positive buzz on social media. The trailer hiked the expectations on the movie. Rathna Kumar is the director of the film. Read on to know the film's review.

Kamini (Amala Paul) works on a TV channel. She is a happy-go-lucky girl who loves partying. One day, she attends a birthday party of a friend and gets drunk completely. The next day, she finds herself trapped in an old building with a completely naked body. On the other side, Kamini's mother files a complaint with cops about her missing. What happened to Kamini? What happened that night? How did she end up in the building? Forms the story of the movie.

Amala Paul is definitely the show-stealer for this movie. The actress has delivered her career-best performance in this film and will definitely grab the attention of the audience. Her outstanding performance can be considered as one of the major highlights of this film. She has carried her role in an elegant and energetic way. Ramya Subramanian got a meaty role in the film and she has delivered an honest performance in the film which also added more strength for the movie. Sri Ranjani who played the role of Amala Paul's mother also delivered a decent performance in the movie. The rest of the actors also made their presence felt.

Director Ratna Kumar has prepared an interesting storyline for the film which will keep the audience stick to their chairs from the start to the end. The director has succeeded in narrating the story without making the audience get bored. His pace of narration is also really good and can be considered as one of the plus points of the film. Production values by Rambabu Kalluri and Vijay Moraveneni are lavish and added more beauty for the film. Pradeep Kumar has scored amazing tunes for this film and especially his BGM has lifted the scenes very well. Rajesh A Murthy has penned powerful dialogues for this film. Vijay Karthik Kannan's cinematography is beautiful. He has produced some colourful visuals for the film. Shafiq Muhammad Ali's editing is good.

Having a solid story is definitely one of the major plus points of this film. The movie starts off on an interesting note and the first 15 minutes of the story itself will make the audience get involved in it. The first half is somewhat slow with some comedy sequences and story of establishment but whereas the second half turns a bit racy as well as crisp. The second half is good and the unpredictable story will make the audience engaged. Amala Paul's mesmerizing performance, screenplay and BGM can be considered as the plus points of the film whereas some boring sequences in the first half will be the minus points. Overall, 'Aame' is definitely worth watching thriller.