Chhichhore Movie Review & Rating: This Sushant and Shraddha film is an account of failures scripted to win your heart 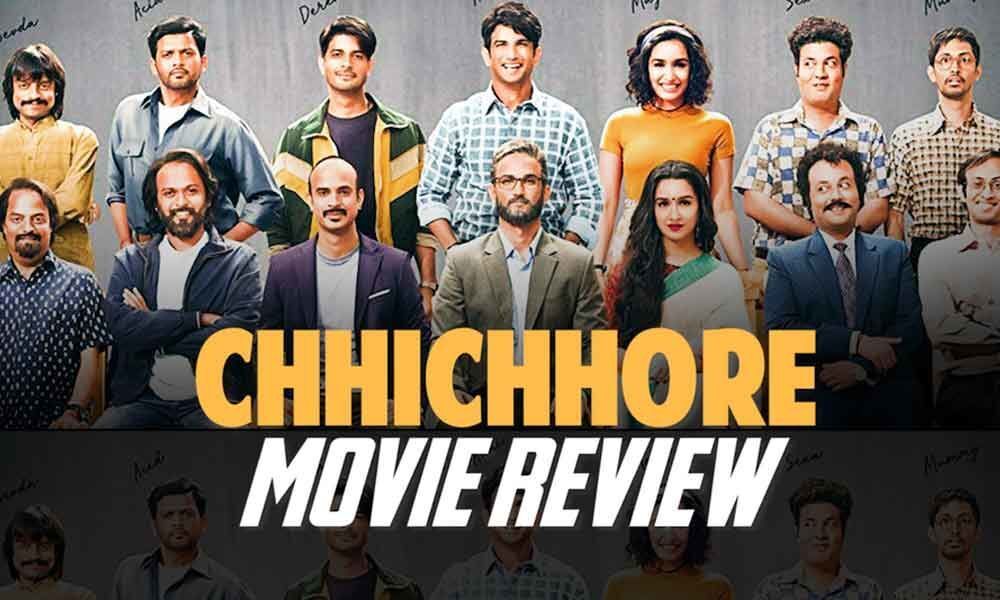 Through Chhichhore, director Nitesh Tiwari deftly teleportsthe group of spectators between the school life during the 90s, and the lives now. The authors have made a flawless showing with communicating why victors are the individuals who win as well as who don't surrender. It will help you to remember the notorious discourse of Shah Rukh Khan: Har Ke Jeetne Wale Ko Baazigar kehte hai.

The story begins as an attempt by Annirudh (Sushant Singh Rajput) and Maya (Shradha Kapoor) to spare their child Raghav who attempts suicide by succumbing to the pressure of not clearing his engineering entrance test. As he fights for his life in medical clinic, feeling unnerved at baffling his effective designer guardians, his dad attempts to energize him through an uncommon get-together with his hostel companions.

The well-crafted screenplay combined with the directorial artfulness of Nitesh offers a visit to the group of spectators to encounter the lodging life loaded up with affection, heart-breaks, appellations, awards, experiences, and misfortunes before floating back to the strained scenes at the clinic.

It takes us through the alleys of a engineering college and hostel where Anni (hypocorism for Annirudh) meets his love interest Maya. The script is ready with petrichor of nostalgia from school life. For the individuals who spent the 90s in school will take a drive through their memory paths recalling swallowing down the Zing Thing, Goldspot. The producers have chipped away at such subtleties to make the flashbacks authentic.

However it's the Platoon of myriad which leave an indelible mark in the minds of the audience. Every character has adequate screen-time to create and add to the film.

Photographs: Shraddha, Sushant, Shahid and Sonakshi among others go to Chhichhore's uncommon screening

Shraddha Kapoor and Sushant Singh Rajput's science is invigorating and keeps the 90s sentiment unadulterated. Sushant conveys another splendid presentation. He swifts through the shades of his character easily, without being dull, awkward, or plastic. Shraddha merits adulation for making Maya regular, genuine and basic for the watchers. Shraddha sets another benchmark for herself in this film.

Chucha is back and how. Chhichore likewise denotes the arrival of Varun Sharma as the current bankable-fellow for making the crowd snicker. After a progression of film that repeated his comic style and persuaded he would before long be pigeonholed, his character 'Sexa' takes hearts. He is a treat for the watchers. Prateik Babbar as Raggie makes an agreeable come back to the screen and his endeavors certainly pay off. Tahir Raj Bhasin as Derek will doubtlessly leave an effect on the group of spectators' psyche. He has attempted forceful and enthusiastic scenes with equivalent persuasiveness. Naveen Polishetty as Acid is engaging and presumably leaves us recollecting a schoolmate who was much the same as him. Tushar Pandey as Mummy adds blamelessness to his character. Saharsh Shukla as Bevda is a sweet expansion to the blend.

Without a doubt, the director has taken care of the subject with respect by not settling on a caricature ish portrayal, making both the story and the screenplay as genuine real hero of Chhichhore. Obviously, the story bend isn't totally unpredictable however figures out how to spare itself from falling into the pits of cliches. It's encouraging to see when producer Sajid Nadiadwala invests in a content that depends more on the quality of narrating as opposed to the high-octane activity successions. The satire scenes in the film make the group of spectators draw parallels with motion pictures from comparable type. Nonetheless, they are put properly and some of the time become the vehicle for underlining messages.

The best part about Chhichhore is that it's engaging, lovely, and passionate without endeavoring to lecture what it can't educate. It advises us that we have been making an age that is guaranteed rewards for progress however never instructed how to deal with a misfortune. It instructs us that frequently, achievement doesn't show you much; the disappointment supports to turn into a bunch of amassed encounters.