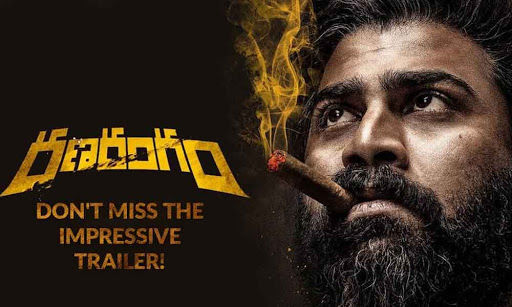 Sharwanand, Kajal Aggarwal and Kalyani Priyadarshan played the lead roles in the new movie Ranarangam. Sudheer Varma is the director of the movie. Sitara Entertainments produced the film. Touted to be a gangster drama, the movie is in the theatres from today. Check out the review of the movie here.

Deva (Sharwanand) is a small-time black ticket seller in Vizag who raises to become a gangster. What is his journey? How did he become a gangster? What happened in the end? Forms the story of the movie.

Sharwanand is truly an asset for this movie. The actor has delivered his career-best performance in this film and his energetic performance added more strength for this movie. Kajal Agarwal looked beautiful in the film and she will definitely grab the attention with her stunning performance in the movie. Kalyani Priyadarshan's role has scope for performance and she has gone under the skin of the character. Kajal is good in the film. Kalyani devlivered a decent Performance. Murali Sharma delivered an honest performance. Subbaraju justified his role. Raja and Ajay delivered decent performances. Adarsh Balakrishna is good in his role. The rest of the actors also made their presence felt.

Director Sudheer Varma picked an interesting storyline with this movie. He has succeeded in engaging the audience throughout the film. The way he has narrated the story and executed it in a decent way is really impressive. Also, his pace of narration is constant and will definitely give an interesting ride for the audience. Production values by Surya Devara Naga Vamsi under Sithara Entertainments banner are very rich. Music by Prashant Pillai can be considered as the major plus point of this film. Not only a couple of songs but also the music composed by Prashant Pillai elevated each and every emotion of the movie. Cinematography by Divakar Mani is beautiful. He has produced some captivating visuals in the movie. Editing by Naveen Nooli is clean and neat.

The entire movie runs with the Mafia and Gangster backdrop. The movie starts off on an interesting note and the entire first half will revolve around the story establishment as well as character introductions. Despite having an action backdrop, the love track between Sharwanand and Kalyani Priyadarshan is refreshing and a delight to watch. Also, the scenes between Sharwa and Kajal are showcased in a beautiful way.

Mind-blowing dialogues, screenplay, Sharwanand can be considered as the highlights of the film. However, the second half could have been more much better if the director had focused on the screenplay. Despite having a few shortcomings, the movie also has a well-executed climax. Overall, 'Ranarangam' movie is a worth watching film not only for the action lovers but also for all sections of the audience.