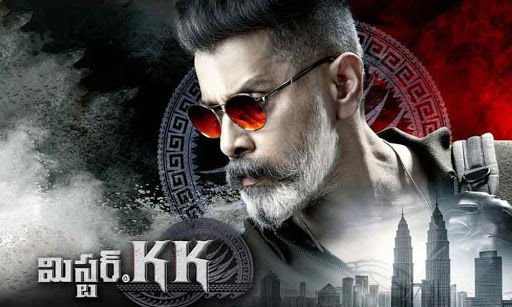 Kadaram Kondan is the new Tamil movie that released today. The film also got dubbed in Telugu with the title Mr KK. The movie stars Vikram in the lead. The trailer and posters had already left fans curious. The film unit promoted it well in both Telugu and Tamil languages. Rajesh M Selva is the director of the movie. Check out the review of the movie here.

KK (Vikram) is a dreaded criminal who is wanted by cops in Malaysia. When the cops and a greedy gangster are in a lookout for him, KK escapes from their evil plans and lands in an unexpected road accident. A junior doctor Vasu (Abi Hassan) saves the life of KK but he puts his life and his pregnant wife Aathira (Akshara Hassan)'s life in danger. Aathira gets kidnapped and they demand KK be surrendered. What happens then? What did KK do to save Aathira's life? Who won in the end? Forms the story of the movie.

Vikram is the show-stealer in the movie. For him, the role he played in the movie is a cake-walk. Though he has played roles like this in the past, he still tried to make it look stylish and different. He has got a powerful screen presence that would arrest the audiences. Everything about him in the movie is just perfect. Abi Haasan is a good actor who emoted well in the movie. He has given his best and supported Vikram's character. Akshara Haasan is a talented beauty who looked stunning in the film. She did a neat job and performed an action sequence too! The rest of the cast made their presence felt.

The visuals are looking grand in the movie. The cinematography by Srinivas R is impressive. The editing is neat and decent. The film looks racy and kudos to the editor for coming up with such an interesting cut. The music by Ghibran is outstanding and his background score elevates the movie perfectly, especially in the action sequences. The artwork is excellent and so is the production design. The stunts are amazing. The production values are lavish. The technical team delivered a great output.

The best part of the movie is the pace. The film travels at a rapid pace and makes the audiences engage in the plot. The director Rajesh Selva deserves huge appreciation for making the film so well in terms of the pace and narration. Though the director takes time to establish all the key characters, he did not miss out on maintaining a proper pace that is the major requirement for a thriller movie. Chiyan Vikram's swag sets out everything and he is a delight to watch. The film's performances are exceptional. Everyone has given their best and the movie's technical standards are on par with Hollywood. On the whole, the movie entertains big time.