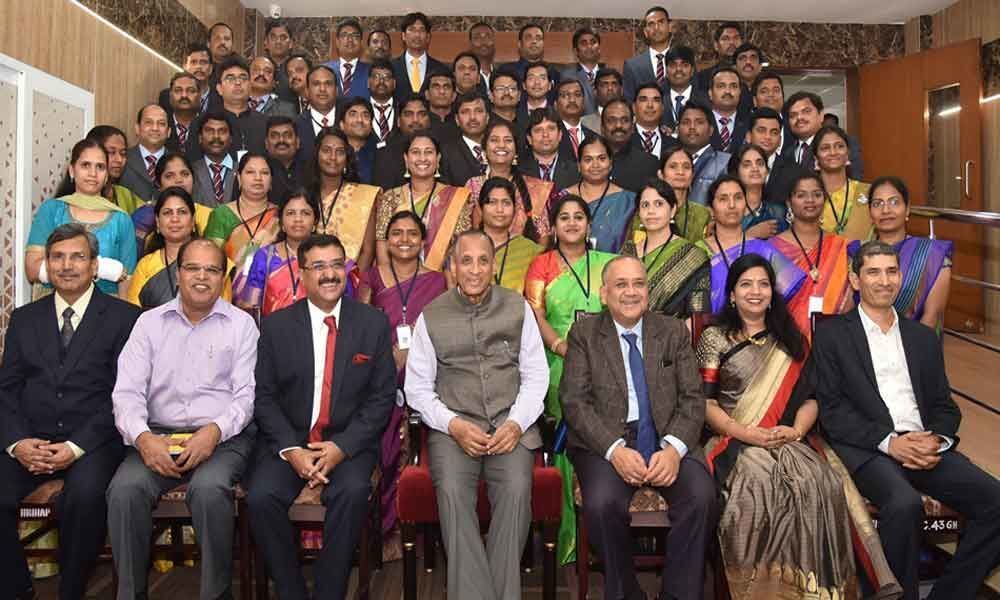 The prestigious second Foundation Course for the very-first batch of Group-I officers, after the formation of Telangana State, conducted by Dr MCR HRD Institute, concluded on Friday.

Jubilee Hills: The prestigious second Foundation Course for the very-first batch of Group-I officers, after the formation of Telangana State, conducted by Dr MCR HRD Institute, concluded on Friday.

Governor E S L Narasimhan, who was the chief guest at the valedictory function, advised the Group-1 officers to fully utilise their offices and powers thereby positively and earnestly to serve all sections of society.

He advised against any using brute authority in realisation of the goals of 'Bangaru Telangana.' "Developing empathy for understanding the pains and pathos of people and demonstrating sympathy in finding enduring solutions for their problems will be greatly instrumental in realising the dream of Bangaru Telangana," he told them.

The Governor called upon the officers to be available for people 24x7, thereby bringing about a qualitative and transformative change in their lives. "The historic reorganisation of the State into 33 relatively small districts provides a rare opportunity to the Group-1 officers to emerge as people-friendly leaders," he observed in this regard.

The Governor in his address dwelt on how the officers can contribute proactively to the multifaceted development of the state, rather than confining themselves to merely collecting revenue, endlessly tossing the files from one desk to another, and working mechanically as per the archaic rulebook. He stated that the general image of the officers in the society is that they are not people-friendly.

"The need of the hour in the present-day transparent world of work, characterised by emergence of strong social media, a vibrant civil society, and an ever-alert people at large, is to drastically change this image by diversifying and enriching their professional and personal competence, commitment and integrity," he added.

On the occasion, Narasimhan gave away Course Completion Certificates to the Group-1 officers and also presented mementoes to Nukala Uday Reddy, DSP (Civil) for Best All-Round Performance and to Perka Jayasudha, DPO, for securing Highest Aggregate Marks in written examination.

He also released a copy of 'Savvadi,' a journal brought out by the House Journal Society. B P Acharya, Special Chief Secretary & DG of the HRD Institute, in his welcome address said that the aim of the Foundation Course was to empower and inspire the Group-1 Officers to contribute their mite to the development of the State with outmost sincerity, integrity, and a sense of purpose.

"The Foundation Course, through a series of curricular, co-curricular, and extra-curricular activities, focused on developing the nature and quality of the Group-1 Officers, sensitising them to the needs of poor people, and instilling a sense of confidence and idealism in order to make them efficient in implementing different Government programmes," he added.