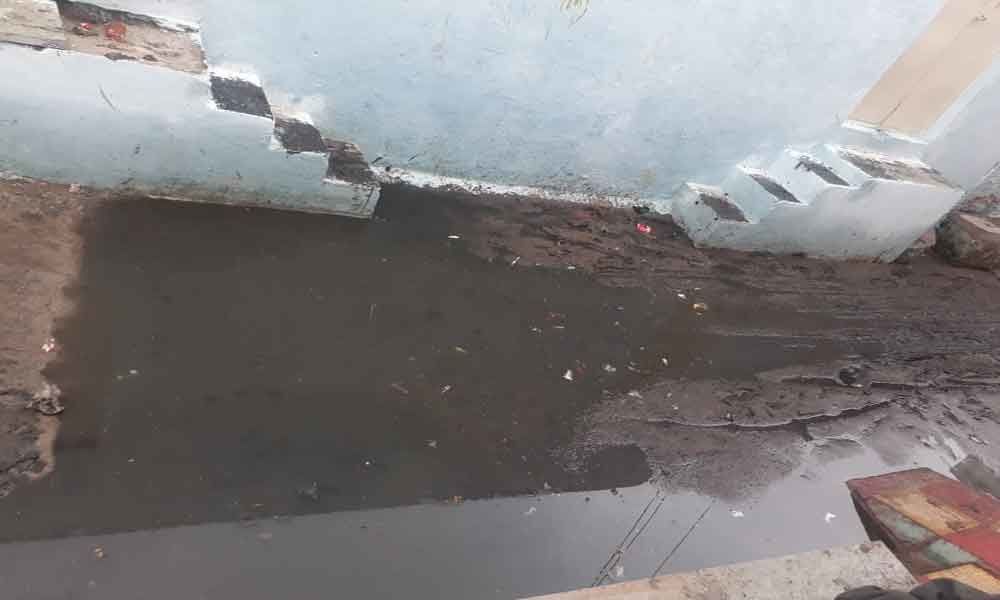 The residents of Rein Bazaar are forced to live in unhygienic circumstances, as civic authorities have failed not only to upgrade the sewerage pipelines, but also have not cleared the silt and wastage accumulated in the nalas at Sadat Nagar and nearby areas. Annual desilting works have yet to be taken up in those areas.

Yakutpura : The residents of Rein Bazaar are forced to live in unhygienic circumstances, as civic authorities have failed not only to upgrade the sewerage pipelines, but also have not cleared the silt and wastage accumulated in the nalas at Sadat Nagar and nearby areas. Annual desilting works have yet to be taken up in those areas.

Owing to the outdated network of old pipelines in Sadat Nagar area, the residents are forced to live in pathetic conditions. Every second day, sewerage leak has become a common phenomenon in the area. Even as the summer is at its peak, there is no sign of efforts like desilting of the nala to contain the situation. At Moti Nala in Dabeerpura, Ganga Nagar Nala in Sadat Nagar and Dhobi Ghat nala in Madannapet, the desilting works are yet to be taken up.

"In Sadat Nagar under Rein Bazaar division almost every road in the locality is filled with drain water. The civic officials clean the manhole and very next day it overflows again. The reason behind the overflow of drain is old pipe lines in the area and the nearby nala.

Due to this in last rainy season the residents of area had to suffer as it overflowed heavily. The sewerage water enters houses and around 250 houses were inundated. And now in summer season due to no desilting work in nala the drain leakage has become a common problem in area," said Abdul Rahman, a social activist.

Speaking to The Hans India, Abdul Rahman said that many representations were made to the local corporator and officials regarding the problem. They also demanded change of the drain pipeline. However only temporary arrangements are being made and no permanent solutions are being found.

Rahman also said that the annual desilting of major nalas in areas was done shoddily in the past. According to an RTI reply, an amount of Rs 9 lakh was sanctioned for the desilting works of the nala in area the previous year, but the works were mostly unscientific.

Speaking of the solution he proposed that sewerage and drainage pipelines be replaced with new pipelines in the whole area, as they are more than 25 years old. Each year politicians come and promise to resolve the issue, but the problem remains the same. Apart from rainy season, the regular drain overflow is common in area, he says.

"Due to the regular overflow in area, the roads in area have turned slippery and the wastage comes out of manhole and remains on roads. Besides bad smell, the areas have become fertile grounds for insects and mosquitoes, and due to this residents of area are suffering from many diseases," deplored Mohammed Wahed, a resident.

"Officials continue to promise solutions every time but we are made to suffer from the same problem," said a housewife in Sadat Nagar. Many residents also complained over the diseases in area due to the drainage overflow. "We residents are not allowing our children to come out on the roads, as it is filled with drain water," she added.