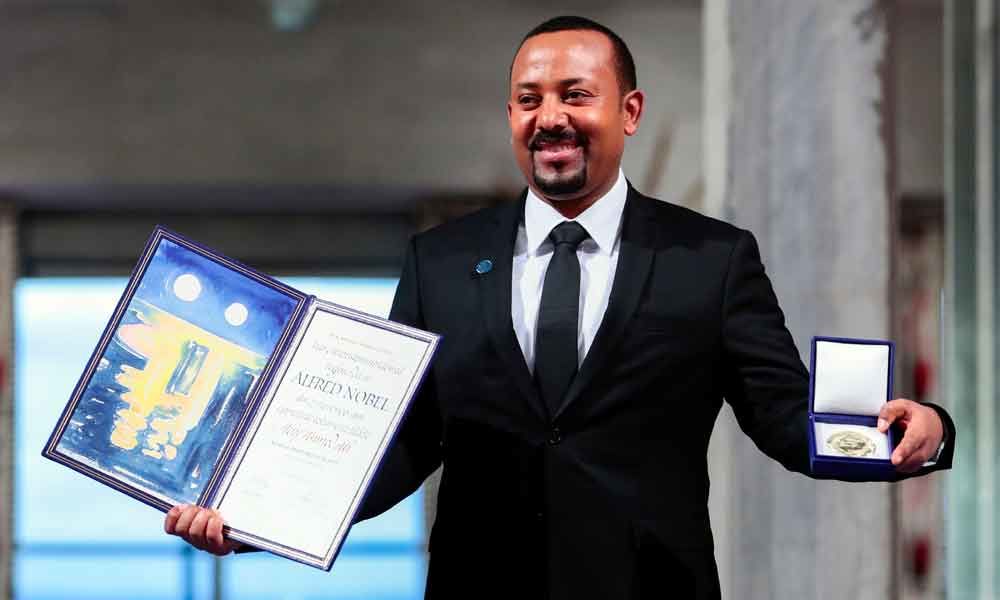 Ethiopian Prime Minister Abiy Ahmed hailed the role played by ex-foe Eritrea in the Nobel Peace Prize he collected on Tuesday for his efforts to...

Oslo : Ethiopian Prime Minister Abiy Ahmed hailed the role played by ex-foe Eritrea in the Nobel Peace Prize he collected on Tuesday for his efforts to resolve the long-running conflict between the two neighbours.

"I accept this award on behalf of Ethiopians and Eritreans, especially those who made the ultimate sacrifice in the cause of peace," Abiy said after he received the prestigious award in a formal ceremony at Oslo's City Hall.

"Likewise, I accept this award on behalf of my partner, and comrade-in-peace, President Isaias Afwerki, whose goodwill, trust and commitment were vital in ending the two-decade deadlock between our countries," he added.

Hailed as a modern, reformist leader, Abiy's decision to skip all events with the press has dismayed his Norwegian hosts.

Africa's youngest leader at just 43, he is to received the prestigious award at a ceremony in Oslo City Hall, attended by the royal family and Norwegian public figures.

The Nobel Committee announced in October it was honouring Abiy for his efforts to resolve the long-running conflict with neighbouring foe Eritrea.

On July 9, 2018, following a historic meeting in Eritrea's capital Asmara, Abiy and Eritrean President Isaias Afwerki formally ended a 20-year-old stalemate between their countries in the wake of the 1998-2000 border conflict. That was just three months after Abiy took office.

During the whip-fast rapprochement that followed, embassies reopened, flights resumed and meetings were held across the region.

Abiy's actions sparked optimism on a continent marred by violence, and he went on to play an important mediation role in the Sudan crisis and attempted to revive a fragile peace deal in South Sudan.

In stark contrast to his authoritarian predecessors, the early days of his mandate also saw a wave of democracy-boosting measures in Ethiopia, as he lifted the state of emergency, released dissidents from jail, apologised for state brutality and welcomed home exiled armed groups.